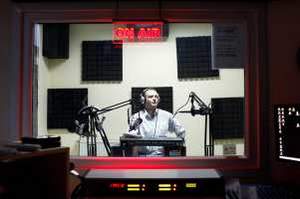 By Thomas Seibert
Foreign Correspondent of “The National”

ISTANBUL // As Turkey rapidly changes to a country embracing a turbulent chorus of dozens of languages and dialects from a state that once regarded linguistic diversity as a deadly threat to national unity, Mehmedali Baris Besli is determined to make the voice of his people heard.

Mr Besli, a 39-year-old lawyer in Istanbul, has been hosting a twice-monthly radio show called Radio Cixa, or Radio Castle, a cultural programme in the language of the Laz people of Turkey?s Black Sea coast. The show on Yasam Radyo, an independent radio station in Istanbul, has listeners from all over Turkey who tune in via the internet, Mr Besli said. He estimates that 1.5 million people of Laz descent live in Turkey, a country of 70 million.

Until recently, Radio Cixa and similar programmes on private radio stations were legally limited to one hour a day and a total of five hours a week, while television shows in non-Turkish languages were held to four hours a week.

The limits reflected a fear that a wide-spread use of non-Turkish local languages and dialects could undermine Turkey?s national cohesion.

But following a recent decision by Turkey?s media watchdog, private television and radio stations can obtain permission to broadcast programmes in the languages of least 28 groups and ethnicities, 24 hours a day.

The decision by the Radio and Television Supreme Council, or RTUK, was taken within the framework of efforts by the government in Ankara to solve the Kurdish conflict that has plagued the country for the past 25 years and has cost tens of thousands of lives. One key element of the government plan, named ?Democratic Opening?, is to strengthen the right of Turkey?s estimated 12 million Kurds to use their language publicly.

The proposed changes should also lead to improvements for such groups as the Laz, Mr Besli said.

?It is a positive decision,? he said about the RTUK move. ?But if the ?Democratic Opening? is in fact only meant for certain groups, it is not democratic but discriminatory.?

Turkey?s constitution says Turkish is the official language of the state. In the past, efforts to strengthen other native languages of Turkish citizens were discouraged and sometimes their proponents persecuted, especially if it involved the Kurdish language.

In the early 1990s, several parliamentary deputies of Kurdish descent were thrown into prison after one of them spoke some words in Kurdish during her swearing-in ceremony. Because Kurdish was seen as a vehicle of the Kurdistan Workers? Party, or PKK, a separatist rebel group, the language was banned.

Many restrictions have been lifted in the course of Turkey?s bid to join the European Union, but the government of Recep Tayyip Erdogan, the prime minister, wants to go further.

It has plans to allow the use of Kurdish and other minority languages in election campaigns and may allow auxiliary Kurdish courses in schools. Ankara has already given the green light for the establishment of Kurdish institutes at state universities and has introduced a 24-hour Kurdish television channel within TRT, the state television network. Mr Erdogan himself spoke some words of Kurdish when the channel, TRT 6, went on air last January.

Mr Besli said he was concerned that the state was trying to limit the majority of reforms to the Kurdish language. He said he had asked TRT for permission to broadcast some hours of shows in the Laz language a day but was turned down. Now he is taking TRT to court.

?We want to prevent our language from becoming extinct,? said Mr Besli, who is also the leader of a Laz cultural organisation. ?For us, the survival of the language is at stake.?

As the language is not present on television and is not taught in schools, it is hard to keep the tradition alive, he said. ?At home, I only talk Laz to my daughter. Otherwise she would not be able to learn it.?

Nationalists say efforts to strengthen the use of minority languages pose a threat to the state. By allowing Kurdish programmes on TRT, Mr Erdogan had ?made a gesture to the mountain cadres? of the PKK, Devlet Bahceli, the leader of the right-wing Nationalist Movement Party, said in a recent speech. Mr Bahceli said the ruling Justice and Development Party, or AKP, was putting Turkish identity at risk. ?As a consequence of the so-called opening by the AKP, our Turkish language will stop being the official language.?

Laz, a Caucasian language, is one of more than two dozen languages and local dialects that could ben efit from the recent RTUK decision, media reports have said. The reports listed languages like Ispanyolca, the old language of Turkey?s Jewish community, and Pontusca, the language of a tiny Greek minority on the Black Sea coast, as well as languages from all parts of Anatolia. Armenian, Greek and Hebrew have a special status because they are the languages of the only minorities officially recognised by the Turkish state, the Armenians, the Greeks and the Jews.

Mr Besli said he was campaigning to make sure the Laz language would be there for future generations. ?We want Laz television programmes on TRT, Laz courses in schools and the reinstatement of Laz names of towns and villages,? he said. ?Languages are the wealth of Turkey.?

Photo: Mehmedali Baris Besli has been broadcasting a twice-monthly radio show in Laz. Kerem Uzel / NarPhotos for The National