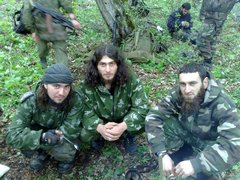 The institution of mujahideen(1) in its current format was arranged in 1980-1990th during the war in Afghanistan and was connected with the realities of the ?cold war?. During the whole war in Afghanistan (1979-1988) the US, particularly through the Saudi and Pakistani special services, furnished large-scale financial and military assistance to the groups fighting against Soviet army. As a result, after the end of the war and the withdrawal of Soviet troops the resource of the Afghans and Arab Afghans(2) who had a big military experience was formed and which later attached special significance to the war in the name of Islam and the idea of ?Islamic solidarity? and was involved in the military actions in Algeria, Central Asia, the Balkans and Caucuses. That very resource was used while planning and arranging a number of international terrorist acts.

From the very beginning of the conflict in Nagorno-Karabakh Azerbaijan had a certain expectations from Islamic circles in the issue of the settlement of the conflict and the collaboration with those circles seemed to be promising. After the independence Azerbaijan underlined its belonging to the Muslim world, trying to make religious accents in Armenian-Azerbaijani war.

In 1993, when the military forces balance cardinally changed in the favour of the Armenians Azerbaijan (after the accession to the power of Heydar Aliyev) made certain steps to include in the military actions the mercenaries who were enlisted in different Islamic countries, mainly mujahideen. In 1993 the minister of internal affairs of Azerbaijan Rovshan Zavadov met the prime-minister of Afghanistan and the leader of ?Hezbe Eslami? (?Islam party?) Gulbeddin Hekmatiar and reached to an accommodation about sending mujanideen to Azerbaijan. And in several months an Afghani delegation, which included the well-known Afghani field commander Rashid Dustum, visited Baku to discuss on the state level the issues concerning approved collaboration. As a result the air communication was established between Baku and Kabul. Among the mojahideen sent to Azerbaijan Afghans prevailed (though there were also Arab Afghans). They were mainly fighters of ?Hezbe Eslami? group. According to the convictions of separate experts the redeployment of mojahideen to Baku could not be implemented without the assistance of Pakistani and American special services.

The exact number of the mojahideen who were involved in the military actions has not been specified till now. That number varies within the range of 1000-3000. In one of the publications of ?Washington Post? for 1994 it was mentioned that the mercenaries from Afghanistan, Iran, The United States, Russia and Turkey were included in Azerbaijani army, and particularly Turkey and Iran provided Baku with military instructors. The same source, referring to the western diplomats, mentioned that in 1993 Azerbaijan enlisted 1000 Afghan mojahideen.

According to some information mojahideen were mainly placed in the south-eastern districts of Nagorno-Karabakh front, i.e. in the line of Fizuli and Zangelan. They did not associate with Azerbaijani soldiers and this was conditioned by several factors. Azerbaijani soldiers did not follow the norms of Sharia, used alcohol drinks and this caused confrontation between the parties. Besides this mojahideen felt repugnance towards Slavonic mercenaries, fighting in Azerbaijani army. Azerbaijani authorities tried to conceal the participation of mojahideen in military actions. In order not to publish the issue they concealed the real number of losses among Afghanis and sent not all the bodies of killed mojahideen to Afghanistan(3).

In this connection it is also remarkable that on December 21, 1994 the letter addressed to the Special Rapporteur of the Commission on Human Rights on the question of the use of mercenaries, where the Authorities of Armenia expressed their complain with the fact that Azerbaijan used extensively the mercenaries in the war in Nagorno-Karabakh(4). The information about the mercenaries (from the CIS and other countries: Iran, Turkey and Afghanistan) in the letter was substantiated by appropriate sources. There was a number of evidences concerning mojahideen, the spheres where they had served (860 and 723 motor brigades, air, ground forces, artillery, special services) and the districts of their dislocation (Jdanov, Shamkhori regions, the region adjacent to Mingechau, city of Al-Bayrami) were mentioned and the names of 12 mojahideen enclosed. One of them was Bakhtiyar Verbollah Baberzain (from the city of Mozari Sharif), who had been captured by Nagorno-Karabakh forces and with whose help a number of facts concerning mojanideen were disclosed.

Though the Azerbaijani authorities deny the involvement of mojahideen in the military actions, it is a proved fact, which is based on the bodies of mojahideen (in their traditional clothes) killed during the war and their documents in their traditional languages (Dari and Pushtu), the religious literature published in Afghanistan and Pakistan and other material proves found by the defense forces of Nagorno-Karabakh.

Recently there has been an interesting research carried out by the Michael Taarnby from Real Instituto Elcano Spanish research centre concerning the involvement of mojahideen in Nagorno-Karabakh war(5). He emphasizes a number of issues in his ?The Mujaheddin in Nagorno-Karabakh? case study, i.e. the issue of the involvement of mojahideen in Nagorno-Karabakh war and their role in the subsequent Jihad movements. He divides mujaheddin, who were in Karabakh in three main groups. The first group includes those who passed from Azerbaijan to other Caucasian regions and were involved in other conflicts; the second includes those who settled in Azerbaijan (those who became the stronghold of militant Islam in Azerbaijan): and in the third group are deceased Afghanis.

In the opinion of the researcher, the majority of the mojahideen who had passed through the war returned home, the other part was mostly involved in anti-Russian struggle, i.e. in the war in Chechnya where they used the experience from Nagorno-Karabakh war. Among them was a citizen of Saudi Arabia the well-known field commander of Chechen descent Hattab, who after the Jihad in Afghanistan had been involved in the anti-governmental Islamic movements in Tajikistan and then in war in Nagorno-Karabakh. Using the contacts he gained during Karabakh war, Hattab passed to North Caucasus (Chechnya and Dagestan) and was one of the key persons in Jihad movement until he had been killed (in 2002). In his interview dated 2005 the commander of the Azerbaijani army Azer Rustamov mentioned that hundreds of Chechen volunteers under the command of field commanders Shamil Basaev and Salman Raduev fought during the war in Nagorno-Karabakh. But due to the heavy casualties they were obliged to leave.

M. Taarnby makes rather interesting observation. He mentions that war in Nagorno-Karabakh stayed beyond the vision of international Jihad movement. There have been almost no manipulations on this issue in the oratory of militant Islam. Though there were many mojahideen killed in that war none of the leaders of Jihad movement (including Bin Laden) ever turned to that item. In the opinion of the researcher, this is mainly conditioned by the fact that in Nagorno-Karabakh war Azerbaijani side was defeated. Besides this, as Taarnmy mentions, mojahideen were engaged in the war mainly as mercenaries.

The involvement of mojahideen in the war in Nagorno-Karabakh in a certain manner encouraged the establishment of radical Islam structures (including Wahhabi) in Azerbaijan. Since 1990th a number of branches of international radical Islam organizations (?Hizb Attahrir?, ?Tablighi Zamaat?, ?Al-Jihad Al-Islam?, ?Jeish Ul-Islam?, ?Al-Djihad? and others) have been working in Azerbaijan. The territory of Azerbaijan had been often used to supply weapons, financial, material and other means and fighters to Chechnya and Dagestan.

After the 9/11, according to the American media, mainly New York Associated Press, the Congressing Research Service in its repot, which was published on September 10, 2001, stated that separate groups and individuals who was connected with Osama Bin Laden and ?Al Qaeda?, used the territory of Azerbaijan as a stronghold of terrorist network. It was mentioned that in 1998 after the explosions in the American embassies in Nairobi (Kenya) and Dar Es Salami (Tanzania) the FBI established 60 telephone calls between Bin Laden and his associates from the branch of ?Islam Jihad? (?Al-Islam Al-Jihad?) in Baku. (It is not a mere chance that after the events on September 11 many had spoken about the possible Azerbaijani trace in that terrorist act). In that period and after 2001 there was a pressure of Washington on Azerbaijan. They demanded to struggle against radical Islamist organizations and Azerbaijani authorities initiated that struggle. But even today there is a possible threat of Islam radicalization and special services of the country always keep it in the field of vision.

In fact, war in Nagorno-Karabakh was the first test mojahideen passed in post-Soviet space. Armenian defense forces, as a matter of fact, succeeded in standing against international Jihad structures. The heavy defeat of Azerbaijan in war in Nagorno-Karabakh and the heavy casualties of Afghans compelled them to leave Azerbaijan and move to North Caucasus and the Balkans.

(1) In Islam mujahid (descent from Jahada root) is a warrior fighting in the name of God and faith. In Islam world this notion is widespread and characterizes those persons who are engaged in national, social and religious and political movements. In the Western and Russian media and in scientific literature in general while saying mojahid very often they mean radical Islamist fighters.

(2) Arab Afghans are the volunteers from different Arab countries who fought in Afghanistan and whose activity during and after the war have been coordinated by the citizen of Saudi Arabia Osama Bin Laden, who on the basis of information collected about mojahideen arranged in 1988 the terrorist organization ?Al-Qaeda? (literally base).

(4) See: Letter dated 21 December 1994 from the Deputy Minister for Foreign Affairs of the Republic of Armenia addressed to the Special Rapporteur of the Commission on Human Rights on the question of the use of mercenaries (http://www.un.org/documents/ga/docs/50/plenary/a50-390add1.htm):

(5) Michael Taarnby, The Mujaheddin in Nagorno-Karabakh: A Case Study in the Evolution of Global Jihad http://www.realinstitutoelcano.org/wps/portal/rielcano_eng/Content?WCM_GLOBAL_CONTEXT=/Elcano_in/Zonas_in/International+Terrorism/DT20-2008