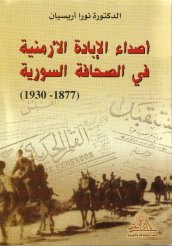 AZAD-HYE (9 December 2004): In November 2004 the latest book of Dr. Nora Arissian was published by “Al Zakira” Printing House in Lebanon under the title: “Echoes of the Armenian Genocide in the Syrian Press (1877-1930)”.

The book, which is one of the first publications dedicated to the 90th anniversary of the Armenian Genocide (coincides next year 1915-2005), is the result of the young author's incessant research in the Syrian archives, including the press (specifically the period 1877-1930), an important and almost unexplored source for Genocide documentation.

The Syrians witnessed the Ottoman atrocities and the sufferings that befall on both the Armenian and the local Arab population. This fact had led the researcher to examine more than 30 Syrian political publications, collecting and analyzing relevant information.

Many Syrian writers, journalists and columnists have found it imperative to describe those atrocious events, the last episodes of which occurred on Syrian itself (Der Ez-zor, Margada, Maskana and other places evoke awful feelings among the Armenians).

This book is a logical continuation of another book by the same author published in the year 2002 and carried the title: “The atrocities of the Armenians in the Syrian mind. The position of the Syrian Intellectuals toward the Armenian genocide”.

The official Syrian periodicals of the time, such as “Al Asima”, “Alef Baa” and “Al Muktabas” (all issued in the capital ) had hosted hundred of articles concerning the Armenians: details of the massacres, the deportations and the eventual settlement in the main cities of the country.

There are revealing articles describing how Armenians were tortured during their deportation trail to the Syrian wasteland. It is worth mentioning that the local Arab population protected the unlucky refugees and tried to save as many souls as they could, by offering shelter and means of survival.

Dr. Arissian notes that the Syrian periodicals did not hesitate to name what was happening as “Genocide” (as early as 1916), besides other expressions such as “extermination”, “uprooting of the race”, “annihilation”, etc.

Below are the main headings of the chapters:

Bibliography of the articles

Texts of some articles