Recent articles in the mainstream media would have us believe that governments around the world somehow question the factuality of the 1915 Armenian, Assyrian and Greek genocides committed by Turkey. These articles would also have us believe that the Turkish government?s latest temper tantrums over these genocides are justified. Turkey, of course, just recalled its ambassadors to protest the passage of resolutions by the U.S. House of Representatives? Foreign Affairs Committee and the Swedish Parliament that acknowledged Turkish culpability for these genocides.

Despite what today?s mainstream media are declaring, the evidence proving the 1915 genocides is overwhelming. And formal resolutions affirming these unpunished crimes against humanity made appearances around the world long before 2010. Regardless of what pro-Turkish apologists would have us believe, the issue has never been about whether the Turkish regime carried out genocide. Rather, it has always been about when Turkey would be punished and deliver reparations and restitution to the rightful, indigenous inhabitants.

Powerful media elites would have us believe that the mainstream media universe has been devoid of criticism for Turkey?s unpunished crimes because such voices are either non-existent, marginal, irrelevant, fabricated or some combination thereof.

What the media elites fail to tell us is that when these critical voices — from victim ethnic groups or elsewhere — come forward to submit letters, opinion pieces, or quotes, they are usually denied access.

Media elites also neglect to tell us that opinions that do not reflect the official narrative spun by Turkey — not to mention Israel and the U.S. — largely go unpublished. Authoritative voices that would discredit mainstream media?s official narrative of the genocide issue are removed from the elite?s ?golden Rolodex? — the name given to describe the small group of establishment-approved ?experts? who are most frequently quoted in news stories or asked to appear on television.

The absence of dissent in the mainstream media and in the halls of power does not mean that the victims of the genocides and their descendants are insignificant, apathetic or deceitful. No, we are alive, awake and infuriated.

The media are also telling us that we should sympathize with Turkey because it feels ?humiliated? by accusations of genocide. Turkey uses this word to describe its anger that its national honor has somehow been injured by such accusations. Do Turkish, Israeli and American officials know what ?humiliation? means to the survivors and descendants of the Armenian, Assyrian and Greek genocides who experienced debasement and degradation during the genocidal ordeals and are forced to endure denials and demeaning treatment right up to the present day?

And how did humiliation of the victims occur? By order of the Young Turk regime, unarmed civilian subjects — Armenian, Assyrian and Greek men, women and children — were raped in broad daylight, in front of their families and neighbors. The tortures and violations were beyond one?s wildest imagination. Innocents were skinned and burned alive. Their tongues and fingernails were torn out. Horseshoes were nailed to their feet. They were stripped naked and sent on death marches into the desert. Women?s breasts were cut off and their pregnant bellies bayoneted. Fetuses were thrown up into the air and impaled on swords and bayonets for sport. Men were tied to tree limbs that were bent towards one another. When the tree?s limbs were released, the men?s bodies were torn in half. Women were tied to horses and dragged to their deaths.

Those Armenians, Assyrians and Greeks who were not exterminated, enslaved in harems, or kidnapped and forcibly converted to Islam were driven from their indigenous lands. Those who survived the death marches spent the rest of their lives in exile, uprooted from their culture and civilization, grieving for their slaughtered families and yearning for their ancestral homeland.

Media elites are giving voice to embroidered Turkish ?humiliation? and not to the real humiliation of the victims, survivors and heirs who live with constant anguish in the face of torture, dispossession, contempt and indifference. Media elites are defending Turkey when it is the martyrs and their heirs who deserve mercy and compassion.

In spite of Turkey?s efforts to humiliate the victims at the time of the genocides — and to prolong this humiliation up to the present day with cultural theft, trivialization and scapegoating — the dignity of the victims and their descendants has, remarkably, remained intact.

Turkey?s genocidal crimes have gone unpunished. While continually profiting from the homes, farms, lands, properties, institutions and possessions confiscated in 1915, Turkey even accuses the victims and survivors of the crimes that it itself committed. And media elites portray ongoing survivor grievances as nuisances that impede ?progress.?

It is the genocide deniers — the rulers and lobbies of the U.S., Turkey, Israel, and Azerbaijan — who are the ones impeding progress. Their denial, duplicity and audacity do not mean that the genocides? victims and their heirs have been defeated. Denying the truth does not invalidate it. Fictional Turkish ?reconciliation? initiatives foisted upon Armenians, Assyrians and Greeks will never take the place of genuine atonement and restitution, which are necessary for true progress to be made.

To these deniers and obstructionists we say, ?Your tactics are transparent. The perpetrators, beneficiaries and enablers of the ongoing genocide against the Armenian, Assyrian and Greek peoples will be brought to justice. You can hide from the truth, but you can?t hide the truth. We will persist, and the truth will prevail.?

Lucine Kasbarian is a descendant of Armenian and Assyrian genocide victims and survivors, and the author of ?Armenia: A Rugged Land, an Enduring People? (Dillon Press/Simon & Schuster).

Published in Azad-Hye with the permission of the writer. 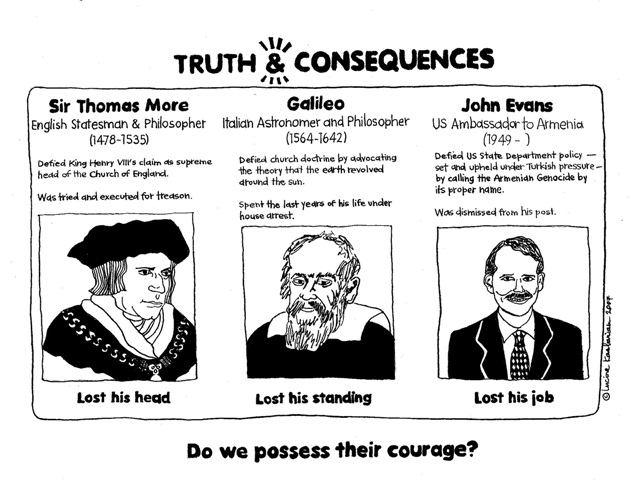