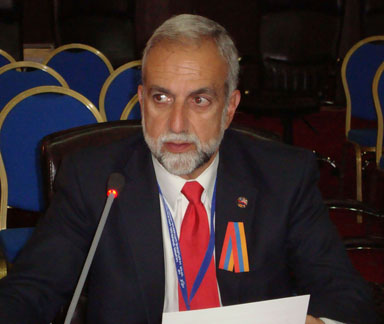 YEREVAN?Armenian National Committee of America Chairman Ken Hachikian delivered a strong message of hope and commitment at the 2011 Armenia-Diaspora Conference, organized by Armenia?s Ministry of Diaspora, on September 18-20th.? The conference coincided with 20th anniversary celebrations of the Republic of Armenia, marked on September 21st.

Hachikian?s full statement, presented during the session focusing on efforts to strengthen Armenia-Diaspora cooperation, is provided below.

We are gathered here together, once again, the proud sons and daughters of our ancient tribe.

We have come to our homeland ? our Hairenik ? from around the world to celebrate our freedom, to measure our challenges, and to chart our path forward.

We each have traveled a different path to this hall. We bring with us different experiences and expectations. And yet, in all our rich diversity, we are united as Armenians.

This year, we are brought together to celebrate a generation of freedom. Twenty years of independence. Two decades of trial and trouble, but also of triumph.

We celebrate this milestone in our nation?s long journey with a profound appreciation of the will and wisdom ? the service and sacrifice ? that have brought us to this great moment in our history.

We recognize, as well, that the greatest challenges for our homeland and Diaspora lie ahead, for the independence of the our two Armenian republics represents the realization of our shared hopes as well as the foundation upon which we will, together, build a strong and healthy, free, independent and united homeland.

We welcome this discussion of strengthening Armenia-Diaspora relations ? which are, as is, by now, clear to all, vital to the very survival of the Armenian nation.

This bond burns in the hearts of Armenians across the globe.

? It is a relationship built upon our common identity.

? Informed by our common values.

? Inspired by our common aspirations.

? And given strength and durability by our diversity.

For this partnership to endure and to grow ? for our relationship to meet the unforgiving challenges of today and the unforeseeable tests of tomorrow ? it must rest upon a foundation of trust and mutual respect.

Whatever the means or mechanisms we might envision, none will work without mutual trust.

And trust must be earned. Respect must be deserved.

Without trust and respect, we will fail to foster the types of broad-based, open and ongoing dialogues on the issues facing the Armenian people that will lead to consensus on the practical priorities of the Armenian nation.

Without them, we will forever question motives, fearing the worst, when we should be focused on doing our best.

There is no better example to illustrate the costs of a deficit of trust and respect than the failed Turkey-Armenia Protocols. These flawed and now failed accords, negotiated secretly, recklessly traded away ? squandered is a more accurate description ? the collective capital created by Diasporan community activists over the course of many generations.

The Protocols directly damaged the Armenian nation?s interests, meaningfully compromised the pursuit of our cause, and materially undermined the rights of our people?all while advancing Ankara?s agenda.

Beyond even these terrible costs is the incalculable damage done to the fabric of trust and respect between the Armenian government and Armenian communities world-wide. Just when we should be focused on cooperating in the face of mounting threats, the Protocols process -from the backroom deals that gave them birth to the government?s continued refusal to withdraw its signature from these dangerous documents ? reinforced the worst fears among Diasporans.

Sadly, these fears are mounting, across the board.

In terms of foreign policy, economic corruption, deficits in democracy, and in so many others areas, we are witnessing a widening credibility gap between the Armenian government and the Diaspora as well as with its own citizens.

Just as our calls for a truthful and just resolution of the Armenian Genocide are undermined by the Protocols, so too are our efforts to promote Armenia internationally countered by charges of undemocratic conduct, and our work creating economic opportunities met with accusations of widespread corruption.

These failings are used cynically by our enemies and opportunistically by even our political allies. Fairly or unfairly, they provide a ready excuse and an easy answer for those who seek to escape their responsibilities to the Armenian people.

We must mend the torn fabric of the Armenian nation.

In seeking to restore trust and respect to Homeland-Diaspora relations, we are inspired by the knowledge that, throughout our long history, generations of Armenians have overcome far greater challenges.

We all know our history. We understand that time and again we done what we must to maintain our identity and preserve our homeland. The war for Artsakh in our own lifetimes speaks to this powerful tradition.

Given the realities we face, Turkey and Azerbaijan?s aggression among them, we must ? as a requirement of survival ? prioritize the creation of an enduring partnership between the Hairenik and Diaspora.

In the United States ? and throughout the Spiurk ? in a healthy relationship of trust and respect with the key governmental and civil society stakeholders in the homeland:

? We must continue to pursue a confident, assertive brand of Diasporan advocacy that builds upon, but is not bound by, our past.

? We must expand Armenian power and influence globally, building a far-reaching network of identity and strength that serve as both sword and shield for Armenia?s security and survival.

? We must carve out spheres of influence in the power centers of the world.

? And we must constantly challenge, and when necessary confront, forces aligned against the Armenian nation, whoever they may be.

The ANCA, working in the United States on behalf of American citizens of Armenian heritage, takes on these challenges every single day, leading a far-reaching grassroots movement seeking justice for the Genocide, security and strength for Armenia, freedom for the people of Artsakh and the independent Republic of Nagorno Karabakh, and strength and security for Javakhk. I just returned from 4 days in Javakhk and it is apparent that we face significant challenges there, which, working together, we can overcome.

We must do all these, and more, for an engaged and effective Diaspora is essential to Armenia?s welfare and vital to the realization of our national ideals.

As you know, we bring to this task, an organization, built upon a powerful grassroots foundation that has ? with devotion and sophistication ? carried the Armenian Cause forward in America for more than a century.

Our more than 50 chapters throughout the United States work tirelessly on behalf of the Armenian Cause.

In each of the issues we advocate, we face powerful and well-funded opposition. Arrayed against us are some of the most influential groups in the American political system.

We have met their challenge by expanding our own resources, establishing a new permanent headquarters in Washington, DC and building an endowment fund to finance our growth in the years to come.

We have a renewed focus on strengthening our grassroots, both in our larger communities as well as in areas not traditionally populated by large numbers of Armenian Americans.

And so, in closing, let me say that the key to our collective success is to remain confident in our strength, the abilities of our youth, the ultimate morality of our positions, and the devotion of the Armenian people to the just cause of the Armenian nation.

We must ? here today on the free soil of an independent homeland and long after we have left this hall ? carry forward the burden of our generation so that we may realize ? for ourselves and for generations to come ? the promise of a prosperous, free, independent and united Armenia.