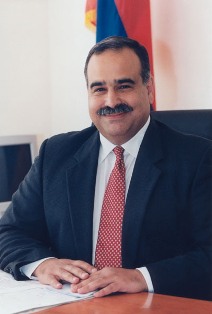 Yerevan ? The second anniversary of blitzkrieg between Russia and Georgia underscores the unresolved geopolitical undercurrents in this region among the seas.  Landlocked by the forces of history from the Caspian, the Black and the Mediterranean, Armenia?s pivotal position remains encircled by a neighborhood in strategic turmoil.

The inherent jeopardy flowing from Turkey?s now obviously disingenuous engagement of Armenia, the challenges posed by Azerbaijan?s graduation from its threatening language of war to its launch of a deadly attack in June, and the general escalation of tension across the Caucasus have combined to define the greater region as one at immediate risk of deepening instability.

Against this backdrop of system-wide insecurity, Armenia is now facing a dangerous alignment of outside interests and internal shortcomings.

While Yerevan?s ?strategic? relationship with Moscow continues to serve as the bedrock for regional peace and security, the nature of the Armenian-Russian embrace is unduly lopsided.

The asymmetry of the Russian-Armenian relationship is most manifest in the fundamental lack of equal and mutually respectful cooperation.

After all, Armenia?s hosting of the only Russian military base in the area is no simple act of kindness, and must be anchored in a shared regard for each other?s interests.

What is more, the Russian base is the only such facility outside of the Russian Federation where the host country receives neither rent nor reimbursement.  Armenia pays for the totality of its costs and expenses.  Such a mortgaging of Armenian national security is unacceptable and demands immediate redress.

In the new era, Armenian-Russian partnership, in order to be strategic without quotation marks, must be sincere, really reciprocal and based on horizontal respect, despite the differences in size and experience between the two nations.

A case in point is the information recently leaked by the Russian media and reactively confirmed by official Yerevan that the two states, either bilaterally or under the auspices of the Collective Security Treaty Organization (CSTO), intend to extend up to 49 years the treaty arrangement for the Russian base and the deployment of forces there.  Matters of dignity aside, this flies in the face of Armenian sovereignty, foreign policy independence, and vital national interests.  It also flouts the unlimited future potential of an actually strategic partnership between us.

This holds especially true in view of the fact that the existing base agreement does not expire until 2020 and can, if necessary, be extended upon expiration for five or even ten years.  Of further consternation is the Kremlin?s military rapport with and sales to Ankara, which stands in occupation of the historic Armenian patrimony, has imposed a modern-day blockade of the Republic of Armenia tantamount to an act of war, and continues to deny and shirk responsibility for the Genocide and Great Armenian Dispossession of 1915.

A more contemporary source of outrage is Moscow?s military support for Azerbaijan, which having launched a failed war of aggression against Mountainous Karabagh and Armenia is today threatening renewed hostilities, completing its occupation of the Armenian heartlands of Shahumian, Getashen, Artsvashen, and Nakhichevan, and continuing with impunity to destroy and desecrate the Armenian cultural heritage at Jugha and elsewhere.

In this connection, in the event that Russia indeed carries through with the reported sale of its S-300 weapon systems or other equivalent armaments to the aggressive, belligerent, and revisionist regime of Azerbaijan, Armenia should withdraw forthwith from the CSTO, of which it is the sole member from the region, or at the very least require full fair-market rent for the Russian base together with reimbursement for water, electricity and other relevant expenses.

And finally, the ultimate achievement of Partnership between Russia and Armenia, and between Russia and the West, will necessarily entail an actual application of the Rule of Law?not only domestic but also international?and hence the recognition of the Republic of Mountainous Karabagh within its constitutional frontiers, as well as of Kosovo and Abkhazia.

Anything else is partisan politics, petty political gain and sui generis dissimulation, all of which might make sense for some and for the moment but at bottom run counter to the aims of peace, security, justice and democratic values for the critical landmass amid the seas.