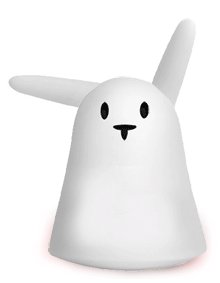 French wi-fi rabbit debuts in the

A CNN tech report, an article in the New York Times, top tech blogs like Engadget all gush about Nabaztag, a cute plastic rabbit with wifi-superpowers that makes it the first known wifi-toy on this planet. To French technophiles, this is old news. Nabaztag was born in in mid-2005.

50,000 rabbits have been sold since in , where an on-line cult is developing around the tech-pet. Sold on line or at high-end retailers for the not cheap price of US$150, it now tackles the North American market.

What does this 9-inch bunny do, exactly? Nothing robotic. Everything wi-fi. With a Nabaztag at home, you don't have to stay glued to your desktop to stay tuned. Your rabbit will flash colored signals, tweak its ears, sing, talk, to keep you informed of what goes on in your online life while you are busy in the kitchen or watching TV in the lounge.

Given a power outlet and a wifi connection, it warns you of incoming mail, activity in your RSS reader, briefs you on stocks price, air quality, weather,trafic conditions in your town (or on the other side of the world). What else? Wake-up calls, text-to-voice SMS and mails, domotic alerts (red cheeks? you forgot to close the garage door! ). And a few fun options, such as Tai-Chi classes for your rabbit, or marrying two bunnies to synchronise their tasks and ear-positions through rabbit-to-rabbit communication. Some services are free of charge, others require a paying subscription.

Nabaztag has a story. It was created by Rafi Haladjian, a French Net entrepreneur. Why a rabbit? “Because, by pure chance, there was a toy-rabbit sitting on my desk when we brainstormed about a non-intrusive object that didn't need a screen to provide information in the home.” Why name it Nabaztag? “Because it's the word for rabbit in , my parents' country.”

Nabaztag is not Mr Haladjan's first venture. In 1993, he founded FranceNet, the first French Internet provider, then Fluxus (sold to British Telecom), and now manages Ozone, an Internet thought wi-fi network, as well as the Violet company, a design studio of “smart objects.”

Nabaztag is Violet's first release. A test run of 5,000 Nabaztags sold out within a few days in in July 2005. The company main challenge nowadays is to keep ahead of the demand, while working on brothers and sisters for Nabaztag, a whole family of smart objects.

In , Mr Haladjian is considered an expert on the future of the Internet. He believes in the dawn of “Pervasive network,” a concept he frequently lectures about at universities and French think tanks. He forecasts that Internet connection, thanks to wifi technology, will soon become as natural and expected as electric power or 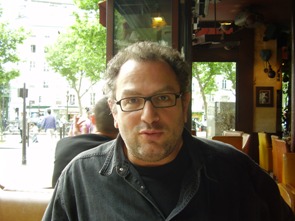 running water in homes. At least, in industrialized countries. Screens, desktops, UC towers will then be cumbersome things of the past. Borders between the physical and digital worlds will slowly be erased. Smart objects in your home and life will link directly to a wifi flow of orders and information. Mr Haladjan intends to make those not only intelligent but beautiful, poetic, soothing and, above all, not intrusive.

Right now, cuteness is obviously Nabaztag's main asset. But will the tech-bunny become a mainstream household feature? A survey on the Nabaztag French blog profiles users and their motives for adopting a wi-fi rabbit. One French fan uses it daily to check on weather and traffic conditions in () where her boyfriend lives. Another writes candidly about what hooked her to her tech-pet: “Nabaztag makes me feel superior. I am the only one who understands what my rabbit is telling me.”

2- Rafi Haladjian takes a break in a cafe: the creator of Nabaztag is at work on a new breed of smart objects for the Internet age

Newer PostIs Qatar the next Dubai?
Older PostConference on Armenia’s economic development in the University of California, Los Angeles