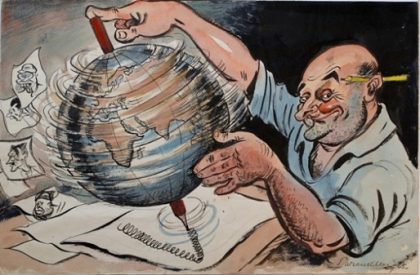 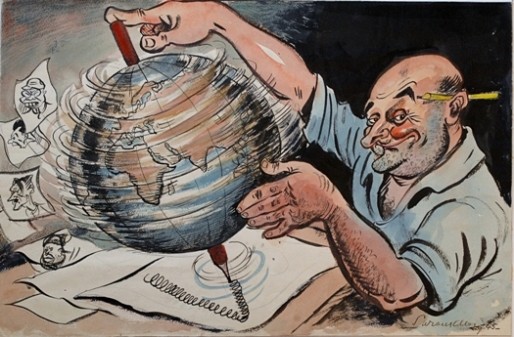 Egyptian-Armenian cartoonist / caricaturist whose drawings have appeared in a number of Arabic and international newspapers and magazines. He is considered one of the best and most famous caricaturists in the Arab world.

Early life
In 1908 at age ten, he moved to Turkey where he studied languages. With his brother Levon Saroukhan, he published a weekly magazine. Later on Saroukhan worked as a translator of the Russian, Turkish and English languages in the British army. At the same time, his caricatures were published in Armenian newspapers and magazines, and notably in the satiric paper “Javroush”. In 1922 he left Turkey to Europe and studied at the Brussel's Graphic Art Academy where he excelled and finished his studies in 2 years instead of the usual 4.

Career
In 1924, Saroukhan left for Egypt with more than 125 pieces of his art work. His drawings were published in a satiric magazine called “Armenian Cinema”.

Saroukhan presented some of his works at an exhibition in Cairo and then in Alexandria in Egypt. Through these exhibition, he met an Egyptian journalist Mohamed El-Tabii. Cooperating with each other, the two became the most important and influential journalists in Egypt for 20 years. Saroukhan worked as a caricaturist for the widely circulated “Rose el-Yusuf” paper where El-Tabii was editor. Saroukhan's first drawing that appeared on the cover of the magazine was that of Rose el-Yusuf in March 1928. From then on, Saroukhan became known as a 'political' caricaturist.

His fame was also established through his character “El Masri Efendi” (meaning Egyptian Efendi in Arabic). However, because of a dispute between Rose (aka Fatima) el-Yusuf and Mohamad el-Tabii, Saroukhan left the magazine and joined the staff of another Egyptian well-known paper called “Akher Sa'a” (Last Hour) which el-Tabii published until 1946.

When Mohamed El-Tabii sold “Akher Saa” to “Akhbar El Yom” (Today's News in Arabic), Saroukhan moved to the new newspaper and worked for it until his death in 1977.

He established an Egyptian French-language humour magazine “La Caravane” in 1942 until its closing in 1945. He also contributed to Egypt's foreign language press, with cartoons in “La Presse Egyptienne”, “Image” and Armenian daily Arev. He had many exhibitions in Egypt, Lebanon, Syria, Romania.

Publications
Among Saroukhan's publications is “This War” in which he warned of the coming of World War Two. It is considered to be his finest book as it defined his talents to discover humor in criticism.

The Saroukhan style was prominent, independent and famous as he drew more than 20,000 different caricatures - political, social or humorous. Other publications include “The Political Year 1938”, a collection of political caricatures, a book in Armenian on the art of caricature, five satirical plays in Armenian, “Our Seven Deadly Sins”, and an article “How I Came to Egypt.”