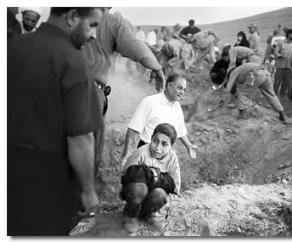 Born in Tehran to Armenian parents, Eric Grigorian left the country with them when he was 9-years old and settled in Los Angeles.

Eric learned photography from his father and borrowed his camera. Since 1994, he has studied photojournalism at San Jose University, as well as in London and elsewhere. Now a freelance photographer for the Polaris photo agency, he uses a Canon and a Leica, and prefers to shoot mostly in black-and-white, but switches to color for special events that he covers for magazines.

In the earthquake photo (23 June 2002, award-winner of the 2002 World Press Photo contest), the child is holding his father's pants, but the viewer can tell the whole family was gone because there was nobody near him. Eric was visiting with family when the earthquake hit, and after he heard about the tragedy and decided to go, it took him about four hours of driving to get to Changooreh village, which is about 300 miles from Tehran.