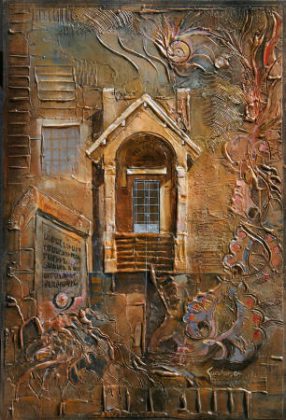 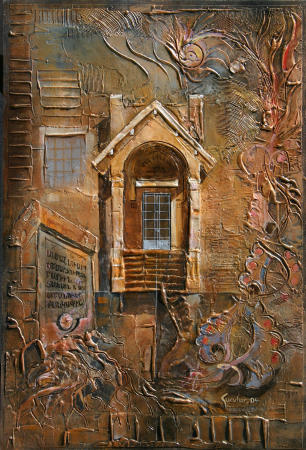 His paintings are very well known to the art-loving public in Cyprus for their distinctiveness and the infinite calmness and tranquility which they project. They seem to originate from the land of dreams as if existing only in the realm of thre world of fantasy.

The works of John Guevherian project a surrealistic dimension, even though the real symbols used, such as ancient sculptures, remnants of historic buildings and amphorae, are clearly visible on the canvas.

Some constructional and cubist elements hint at the duel role of Guevherian, that of the Architect and the Artist.

Guevherian has distinguished himself in his professional domain of architect as well by participating successfully in numerous Pan-Cyprian architectural competitions and winning several first prizes, including the Headquarters of the Cyprus Sports Organisation (KOA) in Nicosia, the “Kition ” covered athletic centre in Larnaca, including the Olympics swimming pool, and a housing project in Kaimakli of the Cyprus Land Development Organisation. His other prizes include the Ministry of Foreign affairs and the Sports Centre in Agros and Limassol.

John Guevherian lives and works in Cyprus and maintains a serious and steady presence in the art world with his solo exhibitions as well as participation in various group exhibitions.