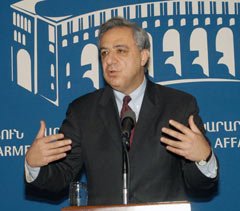 Minister of Foreign Affairs of .

should be rejoicing at the passage of a bill last week by 's National Assembly that would make it a crime to deny the genocide of Armenians by the in the early 20th century.

The message from is clear: So long as refuses to confront its own history, others will feel impelled to do so. If, on the other hand, embarks on the difficult road of acknowledgement and reconciliation, then others will have reason to step aside and let the process take its course.

Instead, we note with dismay that this very strong message is being lost on . It continues to surround itself with myths, evade the past, and thus elude the future.

As we observe the reactions in Turkey, we find it disingenuous for a country that itself doesn't allow free speech and criminalizes even the exploration of certain areas of its own (and therefore our) history to be so indignant over a law that criminalizes the rejection and denial of that same history.

After all, the actual, difficult discourse must evolve in , and not in , or . It is in that a free and open dialogue is deeply needed, and sorely absent. Those who cry “leave history to the historians” have gagged the historians.

At the same time, objects vehemently to the involvement of third countries in a discussion that really must take place between Turks and Armenians.

No one wants such a dialogue more than . Yet has made such give-and-take between our peoples and our states impossible. In addition to the restrictions on speech, our borders remain closed. Nor are there diplomatic relations between our countries.

In other words, there are no opportunities for new experiences, new memories, new interactions to build up alongside the old. Instead, there is a lingering security concern about a neighbor that has not repudiated such state violence.

As continues to corner itself, it handicaps the future of this region and impacts the lives of its people and ours. Worse, those extremists who understand the great risks and costs of tolerance, openness and rapprochement, are emboldened.

We are not the only neighbors in the world who have a troubled relationship. Yet it is exactly because we live right next door that we must be willing and prepared to transcend the past.

France's principled acknowledgement of the 20th century's first genocide offers the hundreds of thousands of French Armenians, all descended from genocide survivors, the dignity that they have been denied because of the Turkish government's continuing insistence that the atrocities they lived through are unproven myths.

There is no doubt that if the word “genocide” had existed in 1915, every one of the hundreds of articles in newspapers around the world would have used it. Look how frequently the word is used today to describe events and cases where the scale and depth of the carnage are even smaller.

When a government plans to do away with its own population to solve a political problem, that's genocide. The ambassador to from 1913 to 1916, Henry Morgenthau Sr., called what he witnessed the “Murder of a Nation.” Others called it “race murder.” They did so because the term genocide did not exist yet.

Those who deposed the Ottoman rulers – the early leaders of modern , including Kemal Ataturk – actually court-martialed those who instigated these crimes. Today's , which has inherited the nationalism of its founders but not their memory, spends untold amounts to convince the world they didn't happen.

Not just money. Today, their continued insistence on rejecting and rewriting history costs them credibility and time. Today's Turks do not bear the guilt of the perpetrators, unless they choose to defend and identify with them.

has no preconditions for establishing diplomatic relations. Nor is opposed to 's membership in the EU. We'd like to see meet all European standards. We'd like to see become an EU member so that our borders will be open and we can cooperate to build a secure, prosperous region.

We can only assume that Europe will expect that a which is serious about EU membership will come to terms with its past. A few in Turkish society have begun that difficult process of introspection and study. We can only welcome this process.

It is essential that the international community does not bend the rules, does not turn a blind eye, does not lower its standards, but instead consistently extends its hand, its example, its own history of transcending, in order for Armenians and Turks, Europeans all, to move on to making new history.