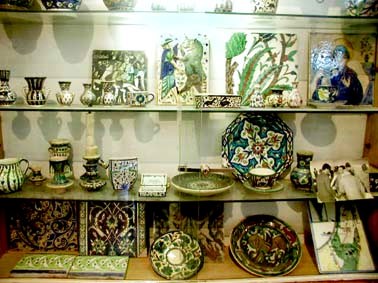 The Armenian Ceramics of Old

Azad-Hye, , 20 October 2006: The Balian Family of Jerusalem has been producing exclusive hand painted ceramic tiles and pottery since 1922. This makes them the oldest business in existence in .

The business is currently operated by Neshan Balian Jr., whose grandfather Neshan Balian, a master potter, came to in 1917 from . He was brought by the British government to renovate the ceramic tiles of The Dome of the Rock.

We contacted Mr. Neshan Balian Jr. and asked him the following questions:

– What is remarkable in the Balian pottery and why do you call yourself ?Ceramics of Palestine??

There are quite a few so called Armenian ceramics artists in nowadays. Apart from the Karakashians, they all started about 10-15 years ago when the word “Armenian Ceramics” started to become a common term in the tourist and designer market in Israel/Palestine.

I think the most remarkable aspect about Balian pottery is that we produce all of our pottery ourselves. We do this from scratch; meaning we import the plastic clay from and then form it ourselves on the wheel (or press it on special ceramic presses for items such as plates, trays etc) and fire it for the first stage which is called the “biscuit” stage. At this stage the pottery is white and porous and the girls hand-paint the pottery which is then re-fired with a coating of glaze to give the final glossy product. No other so called “Armenian Pottery” studios in produces their own biscuit pottery. They all buy it from the potters which produce the imitation mass produced Armenian pottery in the souk and then paint those pieces and fire them in their small kilns. How can you call yourself a potter or a ceramist when you are not producing your own original pieces and just painting on ready made objects?

The reason the place is called Palestinian Pottery is that when the studio was established by my grandfather Neshan Balian and Mr. Karakashian senior in 1922, it was called Palestine Pottery. When the Balians and Karakashians separated, my father changed the name from ?? to ?Palestinian?. We did not change the name when the Jordanians came in 1967 to Jordanian pottery and did not change it to Israeli Pottery when the Israelis came. At the end of the day, we are Palestinians of Armenian roots so we have to respect the community that opened their arms and took us in during the Genocide. That was the Palestinian Arab community. That is also why we have two websites where we do most of our work now. One is the www.palestinianpottery.com and the other is the www.armenianceramics.com ?website. We are proud of both of our heritages.

– How can somebody recognize the Balian pottery? Do you have any sign on your products?

We have distinctive inscriptions behind all of our pottery. The name ?? is written in English and – given space considerations – either the letter ?B? (in Armenian) or a full ?Balian? (in Armenian) is written under each piece.

– Is there any Balian ceramic piece of art used in a world-known monument, apart from the Dome of the Rock in ?

I can mention a beautiful meditation center in , a church in , ? ? in and hundreds of other installations in hotels, palaces, residential villas, swimming pools, fountains etc.

– What is remarkable in Armenian pottery (color, form, design?etc)?

I think the question should be what is remarkable about ?The Armenian Pottery of Jerusalem? rather than Armenian pottery. Armenian pottery is an identity of rather than that of or anywhere else. Sure my grandfather came from Kutahya and that 70% of the artists there were of Armenian roots but the whole industry was known as Turkish or Kutahya Pottery. It is only in that this art truly took its own identity and this was true the hard work of such people as the Ohanessian, Karakashian and least but not last the Balian family. I know you are going to think I am being biased over here, but what truly gave Armenian Pottery its true identity was the unique artistic 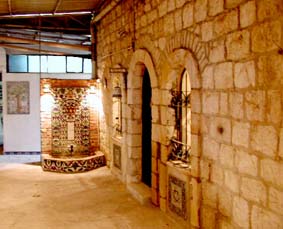 influence of my mother Marie Balian. She gave new life to the designs which my grandfather and Mr. Karakashian Sr. were reproducing from the Kutahya influence. With her French Beaux art training and talent she introduced gazelles, birds and the animals which were never an important part of the Kutahya repertoire. Her loose and free floral curves and patterns is what started attracting Israeli artists and journalists to the factory, and slowly some of them started realizing that this really is a unique form of art very different form anything else and with its own identity. Once articles started being written, books about us being printed and museums exhibitions opening then the ?Armenian Ceramics of Jerusalem? term was coined. Once the fame started, then a lot of young people around the Armenian convent started to take advantage of this fame by setting up small studios and using the Armenian Ceramics name. Some were talented and evolved their different styles but most just copied our work.?

– What are your future plans and goals?

There are two choices you can make; either stay small as a two person studio as most others or expand to become a much larger operation. I have chosen the latter and have studios in , and yes . We are soon going to open in and a new one in proper. We are second to none in terms of technical and artistic knowledge and I am applying both to come up with new products and ideas to make our work fresh and appealing to a wider range of an audience. We sell mostly to the through our unique websites. We are slowly moving to the Gulf countries to take advantage of the huge markets there.

Before the arrival of Neshan Balian to , the production of decorative ceramic tiles and pottery in this region did not exist at all. Balian with his partners the Karakashians established this unique form of world famous art known presently as the ?Armenian Pottery of Jerusalem?.

1965 saw the amicable end of partnership between the Balian and the Karakashian families with the Balian family remaining on the present premises and continuing the tradition of this unique form of pottery. 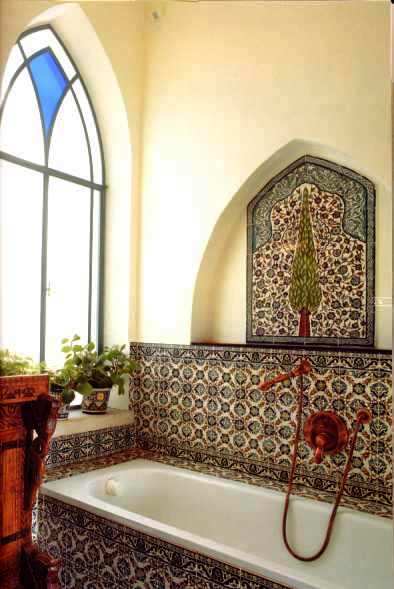 The factory was destroyed totally in the 1967 Arab-Israeli war except for the huge dome furnace with a full load of fired ceramics which was sold and helped in the reconstruction. Lack of raw materials in the early 30s and 40s was also a problem with homemade solutions of breaking bottle glass and crushing it as ways to prepare badly needed glazes, but eventually Neshan Balian and his son Setrak overcame these problems and the factory started to prosper.

Setrak Balian took over the Armenian ceramics factory in 1965 after the death of his father. He studied ceramics in under Bernard Leach and then came back to in the early 50's and established a ceramic brick and roof tile factory in .

Setrak?s wife Marie Balian, who is of French Armenian heritage, is a world renowned ceramic tile artist. Her ceramic tile murals have been exhibited all over the world including a solo one in 1992 at The Smithsonian Museum in She had a huge influence in creating and giving the ?Armenian Ceramics of Jerusalem? its unique identity.

Since 1996, Neshan Balian Jr. has been managing the factory after the passing away of his father, Setrak. He holds both a mechanical and ceramic engineering degrees from and in .

Original and authentic Balian Armenian Ceramics are only sold in their factory and retail outlet on as well as on their website. The present location of the factory is where the true form of art known as ?Armenian Ceramics of Jerusalem? was born.

The tiles and pottery of Balian Armenian ceramics have been exhibited all over the world in various museums and institutions. Their pottery has also been the subject of numerous articles in magazines and newspapers worldwide.

2- Entrance to the ceramics museum.

3- Sample of a ceramic-made bathroom