Reflects a fresh example of transparency and community commitment

The Armenian General Benevolent Union (AGBU) Egypt launched on 13 June 2007 a rich in content website, one of the best in the Middle East Armenian reality, which covers the past and present of the organization in Egypt (established 1906), with a commitment to provide the readers with updates on various subjects, events and activities in the community.

For the time being the website is in English language only, although we think that the Armenian and Arabic versions are important and should be definitely added in any future development.

Some of the titles and subtitles of the website include:

The photo gallery is very impressive covering a period of half centry (since 1955).

The Archives have a collection of selective news and community highlights from 1955 up to the present days.

The Communiques section is interesting because it has one of the rare examples where minutes of Armenian meetings are made public (usually these minutes are kept in the drawer). Example is given here:

AGBU Cairo held its Ordinary General Assembly on Wednesday 18th April 2007 at its headquarters in Heliopolis.

After approval of the previous General Assembly minutes, Mr. Mardig Balayan, the general secretary of the board, made a presentation of the 2006 activities report of AGBU Cairo. The financial report and the accountant?s report of 2006 were then approved by the Assembly, followed by the approval of the budget of 2007. Mr. Garo Neredian was also approved as the Union?s accountant for 2007.

Messrs.  Mardig Balayan, Chris Michalian and Dr. Viken Djizmedjian were the ones to become members of the next mandate of the AGBU Cairo board without elections, as Mr. Berdj Terzian withdrew his candidature. He became honorary chairman of the union as recommended by the Assembly.

Mr. Berdj Terzian made a presentation to the Assembly on the plans of AGBU Cairo to purchase a building or a land for the erection of a building, and this to improve the Union?s current and future services, the Assembly delegated the board to follow up on this matter. 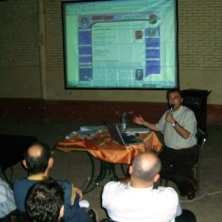 A brief presentation of the website?s idea, concept and purpose was made by AGBU Cairo chairman, Dr. Viken Djizmedjian, followed by an online projection of the site on a large screen. He explained the importance of the site in creating a much needed information outlet about the past and present activities of AGBU Egypt and HMEM Nubar clubs.

He also added that the website would be of special interest to former and current Egyptian Armenians wishing to check on past and present events organized by the two institutions. It could also be of interest to other individuals wishing to be informed on the services provided by AGBU Egypt and HMEM Nubar clubs of Cairo and Alexandria to the local Armenian community members.

Photo: Brief presentation by Dr. Viken Djizmedjian, Chairman of AGBU Cairo, about the content of the website.