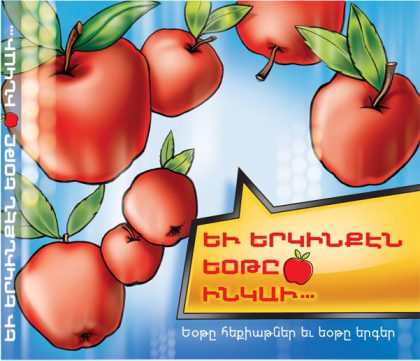 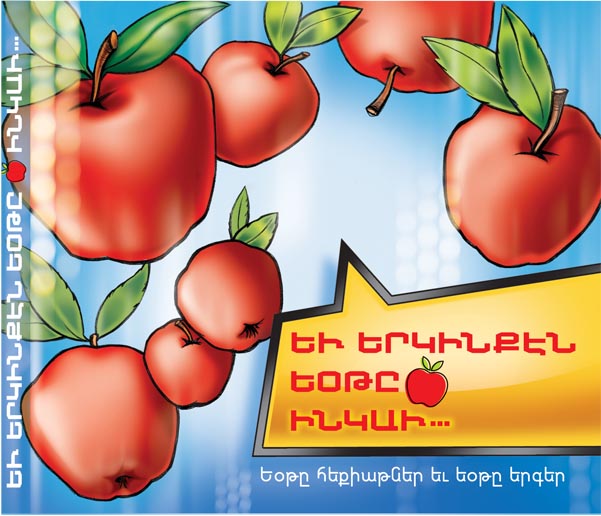 A CD of seven stories and seven songs

This is the title of a CD with seven Armenian stories (told in Western Armenian) for children between the ages of 5 to 12. Each story has a song and inside the package there?s also a booklet, where you can find the song lyrics and the story characters in black and white, so the child could color them.

The CD was released in December 2011 in Aleppo, Syria.

Azad-Hye interviewed Nanor Mikayelian, one of the persons behind the project (and the singer of the seven songs):

The title is so eye-catching. How did you choose it?

The package as a whole is eye-catching I?d say. It?s supposed to grab children?s attention and then win their hearts. As for the title, you know, at the end of any Armenian story, the storyteller says ?And three apples fell down from the sky; one for me, one for you and one for the one who got the moral of the story?. Since we included seven stories in this CD, we decided to keep the number seven going.

Why did you decide to tell your stories in an audio form?

Well, first of all, only a small percentage of our children nowadays read Armenian books. We also lack libraries, radio stations and puppet shows for Armenian children in the Diaspora; this was the easiest way to reach to as many kids as possible. We wanted the children to know about Noah?s Ark, to learn about our history and to get to know Hovhannes Toumanyan and other Armenian authors.

This is only the beginning though; we are planning on releasing a new collection every year.

How many people were involved in making the CD? And why did you decide to combine songs with the stories?

Not too many. Yeran Zeytountsian and I selected the stories and she read them because she is an Armenian language teacher and an actress, so she knew how well to tell the stories. I chose seven songs that would fit those stories, a way to complete the idea and the mood and to keep the child interested. Many Armenian households around the world do not have the means to expose their kids to the Armenian art of singing. So we seized the opportunity to introduce some of our best composers and their songs.

I sang all seven of them and my husband Garo Keklikian arranged the songs and added the sound effects and composed melodies to go with every single story. It was a daunting job but very pleasant and amusing. His favorite is “The Dog and the Cat” (Շունն ու կատուն), because he composed the whole background melody from scratch. Vartkes Barsoumian drew the characters in his own unique way. Sometimes he would draw tens of sketches before choosing his favorite one to be included in the booklet. Last but not least, the one and only Ardo Hampartsumian designed the CD and the booklet with his artistic mind and magical hands. He knew how to please the biggest critics in town, i.e. the children.

I couldn?t have asked for a better team for this CD, everyone worked from their heart. All stories and songs were recorded in Garo Keklikian?s studio KeghArt in Aleppo.

Where did you distribute the CD?s?

The first thing we did was to go to the Armenian school principals with the first copy. They all liked the idea so much and almost everyone decided to buy it and give it to the school children as a New Year present.

Here I?d like to thank His Grace Bishop Shahan Sarkissian, Prelate of the Diocese of Aleppo, who welcomed the idea and bought 500 copies to donate them to the students of Armenian schools in Aleppo.

You have worked so hard for so long, yet we noticed that you are selling the CD?s for not a high price, why is that?

Well, our primary goal was to benefit the Armenian child in the Diaspora. The money we earn from selling at such an affordable price will cover our expenses like the CD duplication, the printing office expenses? Believe it or not, we are content; the feedback we got so far from kids, their parents and teachers is priceless.

What stories and songs did you include?

1) The complete story of “The Dog and the Cat”, narrated by Yeran Zeytountsian.

If you have any questions or you would like to purchase a copy of the CD please write to Nanor Mikayelian at this email.