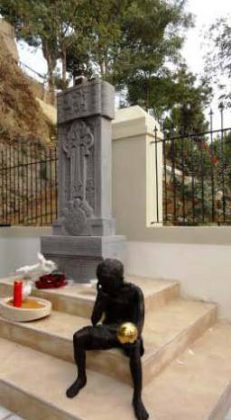 Five years ago Maurice Missak Kelechian discovered a mass grave in Antoura (Lebanon) in the location of an old Turkish orphanage, in the premises of St. Joseph Antoura French College.


On 22 September 2010 a Stone-Cross (Khachkar) and a bronze statue was inaugurated in the Antoura College cemetery in memory of the orphans who were buried there.

Kelechian made the following inauguration speech:

My Journey Of Love

My journey of love started in 2005 with a single photo in Stanley Kerr?s book, “Lions of Marach” that showed a group picture of Jemal Pasha with a footnote that read: “Jemal Pasha commander of the Turkish Fourth Army together with Halide Edib, on the steps of French College at Antoura, Lebanon.”

My passion for the Armenian modern history had just started to take off and finding a piece of that history in my own backyard was surreal! Little did I know that I was embarking on an incredible untold story.

I jumped into my car eager to identify the location of the orphanage shown in the picture. Antoura, for many Lebanese families, is a beautiful place to take their kids for a drive and some fresh air. They had no idea that soon, it was going to take their breath away!

Apprehensive at first and then excited, I approached the French college. Careful not to disturb what I didn?t know, I started taking pictures of the college from afar and as I came closer to the building, my story started to unfold.

The college was established by the Jesuits brotherhood in 1656. Lazarist priesthood took over the college in 1834 and when the WWI broke out, the Ottoman Turks confiscated the college, dismissed all the priests and converted the building into a Turkish orphanage. Between 1915-1918, 1200 young orphans were kept in Antoura of whom 1000 were Armenians and the remaining 200 consisted of Turks and Kurds.

In 1916, Jamal Pasha visited Antoura together with 40 elite Turkish teachers, headed by Halide Edib, the new director of the college; prepared to teach the orphans the ?Ottoman Turkish culture?; hence the photo in Kerr?s book.

I finally took the courage to enter the college. Pretty soon, I was guided to see the college?s archivist, Mr. Sebastian Arhan, who welcomed my curiosity and very gracefully supported my pursuit. As we started walking around the college trying to trace the location of the photo, an employee of the college, Mr. Doumit Hayfa, told us that in 1993, the remains (bones) of some of the young orphans were found and were collectively buried under an unmarked mass grave next to high ranking Lazarist priests.

In 2006, when my initial findings about the Antoura orphanage were published in Aztak, an Armenian newspaper in Lebanon, I found out that Mr. Karnig Panian, previously the deputy dean of Jemaran high school in Beirut, was one of the survivors of the Antoura orphanage.  In 1992, he had published his experiences as an orphan in a two-volume memoir.


I stayed up all night reading the memoirs in owe and disbelief!  While the Antoura building looked like an orphanage on the outside, on the inside, the young orphans were going through a systematic Turkification executed through most heinous tactics; changing the Armenian names of the orphans into Turkish names, luring the orphans into believing that the Turkish culture is a better culture than the Armenian, and, gradually, if the orphans spoke, prayed or sung in Armenian, punishing them by falakha (Hitting of the soles of the feet with iron rods).  ?The sessions of falakha usually ended up with bleeding kids sent to the infirmary to be treated for fractured bones.?

In Halide Edib?s own words: ?One felt that these children, whatever happened, would carry something crippled, something mutilated in them.?

I was appalled and revolted by the realization that the Genocide did not stop with the killings, the drowning, the burning and the rapes, it rather continued to crawl beyond the deserts, the rivers and the caves; the final frontier of the Genocide aimed at annihilating the memory of what constituted ?Armenian culture.?

Here, I would like to add that according to the UN definition of Genocide, the 5th point specifically stipulates that “Forcibly transferring children of a group to another group” is an act of Genocide (Article II of the 1951 UN Convention on the Prevention and Punishment of the Crime of Genocide).

From that day on, I was haunted by the souls of these orphans 300 of whom lost their lives between 1915-1918 as a result of abuse, famine and illness. In his memoires, Mr. Panian wrote: ?The available hospitals were merely a sleeping hall.  There were no skilled doctors to provide the proper medication. The dead orphans, who were buried in a hole and covered with dirt, were attacked, the same night, by the hungry jackals, ripping off the little bodies and scattering their bones all over the place.? ?The only thought on the orphans? minds was food.  In desperation, they would often collect the bones of their dead friends, grind them and use them in soups as food to survive.?

Later, when I returned to Antoura and I watched the college through the eyes of a 6 year old Karnig who experienced the pain of abandonment, famine and Turkification and who saw his friends lose their identity and vanish to be forever forgotten.  As I sat on the mass grave bewildered, I promised to tell the story of the unsung heroes until they were truly laid in peace.

Towards the end of 1918, Halide Edib asked Dr. Bliss, then the dean of American University of Beirut, to take Antoura under the protection of the American Red Cross.

I expressed my gratitude to the Near East Relief and Red Cross organizations and several official representatives of foreign governments for actively taking part in saving Armenian lives and selflessly caring for over 130,000 Armenian orphans.

I did tell the story of my heroes to Armenian communities in Lebanon, Syria and United States through presentations, TV, Radio and digital media interviews.

I did tell the story of the young orphans to thousands of high-school kids through film footages, researched data and archived photos.  These students now recognize the face of the Genocide and are able to relay to the pain of the stories told to them by their parents and grandparents.


On March 7, 2010, Together with Mr. Robert Fisk, the internationally renowned Middle East Correspondent for ?The Independent? newspaper in London, I revisited the Antoura mass grave. He then went on to write and publish a powerful article under the title of ?Living Proof of the Armenian Genocide? that covered the story of my heroes which was translated into several languages and replicated by the thousands on web pages all over the world.

Even Turkish writers and journalists who heard the story of the young orphans visited Antoura and the mass grave.

Five years ago, I pleaded to the Armenian community and its leaders to initiate a memorial to mark the grave of the forgotten heroes.

Fortunately, Mr. Harut Khatchadourian immediately responded to my pleas with utmost humility and generosity.  He understood the urgency of the work that needed to be done and gave me the Green light to do whatever was deemed necessary to pay the respect due to the orphans.

KOHAR Symphony Orchestra & Choir generously funded the creation of the Khatchkar by Zaven Koshtoyan, a symbol of the Armenian culture, as well as the bronze sculpture of a young boy holding the globe by Raffi Tokatlian, symbolizing the young ambassador to the world to raise awareness to protect and treat orphans around the world with passion, compassion and utter respect.

To top it all, KOHAR made sure its symphony and choir is present here today to give the orphans a true Armenian burial blessed with their angelic voices and the beauty of the Armenian hymns.

Today?s memorial would not have been possible without the patience and the understanding of Father Antoine Nakad, the Superior of the Antoura College. He became my angel throughout the unfolding of the story and the preparation of the grounds.

Today?s memorial will make the world aware of the impact of the irreversible pain and suffering inflicted by human beings onto others.  It will also tell the world that it is impossible for the Armenian people to heal and go on living with their heads held high when their colossal losses are categorically denied by the Turkish government.

Today?s memorial will also remind us, the Armenians to respect those Turks who risked their lives to save Armenian families during the Genocide and who, today, risk their lives by openly apologizing on behalf of their old and new governments.

The flowers that I will place on the mass grave of the orphans today will be in memoriam of all the Antoura orphans; Armenians, Turks and Kurds.
I am grateful for the perfect conclusion of my journey of love and I am deeply honored for the trust vested in me to help my heroes to finally rest in peace.

Thank you for your presence.


Details of the statue:

Newer PostOrphans of the Genocide: a documentary film by Bared Maronian
Older PostBishop Shahan Sarkissian participates in the Middle East Synod in Vatican