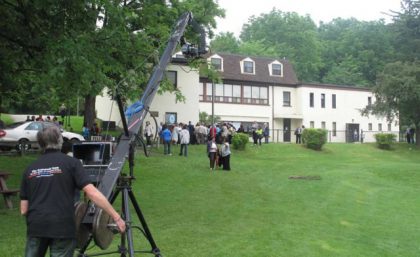 ?Orphans of the Genocide? is an 18 minute documentary produced by the Armenoid Team about the untold story of over 130,000 Armenian children left parentless as a direct result of the Armenian Genocide perpetrated by the Ottoman Empire during WWI. These orphans were saved and documented by the United States Congress commissioned, Near East Relief organization.


On October 18, 2010 The Suncoast Chapter of the National Academy of Television Arts and Sciences nominates the seven minute version of “Orphans of the Genocide? for an Emmy Award in the category of Historical Documentary.

?Our Emmy nomination is great news, it will generate more confidence in our next phase of production?, says Bedo Der-Bedrossian, one of the producers of ?Orphans of the Genocide?. Currently, the Armenoid Team is working on expanding this 18 minute documentary to a one hour film. ?We have interviewed orphans and their families and have lined up a number of experts and scholars in this field for interviews?, adds co-producer Paul Andonian.

For the production of the one hour version, The Armenoid Team has widened its scope of research and coverage beyond United States and has explored the international arena for fact finding missions. In Canada the team documented and filmed the designation ceremony of the ?Georgetown Boys? farmhouse into a historical sight in Ontario, Canada this past June. ?Georgetown Boys? is a group of Armenian orphans brought to Canada in
early Twenties and given shelter. ?We just returned from filming three crucial locales in the Middle East where Armenian genocide orphans were housed. One of them is the Antoura Orphanage where 1,000 armenian orphans were being turkified under direct orders from the commander of the 4th Ottoman Army, Jemal Pasha, who appointed Halide Edib Adivar, the most prominent feminist of the Ottoman Empire as the directress of this turkification center ?, concludes the director of the documentary and founder of the Armenoid Team, Bared Maronian.

The Armenoid Team in colaboration with Blue Planet Productions of Toronto, Ontario, Canada successfully filmed the designation ceremony of the George town Boys Farmhouse at the Cedarvale Community Centre in Ontario Canada on June 26, 2010. This filming will be an integral part of “Orphans of the Genocide” 1 hour version documentary telling the stories of Armenian orphans from around the world. From Jerusalem to Ethiopia, Armenian ancestral lands to Europe and Australia.