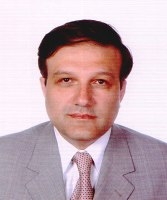 On 20 August 2009, Armen Melkonian, the newly appointed Ambassador of Armenia to Egypt presented the copies of his credentials to Ahmed Aboul Gheit, Foreign Minister of the Arab Republic of Egypt.

In the course of the talks that followed the ceremony, Minister Aboul Gheit congratulated Ambassador Melkonian on his appointment and expressed hope that the new Armenian Ambassador will have his personal contribution to the development and deepening of the Armenian – Egyptian relations.

The Egyptian Prime Minister highly appreciated the existing bilateral cooperation between the two countries and attached importance to the continuation of high-level dialogue. He emphasized the important role of the Egyptian Armenian community both in the internal life of Egypt and in the strengthening of Armenian-Egyptian relations.

On Aboul Gheit?s request Ambassador Melkonian presented the recent developments in the negotiations of Artsakh (Karabakh) issue, as well as the current state of the Armenian – Turkish normalization process.

Ambassador Melkonian started his diplomatic career in 1994. His assignments abroad included three years as the Counselor of the Armenian Embassy in Cairo from 1994 to 1997, followed by a term as the Consul General of the Republic of Armenia in Los Angeles (1998 – 2000) and Consul General in Aleppo (2002 – 2006).

He is the author of several articles on Armenian – Arabic historical and cultural relations. He graduated from the Yerevan State University, Faculty of Oriental Studies in 1980. He received a PhD in History from the National Academy of Sciences of Armenia in 1990.

He was born in 1958 in Yerevan. He is married to Mrs. Yevgenya Melkonian, has a son and a daughter. 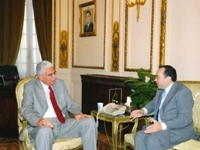 Dr.Rouben Karapetian expressed its deepest gratitude for support and assistance extended to him during his diplomatic mission here in Egypt.

It is by the special decision of  Dr. Nazif that the Center for Armenian Studies was established in Cairo University in 2007.

In his turn Dr. Nazif thanked Ambassador Karapetian for his active and fruitful diplomatic work during the last 5 years, wishing him success and new achievements in his new diplomatic assignment.

Source: Website of the Embassy of Armenia in Cairo
http://www.armembegypt.com/