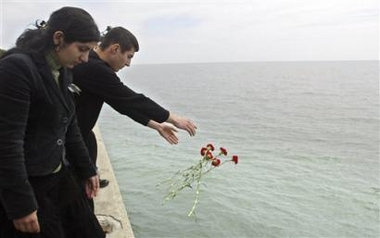 Will tragedy always be our teacher?

The morning hours of 3 May 2006 plunged our country into alarming grief. The news of the tragedy has already spread when starting from 10.00 am all local TV channels suddenly began airing details of the crash as though receiving an order from a common headquarters.

Planes of the best international air carriers also crash due to weather conditions, flight controllers? mistakes, technical failure or the crew?s mistake. No air carrier is safeguarded against this. Neither is Armavia.

A bad trait in our identity – careless attitude towards the others? pain – came out again on May 3, when starting from the noon TV channels aired the names of the perished passengers. The names were also hung at the airport.

No middle names were put in. No one, fortunately, can guarantee that all passengers are dead. No one could be 100 percent sure that Armavia roll was correct. Who can measure the sorrow that numerous citizens went through while approaching the rolls and reading the names of relatives or friends?

Once again we had to learn from our tragedies.

His Holiness Karekin II to Preside at Requiem Service in

On Saturday, May 6, His Holiness Karekin II, Supreme Patriarch and Catholicos of All Armenians, will preside during a Repose of Souls Service in the Saint Gregory the Illuminator Mother Cathedral of .

The requiem service will be offered in memory of the 113 victims of today?s Yerevan-Sochi Armavia flight airliner disaster. The service will commence at 6:00 PM.

His Holiness offered his sympathies and prayers for rest for the souls of those that perished, as well as comfort and consolation for the families and friends of the victims.

His Holiness Aram I, Catholicos of Cilicia expressed his deep condolences in letters sent to the president of Armenia Robert Kotcharian and the Catholicos of All Armenians, His Holiness Karekin II after an airplane belonging to the Armenian Armavia Airlines crashed into the Black Sea in the early morning hours of May 3, killing about 113 passengers and crew members.

On this sad occasion we share your, our motherland?s and our nation?s pain. We ask God to grant heavenly rest to the innocent victims of the crash and to console their relatives with the Holy Spirit,  the Pontiff wrote.

The Catholicos also informed that requiem services will be held this Sunday 7th May 2006 in memory of the victims of the crash in the Mother Cathedral of St. Gregory the Illuminator in Antelias and in all the Dioceses of the Catholicosate of Cilicia.

Special bank accounts are opened to support the families of the perished aboard the flight Yerevan-Flight.

First bodies to be flown home to after plane crash

The first bodies of passengers killed when an Armenian Airbus crashed into the Black Sea were to be flown back to , an airline spokesman said.

All 113 passengers and crew on the flight from the Armenian capital are thought to have died when the Airbus A320 plunged into the sea early Wednesday as it tried to land at , southern , in bad weather.

A total of 53 bodies have so far been fished out of the water and 37 have been identified, including that of an air hostess.

Relatives of the victims overwhelmed the authorities when they began the grim task of identifying their loved ones from photographs taken of the bodies, including that of a child.

Hopes for an orderly process quickly evaporated when relatives rushed all at once to view the photos posted in a hotel.

Two people passed out and doctors attempting to comfort relatives with drinks of water and sedatives ran out of drugs.

“We don't have any more sedatives and we have the whole night ahead of us,” said one nurse.

The repatriation of the bodies of victims already identified was briefly delayed by a shortage of coffins, according to Andrei Agajanov, a spokesman for the Armenian airline Armavia, which owned the ill-fated plane.

“I hope that all the other families can recover the bodies. The important thing is to be able to bury the victims so that there is a place where you can go to cry,” said Arman Davtian, a 20-year-old just returned from where the remains of his brother have been identified.

For another grieving man, his eyes red through crying and fatigue, the search for a brother-in-law continues.

“The victims' bodies are unrecognisable, horribly disfigured. A mother wouldn't know her own son,” the young man said. 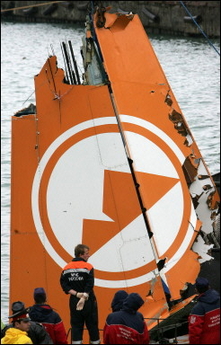 Russian authorities intend to carry out DNA tests on the corpses which cannot be otherwise identified, said Russian Transport Minister Igor Levitin in .

Some people who arrived at airport late Thursday to reclaim their relatives' bodies left again in angry mood after being informed of the delay which meant the plane carrying the victims remains would not arrive until Friday.

Friday 5th May 2006 is a day of national mourning here and in with religious services planned throughout the Armenian diaspora.

The Armenian state will grant 3,300 dollars to victims' families who can expect another 20,000 dollars each in insurance payouts.

Neither the Russian Black Sea fleet nor the Northern Fleet was fully equipped to retrieve the recorders, he said, and appealed for help from foreign countries in raising them from the seabed.


Excerpts from earlier report of AFP

The plane went off the radar screens at 2:15 am, 3rd May 2006, as it attempted a second landing at Adler airport near after heavy rain had reduced visibility, Armenian and Russian officials said.

The pilot had decided to return to after an aborted first landing attempt, but wheeled round again after being informed the rain had cleared.

The airport lies wedged between mountains and the sea and can be tricky to land at even in good conditions, experts said.

“At the last moment, the air traffic controller said would allow the plane to land because the weather had improved,” Andrei Agatzhanov, a senior official with the Armenian airline Armavia, said.

On board the plane were 85 Armenian citizens, 26 Russians, one Georgian and one Ukrainian, according to a list published at airport.

Six children were among the dead, Davdyan said.

Many of the passengers were on family visits. and have declared a day of mourning for the victims on May 5.

In a statement, Airbus said the 150-seat aircraft had been operating for Armavia since February 2004.

's civil aviation agency said that the aircraft was in an “excellent condition” as it had been entirely dismantled, checked and reassembled last month.

Armavia became 's national carrier after the bankruptcy of Armenian Airlines in 2003.

Announcement of the Embassy of Armenia in Abu Dhabi (opening of book of condolences on 5th and 6th May 2006): 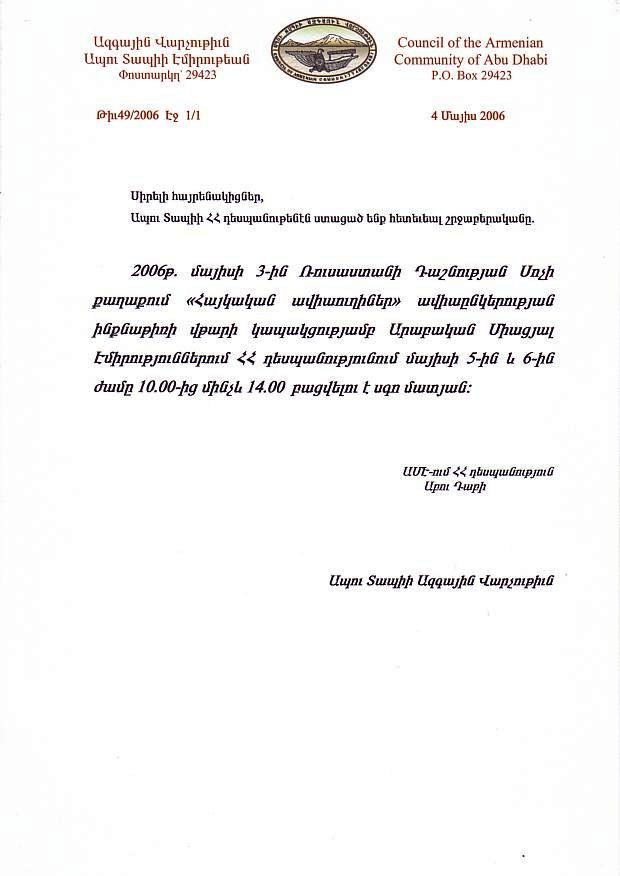 Newer Post'We Remember': by Adrineh Grigorian and her friends
Older PostMekhitarist Library in Vienna gets organized