The US' Middle East allies Bahrain, Kuwait, Oman and Qatar, as well as Malaysia were added today to a Washington blacklist of countries trafficking in people. Algeria and Guinea were the other additions to the blacklist of the State Department's annual 'Trafficking in Persons Report,' which analysed efforts in about 150 countries to combat trafficking for forced labor, prostitution, military service and other purposes.

The seven countries, all of which were on a special watch list last year, join Myanmar, Cuba, Iran, North Korea, Saudi Arabia, Sudan, Syria, Uzbekistan and Venezuela in the dreaded 'Tier 3' list as the worst offenders in human trafficking.

Being on the blacklist, they could face sanctions, including withholding by the United States of non-humanitarian, non-trade related foreign aid. Countries that receive no such foreign assistance would be subject to withholding of funding for participation by government officials in educational and cultural exchange programs.

'Defeating human trafficking is a great moral calling of our day,' Secretary of State Condoleezza Rice said in the report. 'Together with our allies and friends, we will continue our efforts to bring this cruel practice to an end,' she added.

US government research shows 800,000 people are trafficked across national borders, about 80% of them women and girls and up to half of them minors. The majority of victims are females trafficked into commercial sexual exploitation, it said.

Belize, Laos and Zimbabwe were removed from the blacklist this year. Singapore, which had been in the Tier 1 list, was relegated to Tier 2 this year.

Link to the US State Department's report: “Victims of Trafficking and Violence Protection Act of 2000: Trafficking in Persons Report 2007”

TIER 2
Countries whose governments do not fully comply with the TVPA?s minimum standards but are making significant efforts to bring themselves into compliance with those standards

ARMENIA COUNTRY NARRATIVE
ARMENIA (Tier 2 Watch List)
Armenia is a source country and, to a lesser extent, a transit country for women and girls trafficked to the United Arab Emirates and Turkey for the purpose of commercial sexual exploitation.

Armenian men and women are trafficked to Russia for the purpose of forced labor. Women and girls also transit through Moscow to the U.A.E.

The Government of Armenia does not fully comply with the minimum standards for the elimination of trafficking; however, it is making significant efforts to do so. Armenia is placed on Tier 2 Watch List for a third consecutive year because of its failure to show evidence of increasing efforts over the past year, particularly in the areas of fighting trafficking-related corruption and providing victim assistance. Although Armenia increased the use of its anti-trafficking law, increased the number of convicted traffickers serving time in prison, and prosecuted its first labor trafficking case in December 2006 ? marking the first time trafficking victims were awarded financial restitution ? the government failed to make progress in victim identification and referral or in combating official complicity in trafficking.

In the first of two notable cases of official corruption during the reporting period, the government conducted an inadequate investigation of a senior investigator in the Prosecutor General?s anti-trafficking unit, formally concluded that he did nothing wrong, eventually transferred him out of the unit, and demoted him. The second case involved a convicted trafficker who was released from prison temporarily under a provision of Armenian law, allegedly obtained her expired passport from government officials, and then fled the country.

Although the government made limited efforts to locate the trafficker, she remained at large at the conclusion of the reporting period. No government officials were prosecuted for acts related to the trafficker?s escape, although the three top officials of the prison were removed and remain under investigation.

Prosecution
The Armenian government demonstrated moderate improvements in its anti-trafficking law enforcement efforts over the reporting period. Armenia prohibits trafficking in persons for both labor and sexual exploitation through Article 132 of its penal code, which prescribes penalties of 3 to 15 years? imprisonment, which are sufficiently stringent and are commensurate with those prescribed for other grave crimes. In 2006, the government investigated 16 trafficking cases, up from 14 cases in 2005.

Protection
The government demonstrated inadequate efforts to protect trafficking victims in 2006. NGOs provided most victim assistance, rehabilitative counseling, and shelter, although the border guards ran a shortterm victim shelter at the border crossing point with Georgia and referred victims to NGOs. The government provided no financial or in-kind assistance for anti-trafficking NGOs. Armenia failed to implement formal procedures for the identification of victims and their referral to NGOs that provide protection services. Police referred 8 of the 24 victims assisted by NGOs in 2006; this number is down from the number of victims referred in 2005. Victims were not penalized for unlawful acts committed as a direct result of being trafficked. Although victims were not prohibited from filing charges against traffickers, they were not encouraged to participate in investigations and prosecutions. NGOs noted some positive changes in judicial treatment of victims.

Prevention
The government continued to rely on NGOs and international organizations to supplement its own public awareness efforts. The government?s Migration Agency worked with the civil aviation authority and a NGO to publish and distribute leaflets on the dangers of trafficking to people flying to Turkey and the U.A.E. The government also worked
with the Russian Migration Agency to publish and distribute a brochure for laborers traveling to Russia. During the reporting period, a NGO trained 71 border guards to recognize trafficking indicators.

NGOs also held seminars on trafficking for students and teachers in four schools. 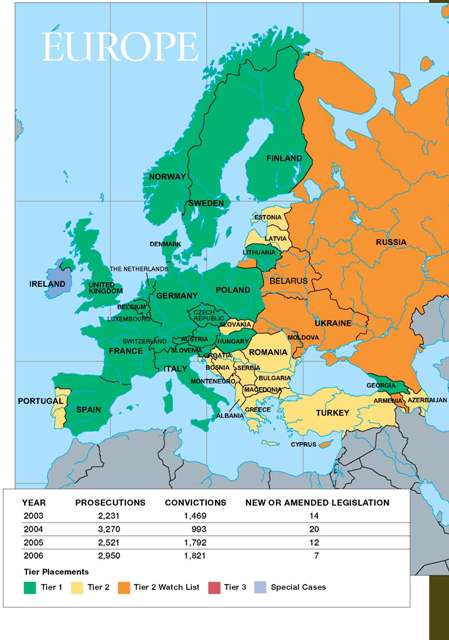