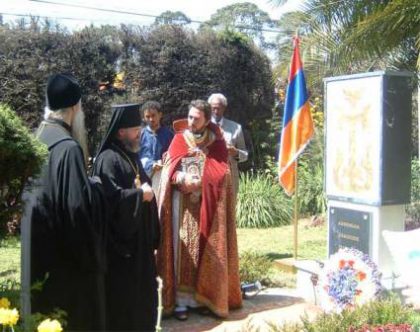 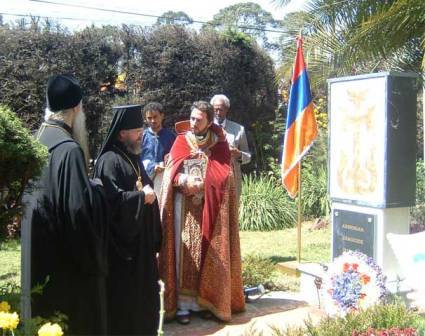 On Sunday 24 December 2006 a prayer for world peace was offered in the Saint George (Kevork) Armenian Church in Addis Ababa with the participation of the Archbishops of the Ethiopian and Greek Orthodox Churches and priests from the Indian-Malabar and Ethiopian Evangelical Churches.
?
In his sermon that followed the Holy Mass celebration, Rev. Father Myron Sarkissian, Pastor of the Armenian Church in Ethiopia, thanked the religious representatives and urged them to work closely for the purpose of establishing dialogue amongst the Orthodox Churches in Ethiopia, as a first step on the way of forming a Pan-Orthodox Church Council, under the chairmanship of the Ethiopian Orthodox Patriarch His Holiness Abouna Paulos. After the sermon, the clergymen read together the peace prayer which was prepared in English by Father Sarkissian.?
?
On 14th January 2007, following the Holy Mass, the Ethiopian Armenians welcomed a group of visiting benefactors, accompanied by Prof. George Bournoutian (Professor of East European and Middle Eastern Studies in Iona College, USA). The visiting guests included: Mr. and Mrs. Dikran Hadjetian (Canadian-Armenians, the benefactors of the Noravank Monastery complex in Armenia), Mr. and Mrs. Haig Titizian (Founder of the Nerses Shnorhali Theological Seminary in New York and long time sponsor) and Mr. and Mrs. Raffi Hovhannesian (member of the Legislative Body in the Eastern Diocese in the USA and a well known philanthropist). During the six day visit the group had the chance to see several historical places in Ethiopia. On 19 January 2007 they were invited to a dinner reception in the Ararad Athletic Club in Addis Ababa, organized by the community Council. During the dinner Father Myron Sarkissian welcomed the benefactors and blessed their work, asking God to increase the number of sponsors and benefactors in the Armenian society. Such people provide excellent examples of church-loving practices. Shoghag Hovhannesian expressed heartfelt thanks on behalf of the guests to all the members of the community and to the Chairman of the Council Vartkes Nalbandian (Deacon). Symbolic gifts were offered to the guests.
?
On 21 January 2007 the Ethiopian Armenians mourned the brutal killing of Hrant Dink, the Editor of “Agos” Armenian daily in Istanbul. In his sermon Rev. Father Myron Sarkissian stressed that “they cannot silent the justice ? there is one more victim today added to the list of the innocent victims of the Armenian Genocide ? 92 years have passed but it seems that the tyrants are not yet satisfied? We believe that the innocent soul of Hrant Dink will be engulfed with light in the eternal Kingdom”.
?
Requiem in memory of Hrant Dink was conducted in front of the Genocide memorial, with the presence of visiting Archbishop Augustin of Lvov and Galich of the Ukrainian Orthodox Church. Archbishop Augustin in his speech underlined the necessity for the worldwide recognition and condemnation of the Armenian Genocide. He pointed out that the crimes committed against the Armenians should be acknowledged by all countries.
?
“The Orthodox churches are established on the martyrdom of Saints and other righteous people”, Father Myron Sarkissian said and mentioned with sorrow the events that took place during Soviet times, when more than 130 Russian Orthodox Archbishops and thousands other priests and monastery members were persecuted. Archbishop Augustin thanked the Armenian community and referred to the close ties the Ukranian Armenians keep with the motherland. “If we have not visited the Armenian Church in Ethiopia today, we certainly would have felt that our mission was not completed,” he concluded.??????????
?
Source: Press release by the Armenian Church Pastorate of Ethiopia, 24 January 2006
?
For additional information please contact Rev. Fr. Myron Sarkissian at:
[email protected]
?
Photo: Archbishop Augustin in front of Armenian Genocide memorial in Addis Ababa, Ethiopia.
?
English text by Azad-Hye