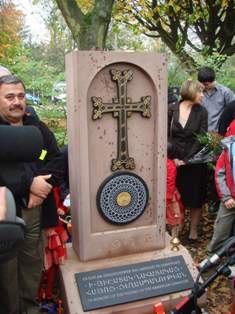 Screaming Turkish protesters fail to disrupt consecration of the Armenian Genocide Monument in Wales
?
At Cardiff, Wales, on 3rd November 2007, the unveiling and consecration of the Welsh National Monument to the Armenian Genocide went ahead successfully despite attempts by screaming Turks to disrupt the Requiem, which was led by Bishop Nathan Hovhannissian and the St. Sarkis Church Choir, London. The monument, the first on public land in the UK, was unveiled by Lord Dafydd Elis-Thomas, Presiding Officer of the National Assembly of Wales and His Excellency Dr Vahe Gabrielyan, Ambassador of the Republic of Armenia to the UK. Wreaths were laid in memory of the Armenian and Assyrian victims of the 1915 Genocide.
?
The event was followed by an afternoon of speeches and Welsh and Armenian music, poetry and dancing. Permission to erect the beautiful Stone Cross monument, a veritable Armenian Khatchkar, was granted by the United Nations Association Wales on land owned by the National Assembly of Wales. The small Welsh-Armenian community, under the leadership of John Torosyan (Wales-Armenia Solidarity chairman), were responsible for all the arrangements to achieve the realisation of this project. The event organising team comprised of members of the ever-growing lobbying coalition initiated by Armenia Solidarity, British-Armenian All-Party Parliamentary Group and Nor Serount Cultural Association.
?
The Assyrian Bishop, Khoshaba Guorges from the Ancient Churches of the East, also prayed and addressed the meeting. His participation was in recognition by Armenians of the hundreds of thousands of Assyrians also killed in the 1915 Genocide.
?
Speeches were delivered by His Excellency Ambassador Gabrielyan, as well as Canon Patrick Thomas and Mike Joseph.
?
Music was provided by the Welsh choirs Cor Aelwyd Hamdden and Cor Cochion. The Akhtamar Dance group provided Armenian folk dancing, directed by Arsen Zakaryan, and a solo dance performance by Dalila Heath. This was followed by a Duduk performance of ?Dleyaman?, performed by Karapet Baljian and Ara Petrossian. Finally, Armenian poetry was recited by Teni Nersessian.
?
At the end of the afternoon the plight of the Armenians of Iraq was highlighted by Isobel Manook. An appeal was made for Iraqi and other interested Armenians to contact Armenia Solidarity ([email protected]) to co-ordinate lobbying efforts on their behalf.
?
The Presiding Officer's speech was read by the MC, The director of the Welsh Centre for International Affairs, Stephen Thomas (please see the transcript of the speech below).
?
Source: Wales-Armenia Solidarity Press Release 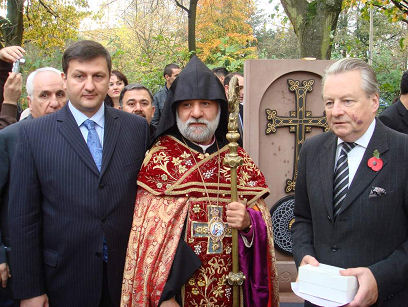 ADDITIONAL READING
?
Speech by the Presiding Officer of the National Assembly of Wales (Lord Dafydd Elis-Thomas) given at the unveiling of the Welsh National Monument to the Armenian Genocide (3rd November 2007):?
?
It is a great honour to be here today at the invitation of “Wales-Armenia Solidarity” to receive this stone cross, the khatchkar, on behalf of the people of Wales, and to see the cross being consecrated in memory of the Armenians who were killed during one of the worst Genocides ever seen in the world; the genocide of a million and a half of the people of Armenia by the Turkish State in 1915.
?
It is a great pleasure also to welcome to Wales the Ambassador of Armenia to the UK, Dr Vahe Gabrielyan, as well as Bishop Nathan Hovhannissian, the Primate of the Armenian Apostolic Church in the UK.
?
It is a reflection of the consuming interest in Wales in the history of Armenia that the finance for this beautiful monument was raised wholly by Welsh Armenians. It is a symbol of the special sympathy of the people of Wales for the people of Armenia that here, in the building raised in order to promote peace throughout the world after the horrors of the First World War, that the cross is placed.
?
This building is a symbol of the wish and the ambition of Wales to have a voice in international affairs and I am pleased to say that Wales has recognised the right of Armenia to her freedom and has called on the rest of the world to recognise the suffering of her people.
?
It is not just a matter of sentiment that Wales identifies with a small country with a unique language, a religious character which derives from the world's oldest Christian Church; and experience of living next to a rabid and imperialistic neighbour.
?
The relationship of Wales with one of the world's oldest countries and the world's oldest Christian Church? back to the end of the nineteenth century and the massacre of the people of Armenia in 1894 in Sasoon.
?
Llewelyn Williams, the Liberal MP from Wales, wrote a book “Armenia Past and Present” on the shame of the massacre.
?
Protest meetings were held, poems were written, and money was collected to ease the suffering, and a “Wales-Armenia Society” was formed.

When the terrible Genocide happened, of course, we were in the middle of the Great War, and to our shame, not the same attention was paid to the sufferings of Armenia in 1915 as was the case in 1894-96.
?
In the wake of Turkey's victory over the allies in Galipoli in 1915, the Turkish state began the work of trying to exterminate the whole Armenian population of the country. On the 24th April 1915, the intellectuals were arrested and murdered and the wider Armenian population then suffered the same fate.
?
As Robert Fisk noted in his powerful book, “The Great War for Civilization“, this was the first ever genocide and it is significant that it was the silence of the rest of the world in the face of such a tragedy that led the Nazis to consider the Genocide of the Jews. Hitler was quoted in August 1939, when ordering his generals to attack Poland, ?who today remembers the destruction of the Armenians??
?
I am glad that people are not turning their back on Armenia today as they did a century ago.
? 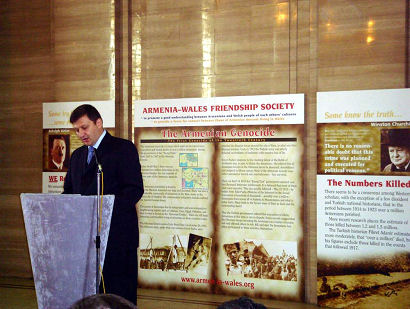 The National Assembly has given true support to the campaign to recognise the reality of the Genocide.
?
In October 2002, the majority of National Assembly Members supported a motion by Rhodri Glyn Thomas A.M. (the present Transport minister) to this effect: –

– Recognising the truth of the Genocide that occurred under the government of Turkey in 1915
?
– Calling on Turkey to end her economic blockade on Armenia
?
– Call on The UK Parliament not to support Turkey's application for EU membership until she recognises the Genocide of 1915 as well as ending her economic blockade of Armenia
?
The majority of Welsh MPs have also signed similar motions in the House of Commons in 2006 and 2007.
?
In 2001, the First Minister of Wales laid a wreath of flowers to remember the victims of the Genocide and in the National Holocaust Day ceremony this year in Cardiff. The Armenians were remembered as well as the Jews and the Darfuris.
?
So this occasion is not only a way of remembering the million and a half that lost their lives in the Genocide, but also an opportunity for us to redress in a small way, because the rest of the world failed to intervene.