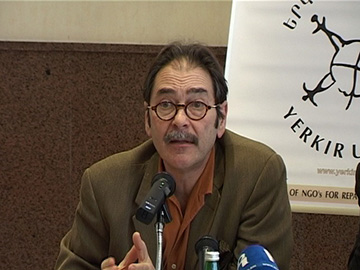 Cengiz Aktar, Turkish Political sciences professor and columnist of Taraf newspapers considers the Armenian genocide as the mother of all taboos in Turkey.

“As long as it is not talked about, not known, not understood, not settled, its curse will continue to remain with us”, Aktar states, arguing that the centenary of the Armenian Genocide is a historical opportunity to break this taboo and to embark on a kind of collective healing.

The issue of the justice for the descendants of the victims of the Genocide plays an important role in this aspect, Aktar says. “There are two sides to this issue; actions the individuals can take and those the state can take”, he explains.

Aktar finds that the Turkish society knows very little about the genocide, but it is willing and enthusiastic to learn more.

Can society be involved in this process? Although there have been some steps in this direction, but they are considered to be small. There are no major initiatives.

This of course has created a logical reaction on the side of the Armenians, who wonder how long they will be waiting.

Aktar sees that there are certain ways to accelerate the pace of the recognition process, but, he admits “there is a structural specter hanging over this issue. That is the state is the primary perpetrator of the genocide. There is continuity between the state of the Ottoman Empire and the state of the Turkish Republic. Contrary to popular belief, the genocide doesn?t end with the creation of the Republic in 1923. A white genocide, a soft ethnic cleansing has been at work since”.

Based on the above and since the state is the main actor, then it has to accept the crime it committed, in order to move forward with this issue.

Aktar names the three R's in the context of establishing justice: Recognize, Repair, Restitute lands. He finds that the land demands are not realistic in the present context of Turkey, especially that there is geographical overlap between Western Armenia and Northern Kurdistan. Therefore he suggests to put the matter of the lands on the side and to focus on the remaining two R's (Recognition and reparation).

Aktar says that it is possible to compensate the descendants of the victims of the Genocide even if the formal recognition of the Genocide has not been made by Turkey. “The restitution of properties controlled by the government could be a starting point”, he underlines.

Seized churches, monasteries and schools, distributed or used by the military could be returned. “The use of churches as storehouses cannot be accepted anymore”, he says.

The return of such properties is not impossible says Aktar and can be considered as an initial step.

Aktar writes about the necessity of compensating for the financial and moral losses. He brings the example of Germany and the European Jews, reminding that there are many ways of calculations.

There are many things that can be done as part of compensating the Armenians. “Another step which can be taken is the issue of denouncing those responsible for the genocide; who up to now were shamelessly honored. This is the moral aspect of the compensation”, Aktar says.