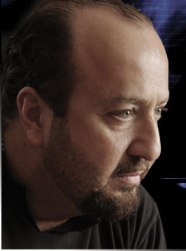 Gassan Rahbani is the nephew (in-law) of the great Lebanese singer Fayrouz. His father is famous lyrical author, composer, orchestra arranger and conductor Elias Rahbani, one of the three Rahbani Brothers.

“We live here” starts with a preface: To the beloved Armenian people, I donate these feelings.

Then comes the Arabic part:

We came from injustice, we came from misery,
We carried on with us our past and we were raised to know about the tragedy.
We knew what martyrdom means and the forgiveness that quenches us.
We walked and arrived here and left behind our songs.
We are going to live here, we are going to die here.
We were created as revolutionaries and free.
O Lebanon stay, we will sacrifice to hold you high.
Blood cheapens for your sake Lebanon.

(choir)
We are going to live here, we are going to die here,
Together we will build up Lebanon.
We love the homeland with our heart and soul,
We are the Armenians and we Are Lebanon.

We are the heart that beats in the center of the city,
We reject humiliation and hate animosity,
They might say many things about us, but whatever they say,
We were born again with this resistant people.

The Armenian part has almost the same words.

It's about the Armenian genocide, the exile, the stablishment of Lebanese-Armenians and Lebanon.

“It is heart warming to see that the real Lebanese are standing up for their fellow citizens. The song is in a We are the world style and is certainly a tune that will be remembered in your head for a while. On the other hand, the fact that such a song is being circulated is worisome, because this may suggest that clouds are gathering over the head of the Armenian community there.  All Armenians around the world should be ready to mobilize in solidarity at a moment's notice”.

He is raised in a family of musicians. His father is famous musician Elias Rahbani.

At the age of 6 he started his classical piano courses under the guidance of his teacher Agop Arslanian, followed by Solfege theory, both traditional and modern harmony, contrepoint, fugue,musical analysis & orchestration.

At the age of 11, he sung along with his brother Jad the famous long playing children's song album composed by their father Elias Rahbani, containing 13 of what became the most famous kids songs in Lebanon such as: Kellon indoun sayarat, Ammy Bou Massoud, etc.

Pioneer of Hard rock in Lebanon and the Middle East. He spent the first 10 years of his career writing and composing this genre. He started his activities at the age of 15 by launching his first album (in English) followed by the second and third at the age of 16 as a solo artist.

At the age of 17 in 1981 he formed “WILD HAZE” along with George Hayek (Guitars & Vocals), Fida Zalloom (bass), Tony Samaha (Drums & Vocals), in the middle of the Lebanese war which has affected a lot his ideas in heavy metal music.

In 1990 the situation in Lebanon pushed him to express his pain, thoughts and ideas in the local Language beside the English singing defending ecology and criticizing authorities, Lebanese and Arab governors.

In 1997 a big turning point in Gassan's artistic career was his first historical musical epic “Hanibal” which he wrote and composed with more than 60 actors on stage directed by Yacoob Shedrawi. This historical epic played around 12 months in Lebanon.

In the year 2000, Gassan played the role of Judas in “And He roses on the third day” musical by Ossama Rahbani, written by Mr . Mansour Rahbani & directed by Marwan Rahbani. 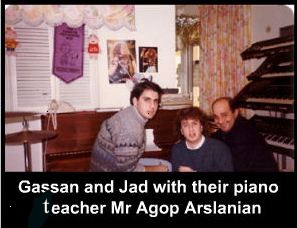 Photos:
1- Child Gassan in the hands of Fayrouz.
2- Gassan Rahbani and his brother Jad with their piano teacher Agop Arslanian.