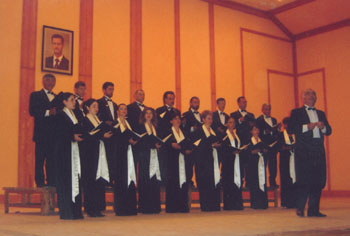 Under the patronage of  H.E. Dr. Riad Nassan Agha, Minister of Culture in Syria and the Higher Institute of Music, in collaboration with the Embassy of Armenia in Damascus, a musical concert was given by the Yerevan Chamber Choir in three Syrian cities: Aleppo, Latakia and Damascus on 20, 22 and 25 October 2007.

The Choir was conducted by Haroutyoun Topikian, one of the eminent Armenian musicians.

Yerevan Chamber Choir has several international participations, such as the music Festival in Ravenna (Italy), the International Festival in Bergen (Norway) and Easter Festival in Moscow (Russia), including joint performances with “La Scala” theatre choir in Italy, conducted by Riccardo Mutti and “Frankfurter Kantorei” choir in Germany. It has received several international awards like the Grande Prix award for choir music competition in Lithuania, and the Best Traditional Album award in Glendale, California.

Note: Elsy Melkonian (25), lives in Syria and works as English language school teacher, reporter and writer in “What's On” Syria. She is also English language lecturer at the Higher Institute of Music and the University of Damascus.