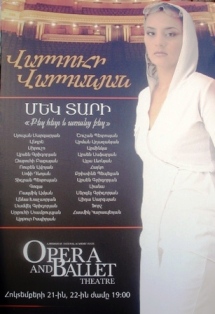 ?
By Carlos Jose Bourdjian
?
Azad-Hye Special
?
Her superior ability to deliver Armenian soul music through the contemporary multi-faceted vocal interpretations is astonishing. She is an exceptional new-generation Armenian jazz and soul vocalist that will definitely amaze anyone with her unique and sophisticated style.
?
A year has passed since the tragic death of Vartuhi Vartanian. Her memory lives among thousands of her music admirers, friends and relatives. Several memorial services have been organized in Yerevan, Los Angeles, Beirut and other cities in memory of “Tutush” (her well known nickname), to keep her image forever cherished in their hearts.?
On 15th October 2007, the exact day of her death, there was a special gathering in her parent?s house attended by friends and relatives, followed with a visit to the cemetery to pay respects. The atmosphere was very heartbreaking. Sorrowful people, carrying flowers and roses were everywhere, and as we say in Armenian “Verke yed patsvetsav” (the wound was reopened). Her pictures – surrounded with candles, flower bouquets and special messages from fans and students ? filled the places unique to her: the State Theater of Song (where she used to teach music) and the premises of her recording company.
?
Her second album was released in spring 2007, with songs in both Russian and English. Two video clips were made from that album, but she was no more with us to see them. The sales benefit of her album will go to a special fund whose beneficiary will be her nine year old son Rupen Avoian.
?
During the past year many awards were granted in her memory. New songs were released and dedicated to Vartuhi, such as ?Mez vochinch chi pajani? (Nothing can tear us apart) by Sirusho, ?Ser nvirel mi kich? (Give some love to all) by Zaruhi Babaian, the duet ?Ur e mer yerorte? (where?s the third of us?) by Arsen Krikorian and Zaruhi Babaian and the special song performed by all her friends together.
? 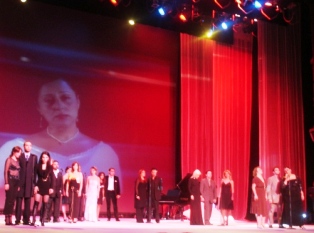 On 21-22 October 2007 two benefit concerts under the name ?Meg dari? Kez hed yev arants kez? (One year? With and without you) took place with the participation of all Armenian pop stars at the Spentiarian?s State Academic Opera and Ballet Theatre of Armenia (see photos). The concerts were well organized similar to last year?s ?Tebi yergink? concert (see Azad-Hye report).
?
Participants were Suzan Markarian, Andre, Sirusho, Arsen Krikorian, Zaruhi Babaian, Roupen Avoian, Sofi Devoian dance ensemble, Dikran Bedrossian, Goga, Razmig Amian, Anna Khatchadrian, Samvel krikorian, Srpouhi Stanboultsian, Arthur Ispirian, Shushan Bedrossian, Arman Aghajanian, Arminka, Arsen Safarian, Alla Levonian, Hayko, Christine Pepelian, Arsen Krikorian (Mrro), Lianna, Sergey Krikorian, Aida Sarkissian, Forsh, Hasmig Garabedian, Arthur Krikorian and Tiv 5.
?
Nazeni Hovanissian and Aved Parseghian hosted the show. They presented every artist in a special way by quoting some words, sentences and nicknames that Vartuhi used to call them. They even read some condolence messages from friends all over the world. Images of Tutush were displayed during the performances besides some touching moments captured from her concerts, video clips and private life. I personally attended the show and saw how people were emotionally charged.
?
The most moving performance was Sirusho?s ?Mez vochinch chi pajani? (see vidoe club on Youtube below). While she was singing on stage the video clip of the same song was being displayed for the first time to the public on a big screen in the background. But the most remarkable was Vartuhi?s son, Roupen, singing a very dynamic song accompanied by a dancing kids show.
? 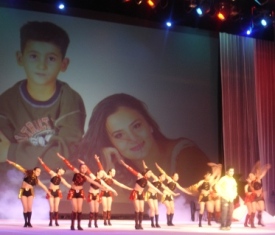 Hayatske mer harnum e tebi ver (We are all looking to up above)
Hima yergni astghern en kez enger (Now that the stars are your friends)
Nrants enk menk asum akh yerani (To them we say how lucky they are)
Vor kez krgen u kez shoyen mer pokharen (To hold and touch you on our behalf)
?
These were the last lines of the special song ?To the memory of Vartuhi Vartanian? at the end of today?s commemorative event: Lyrics by Aved Parseghian, music by Arsen Krikorian, performed by all artists on the stage in a dark environment with no lighting, just few candles and Vartuhi?s photo guarding from a lifted place as if she was watching us from above the sky (see video clip on Youtube below).
?
Our condolences once again to the family, relatives and friends of Vartuhi Vartanian.
?
Your memory will always be bright in our hearts…..
?
Photos:
1- Concert poster in memory of Vartuhi Vartanian.
2- “To the memory of Vartuhi Vartanian”, performed by all participants.
3- Vartuhi?s son, Roupen Avoian, sings a very dynamic song accompanied by a dancing kids show.
?
Read also:
Tebi yergink ?To the sky? ? to Vartuhi Vartanian
?

?
“To the memory of Vartuhi Vartanian” (all participants):
?
?
?
ADDITIONAL PHOTOS FROM THE EVENT (Click to enlarge):
?