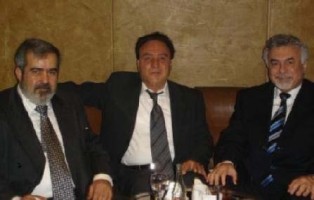 The topic of the dicussion was adopting common national platform
?
Leaders of the international governing bodies of the ARF Dashnaktsoutiun, the ADL Ramgavar and the SDHP Hunchak Party met in Paris on 5 Febraury 2007 to discuss national issues and a new quality of cooperation to consolidate efforts around various pan-Armenian issues such as Hay Tad and the recognition of the Genocide, lobbying for Armenia as well as issues of security related to the Armenian community of Lebanon.
?
Michael Kharabian, Chairman of the Central Executive of the Ramgavar Party, Setrak Adjemian Chairman of the Central Executive of Hunchak Party and Hrant Markarian Chairman of the ARF Dashnaktsoutiun Bureau agreed during the several hour-long meeting that similar meeting will be held in the future to address issues of concern to all Armenians and the three parties.
?
“Maybe this will become starting point of consolidation of Diasporan political forces. We are defining the spheres of cooperation at this stage, and the main program will be soon elaborated by the working group,” Dashnaktsoutiun Bureau representative Hrant Markarian said.
?
Source: Gibrahayer, 14 Februrary 2007