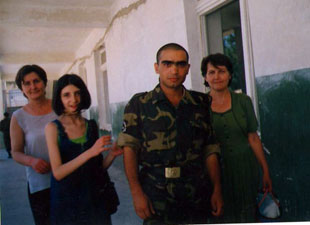 After filing the below report news emerged about the killing of six Armenian soldiers in a case most probably related again to power abuse and corruption.

According to the official version Nazaryan, 32, committed suicide while serving in a border unit in Tavush Province on 27 July 2010, but friends and relatives confirm that there has been sings of torture and beatings on his body.

The death of Nazaryan reveals the increasing rate of torture in Armenian army units by senior officers.

Nazaryan?s sister Tsovinar Nazaryan is a journalist doing her MA in Communication in Howard University in Washington DC. She has volunteered with Policy Forum Armenia in organizing Diaspora Forum earlier this year.

?Whoever humiliates, beats, robes and kills Armenian soldiers should not enjoy a comfortable life in this country?, he warns.

A Facebook group fighting against torture in army ranks was formed and acquired hundreds of members in a matter of days. ?We present our condolences to Nazaryan?s family in these difficult moments and express our readiness to follow this case to reach to the whole truth behind the incident?, said the administrator of the group.

Service for the rest of Nazaryan?s soul was performed on 29 July 2010.

Another blogger, Artmika, says: ?It was shocking… not because it was the first such incident? not only because he was a brother of journalist, friend of many Facebook users ? it was shocking… because IT IS SHOCKING. Any single suicide case in the army is shocking?.

Artmika wonders: ?How long this culture of abuse and ill-treatment will continue in the Armenian army??

Janna Alexanian of Lragir.am described the detailed related to the incident.

According to her, signs of torture and abuse on Artak's body have occurred 6 hours before his death. This was demonstrated by examination performed on the body in the presence of family members.

Ministry of Defence's department of public communication did not wait for the examination results and announced that lieutenant Nazaryan has taken his own life.

Family members reject this and refer to the troubled last days of Nazaryan's life.

“Mother, I would like to be a different commander. Another type of officers are functioning here. I do not like to resemble them. I want to develop patriotic motivations in my soldiers”, he was quoted saying to his mother 10 days before his alleged suicide.

Artak Nazaryan has completed Orientalism (specialized in Persian Studies) and served as translator in the Armenian Embassy in Tehran. He has joined the army after he could not find permanent work in his specialization.

Azad-Hye expresses its condolences to the family of the young officer and calls for reforms in the Armenian army. Covering the inhumanities inside the army will eventually weaken it and endanger the future of the country.