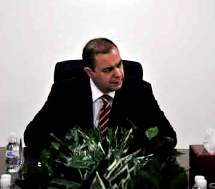 Until now the Kuwaitis have recognized the Armenians as a community, now they will see that this community has its own state.

His Excellency Ambassador Fadey Charchoghlyan was born in Yerevan in 1973. He is a graduate of Yerevan State University?s Faculty of Engineering. A year after his graduation he joined the Ministry of Foreign Affairs and was employed in the Economic Department. His first mission abroad was in Egypt, as Consul. After 3 years in Cairo he served several months in Los Angeles as Consul in 2005. After returning to Armenia, he first worked in the Ministry?s protocol department, before being appointed as head of the Presidential protocol department, a post that he occupied until 2010, when he was appointed as Ambassador in Kuwait. He is married and has two children.

On 29 March 2010 President Serzh Sargsyan signed a decree according to which Fadey Charchoghlyan was appointed as Ambassador Extraordinary and Plenipotentiary to Kuwait (residence in Kuwait City). On 01 June 2010 Ambassador Charchoghlyan presented his credentials to the Emir of Kuwait, Sheikh Sabah Al-Ahmad Al-Jaber Al-Sabah.

Azad-Hye had the following interview with His Excellency Ambassador Fadey Charchoghlyian in the new premises of the Embassy.

You have been appointed as the first Ambassador of Armenia in Kuwait. Can you tell us about how this post was created?

President Serzh Sargsyan visited Kuwait in November 2009 and met with the Emir and the Prime Minister. He personally witnessed how warm is the attitude of the Kuwaiti government towards Armenia and the Armenians. Following that he took decision to open the Embassy. Until then the Embassy of Armenia in the UAE was taking care of Kuwait.

Since the decision for opening the Embassy, the Kuwaiti government has providing us with many facilities including Embassy premises, diplomatic residence, vehicle, etc. This has made our task easier. We thank the Kuwaiti government for the generous support and continuous attention. It is really difficult to start up a new Embassy. Even the slightest details, such as telephone communications, installations, decorations, furniture, etc, can cause headache if they are not sorted out in the proper way.

Although we are somehow late in opening an Embassy in Kuwait, we can now proceed in quick steps forwards. The opening of the Embassy has accelerated the mutual relations. For example in June 2010 Kuwait?s Minister of Finance Mustafa Al-Shimali has visited Armenia and signed agreement on the encouragement and mutual protection of investments between the two countries.

The Embassy has been functional since June 2010, but the official opening ceremony will take place later.

In the Arab World now we have Embassies in Cairo, Beirut, Damascus, Abu Dhabi and Kuwait City, besides the General Consulate in Aleppo.

How would you assess this step and what are the prospects of the relations between Armenia and Kuwait?

Our presence here in Kuwait has great political and economic significance for Armenia. We consider Kuwait as a very friendly country and we are going to closely cooperate with the Kuwaitis and the Embassy will facilitate this process.

During the President?s visit to Kuwait last year several cooperation agreements were signed between the two sides, including agreements on cultural, tourism, agricultural and taxation issues. 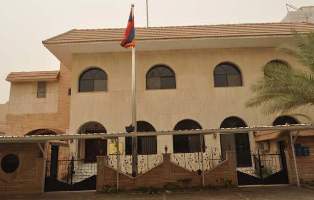 There are a number of economic, cultural, financial and other programs that need to be considered. It is worth mentioning here that the two countries have similar views in almost all aspects. There are no conflicts whatsoever between the two sides. Also it must be mentioned that both countries somehow belong to the same wider geographical region and are affected by the existing conditions in the area, therefore they have strong reasons to communicate and establish methods for proper consultations.

Usually we hear from visiting Armenian officials, that the political relations with Arab countries are at high level, but the economic cooperation is somehow disappointing or in a low level. Does the Ministry of Foreign Affairs in Armenia consider nowadays developing the economic factor in the relationship with these countries?

Unfortunately the volume of our economic and trade transactions with the Arab World is far below our expectations. The political factor is taking the toll because we are spending time and concentrating on providing the right information to these countries about Armenian issues including Karabakh.

However, Armenia has great potential in many spheres, such as medicine, chemistry, transportation, education, etc. We need to create investment opportunities in these domains. The Kuwaitis have indicated that they are ready to participate in well-studied projects in Armenia. I am optimist in this direction.

Are there signs that Kuwait has been affected by negative propaganda against Armenia and Armenians, especially in the circles of the Organization of the Islamic Conference (OIC), which is sometimes used as a platform for Turkish and Azerbaijani propaganda?

We are working in the direction of OIC. Unfortunately, since 1993 OIC has recognized Armenia as an aggressor and has approached Karabakh issue from religious point of view, which is not correct at all. We are demonstrating to Kuwait and to all other Islamic countries that the issue has nothing to do with religion. We have excellent relations with many Islamic countries, hundred of thousands Armenians live in Islamic countries and they have integrated in the local societies without any conflicts.

Some institutions that operate in Kuwait and work for Islamic welfare are periodically invited to Azerbaijan, where they are offered a falsified version of the history of the Armenians. How this could be confronted?

We are aware of this type of Azerbaijani propaganda and the way they exploit Islamic institutions. The Azeri Ambassador in Kuwait also is very active in this domain and is spearheading large scale propaganda against Armenia. He is preparing exhibitions where he is fabricating information portraying Armenians negatively. He is giving interviews to local media, where he is accusing Armenians about all kind of evil. I believe such crude propaganda is not diplomatic at all and will certainly backfire and put Azerbaijan in awkward position. The Kuwaitis, who know that the conflict has no religious roots, will stop giving any credit to what he says and this is exactly what is happening now. Of course we will work in the direction of providing real information directly to the Kuwaitis, now that we have an Embassy here.

The Azeri Ambassador likes to compare the Karabakh conflict with the Iraqi invasion of Kuwait, but he forgets that the aggressor in the case of Karabakh was Azerbaijan, while Armenians were defending themselves. The comparison therefore is false and serves only to taint the Armenians as aggressors.

Fortunately, the Kuwaiti authorities are completely aware about the facts and they would not be intimidated. For example they see that the essence of Karabakh conflict is not religion, because Armenia has excellent relations with the majority of Arab and Islamic countries. Therefore the issue does not have a religious background. Tens of thousand Armenians live in Islamic societies in peace and tranquility. Kuwait is sure that Armenia is trying to solve the Karabakh conflict in peaceful means.

Why the Armenian – Turkish relations are almost frozen now?

The reason is that Turkey did not ratify the protocols and tried to tie the ratification with preconditions that did not exist in the original text. Our position is clear: We are ready for developing relations with Turkey but without preconditions.

Kuwait is looking positively to the Armenian – Turkish approach and is keeping balance in its evaluation of the developments, without adopting the viewpoints of any side.

Are you working on establishing direct flights between Armenia and Kuwait?

I am working on this from the first moment. I made many contacts in Yerevan with our aviation officials and there is directive from the Presidential office to examine the feasibility of direct flights. There is difficulty because business relations are not so developed between Armenia and Kuwait. Another reason is that Kuwait is not an incoming tourism destination like, for example, Dubai.

There is possibility to assign one of Armavia?s flights going to Dubai via Kuwait. Armavia is expanding and has just opened new lines to New Delhi, Larnaka and other cities. If the load factor is justified, Armavia would definitely consider Kuwait as a point to point flight. The Kuwait ? Yerevan line can serve also travelers heading to other destinations in CIS.

Who helps you in the Embassy work?

As part of the staff I have Armen Sargsyan, First Secretary and in charge of Consular Affairs. He is a graduate of oriental studies (in Arabic) and has gained previous experience in the Arab world by working in our Embassy in Abu Dhabi.

I had some background knowledge about the community and I was extremely pleased to see how the Armenians in Kuwait are faithful to their traditions and national values. They are very much keen in teaching their children Armenian and preserving the school and the church. I had official and non-official contacts with Armenian bodies and individuals in Kuwait and visited the existing two institutions (church and school) and witnessed how strong the Armenian community life is in Kuwait. I was particularly impressed to see that the students of the Armenian school study Armenian language, literature and history.

I have met with the Council of the Armenian Community and representatives of the Armenian organizations in Kuwait. My impressions are very positive. I noticed the joy in which they are looking into Armenia and its Ambassador. I am frequently receiving spontaneous calls from Armenians in Kuwait who are offering all kind of assistance. ?Is there anything we can do for the Embassy??, is the most common sentence I hear. This is very encouraging. They are all very proud that the Armenian flag will be raised in Kuwait. This is one of brightest experiences in my career. Personally, I have not been involved with any political parties in my life, therefore it is easy for me to say that the Embassy is open for everyone and I am personally ready to meet with everyone who wants to see me, regardless of his or her position in society and political beliefs.

I see that the community is so close to each other as if they are one big family. Until now the Kuwaitis have recognized the Armenians as a community, now they will see that this community has its own state. The Embassy will be a great support for everyone. The relations with the community members will have a contentious character. The ceremony of raising the flag on the Armenian Embassy is something that is creating a great emotional moment. A separate pole has been prepared for the flag.

Will the citizenship applications for Diaspora Armenians be accepted in the Embassy?

Yes, the Embassy is already accepting the applications. Kuwaiti Armenians used to be served by our Embassy in Abu Dhabi. This has created complications because of the distance, but now it is easy, because the future citizens need to apply through the Embassy in Kuwait.

The Embassy of Armenian in Kuwait is located in Jabriya District, one of the districts of Hawalli Governorate. Jabriya is one of the best situated areas in Kuwait City. It has easy access to highways. Many other foreign Embassies are located there. 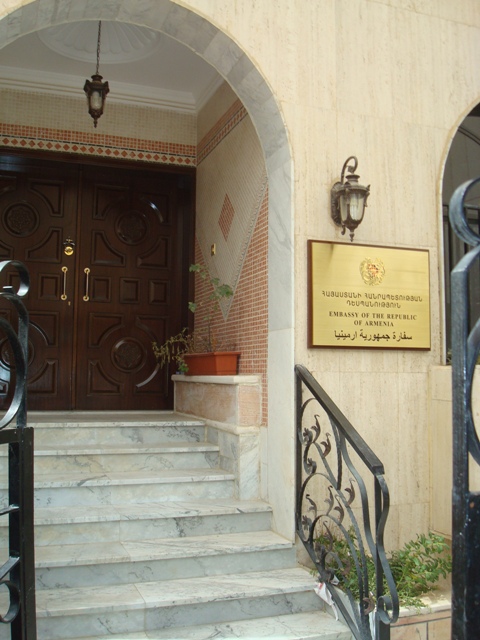