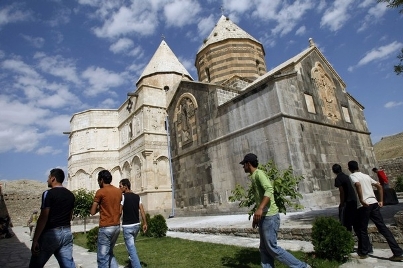 St. Thaddeus Church, an Iranian site which was registered on the UNESCO?s World Heritage List in 2008, has been marred by scaffolds and metal buttresses.

The former Iranian government set up the scaffolds and buttresses over 30 years ago to restore the ceiling and the dome of the church, the Persian service of CHN reported on Wednesday.

The restoration remained incomplete after the Islamic Revolution in 1979 and so far nothing has been done to remove the temporary supports.

Experts believe that the dome and ceiling will collapse if the scaffolding and buttresses are removed.

In addition, the growth of agrarian plants in the gaps between the giant stone blocks used in construction of the ceiling and dome is threatening the site.

The St. Thaddeus Church, also known as the Black Church (Qara Kelissa), is one of Iran?s most interesting and notable Christian monuments, located near the Chalderan region in Maku, West Azerbaijan Province.

One of the 12 disciples, St. Thaddeus, also known as St. Jude, (not to be confused with Judas Iscariot), was martyred while spreading the Gospel. He is revered as an apostle of the Armenian Church. As legend has it, a church dedicated to him was first built on the present site in 68 CE.

Nothing remains of this original church, which was extensively rebuilt in the 13th century, but some sections around the altar may date back to the 10th century. Most of the present structure dates to the 17th century and is built with carved sandstone. The oldest sections are made of black and white stone.

The Apostles Thaddeus and Bartholomew traveled through Armenia in 45 CE to preach the word of God. Many people were converted and numerous secret Christian communities were established there.

Around that time, Abgar died after ruling for 38 years and the Armenian kingdom was split into two parts. His son Ananun crowned himself in Edessa, while his nephew Sanatruk ruled in Greater Armenia. About 66 CE, Ananun gave the order to kill St. Thaddeus in Edessa. The king?s daughter Sandokht, who had converted to Christianity, was martyred with Thaddeus. Her tomb is located near the St. Thaddeus Church.

The church is surrounded by thick walls which form the outer ramparts of some abandoned monastery buildings.

A large part of the church was destroyed during the Genghis Khan invasion. However, Persian scientist Nasir ad-Din Tusi, who was a scientific adviser of the Mongols during the reign of Hulegu Khan (c. 1217?1265), grandson of Genghis Khan, restored it.

Each year, Christians from all over the world gather at the church on July 1 for their annual commemoration of the martyrdom of St. Thaddeus.

On July 6, 2008, St. Thaddeus Church and the Iranian churches of St. Stephanus, and Dzordzor (Zorzor) were registered on UNESCO?s World Heritage List.