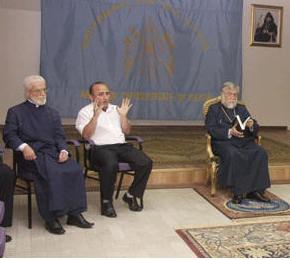 Tatoul Hagopian (Tatul Hakobyan) is an analyst with the Civilitas Foundation in Yerevan. He has worked with several Armenian newspapers, including Azg (Yerevan), Armenian Reporter (USA) and Aztag (Beirut).

His book “Karabakh Diary – Green and Black, Neither War Nor Peace” was originally published in Tehran in 2008 and was introduced to the public through series of book presentations in Stepanakert (Karabakh), Beirut and Ainjar (Lebanon), Aleppo (Syria) and other locations.

Hagopian's book reflects on events related to Karabakh in the past 20 years.

During the book launching event, the audience asked questions related to Armenia-Diaspora relations and the current escalation between Armenia and Azerbaijan. Tatoul Hagopian answered the questions based on his experience on the subject.

Catholicos Aram attended the event and expressed appreciation to Hagopian's research work, while he underlined the importance of unity among the Armenians. “As a nation we need each other and we should build our nation together by supporting one another”, His Holiness emphasized.

Following the presentation, the Seminary students presented a cultural program.

Newer PostArtak Nazaryan: Not the latest casualty in the Armenian army
Older PostKosovo's recognition by the International Court of Justice could be precedent for Karabakh