An Interview with Editor Shahan Kandaharian

During the many decades that I have lived as an Armenian-Lebanese in the Diaspora, also known as “al-mahjar” in Arabic, never have I broken my ties with my birthplace and especially the Armenian-Lebanese community.

Lebanon, and many countries of the Middle East — and especially those in the vicinity of the genocidal killing fields in Turkish-occupied Western Armenia — Syria, Iran, Iraq, Jordan, Palestine (Israel did not exist back then) and Egypt, have a special place in the hearts of Armenians worldwide. It is with deep sense of gratitude that I, along with succeeding Armenian generations, remember that these noble states sheltered our orphaned grandparents escaping from the genocide of 1915-1923.

For me as an Armenian-Lebanese, one of the ways to keep in touch with Lebanon has been the Armenian-Lebanese media mainly consisting of ARF Dashanktsutiune's Aztag daily, Hunchakian party's Ararad weekly, and Ramgavar party's Zartonk bi-weekly. In recent years, I have visited the editorial offices of the party organs and others and had very interesting and educating conversations with their respective editors.

During my and my siblings' (Ani, Vatche and Sako) formative years in the 1960's and the '70's, our household in Nor Sis (New Sis, named after the capital of the Armenian Kingdom of Cilicia), in the Armenian municipality of Bourj Hamoud, was continuously enriched by various Armenian publications and Aztag was certainly one of them. To me, Armenian publications and equally respectable Lebanese dailies such as the Arabic-language Al-Nahar and Al-Anwar, and the French-language L'Orient-Le Jour and Le Soir, and monthly La Revue Du Liban were a home within a home.

Each publication has a unique history; some of them spanning over several decades. Recently Aztag daily turned 80 years old. Each of the passing 80 years brought technological and publishing challenges that were successfully overcome by the staff of Aztag under the watchful eyes of thousands of avid readers in Lebanon and around the world.

Despite navigating through eight continuous and sometimes arduous decades, this Armenian daily does not show any signs of weakening. It's the opposite. It has become very relevant for Armenians in the Diaspora.

In order to present our readers with a glimpse of day-to-day life at Aztag, I conducted an interview with Shahan Kandaharian, a young and creative Editor.

The following is the text of the conversation:

– How do you explain the eighty year-long existence and prosperity of Aztag despite the crises experienced by Lebanon and the Armenian-Lebanese community?
Talking about Aztag Daily's noticeable progress requires subjective narration, which I would like to avoid. Nevertheless it would be fair to make notes in an objective fashion or to discuss the achieved plans. I'm convinced that one should not be satisfied; there is still more to be accomplished; and follow-up efforts still need to be carried out. The founders and the succeeding directors all have made invaluable contributions. It is thanks to them that the daily continues to breathe and to thrive since its inception 80 years ago.
I think, working in synch with contemporary demands, in terms of both content and style, is the main prerequisite for ensuring the daily's continuity. You know firsthand, as to how extensive an effort must be made on a daily basis in order to carry out uninterrupted daily publishing throughout the past decades. And in the case of Armenian media, one can envision the level of devotion and commitment by my predecessors.

I'd like to add that it is impossible to imagine the daily's survival without the ideological power which backs the daily: The Armenian Revolutionary Federation. The Dashaktsutiune's multi-faceted contributions are the principle source of the daily's vibrant performance.

We should also recognize the decades-long beautiful tradition of group cooperation that has been the prevailing modus operandi among all the departments – editorial, management, technical, printing and distribution.

It is the entirety of all these elements that in the face of crises, difficulties and tribulations experienced by Lebanon and the Armenian-Lebanese community enabled the daily to be in a leading position in the Armenian media.

– How do you rate the level of effectiveness of the Armenian-Lebanese media in general and Aztag specifically?
I can only venture to talk about Aztag. The size of the readership of our electronic medium/website or the number of the visitors surpasses the number of the readers of the print version. To be fair, the Armenian-Lebanese expatriates' existence outside of Lebanon plays an important role in making Aztag Daily's website so popular. 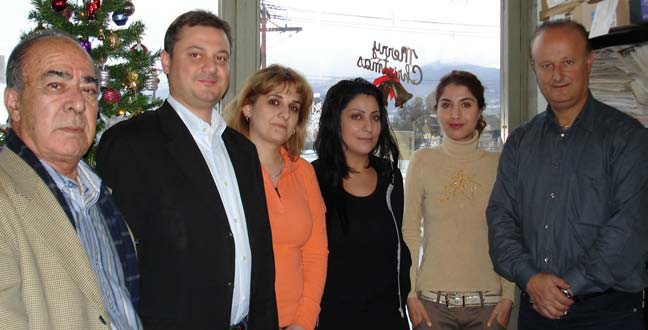 In a very short period after the website was launched that we realized that the longing by Armenian Lebanese is an integral factor. In other words, Aztag Daily's website (www.aztagdaily.com) has become a bridge of communication for the Armenian-Lebanese and for that matter all Armenians who are interested in closely following developments in the community in Lebanon.

Our website has a multi-media section. An increasing number of readers visit the website in order to watch certain interviews or to read a particular news item, written in a concise style, about an event organized by a certain organization. Now we're in the planning stages for facilitating direct web casting of events, interviews, press conferences and round table discussions.

The website also facilitates the flow of news. The website's stability in timely dissemination of the news about the Lebanese political and security tribulations has become indispensable especially for those circles that continue to be deeply concerned about the welfare of their compatriots.

– For many, Aztag daily has become “a second school.” Can you please elaborate?
Today, I wouldn't go that far in qualifying Aztag daily as being “a second school.” For the preceding generations, I think a similar statement would have been appropriate based on their testimonies. But today, I don't come across similar testimony made by members of middle or younger generations. In terms of the crowded field of international media, Aztag Daily's primary function for the Armenian reader is to first and foremost be a means to follow Armenian community life and to evaluate the role played by the Armenian factor in the general political landscape of Lebanon.

– Is the electronic media a threat to the existence of the print media?
The World Wide Web and its facilitation of electronic media naturally is a revolution in the field of journalism. The print media's ability to disseminate news is slow. Today, the speed of dissemination by concerned parties of news regarding any event, taking place in any corner of the world, is enhanced by the technology of satellite transmission via websites.
When TV became popular, people started saying that the print media's role has become meaningless. When TV entered into peoples' homes some started questioning the importance of radio. When the web became popular and the electronic media proliferated, the question of the day became: “Has the print media become endangered?” The fact remains that today, the radio, print media with its varying formats, and TV are all working. I'm convinced that all the mass media – although different in format and style – will continue to function. The issue remains to be the challenge of adaptation to new conditions of speedy accuracy.

– Can you talk about the activities organized by Aztag Daily?
In addition to the ten-page daily, there is the task of maintaining the website in English language format and the flow of news. We also have the publication of the weekly supplement of Yerkir weekly in Mesrobian (classical) Armenian orthography; the children's “Bzdig M'uzdig” (“Little Mittle”) publication that has been widely acclaimed and that serves the purpose of establishing a tie between the child and the print media from a very young age. The young children not only read the publication but also contribute to it. They present drawings in its pages. The editorial team and the auxiliary committee annually organize two competitions: the first in composition and the second in orthography. Around three hundred fifty Armenian students, representing all the schools in various parts of Lebanon, participate in these competitions.

The Aztag monthly mirrors the essential events and developments related to the Armenian life.

We also have the Aztag Literary and Aztag Arts periodicals that are devoted to narrating the artistic life in their respective fields in Armenia and the Diaspora.

Presently, the editorial board is holding consultative meetings with editorial teams of Armenian schools for the specific purpose of creating a medium where youth-related issues can be further explored.

All these efforts pursue the goal of tapping into the collective intellectual potential. I think that's one of the functions of contemporary Armenian media.