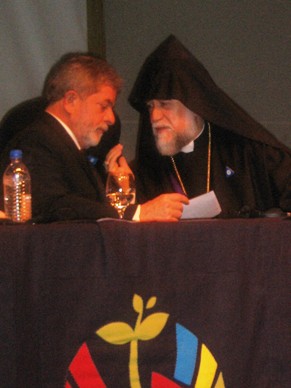 Azad-Hye, , 19 February 2006: Catholicosate of Cilicia?s newsletter reports that I met on 17 February 2006 with Luiz Inacio “Lula” da Silva, the President of Brazil. The ministers of education and executive reform of also attended the meeting. The two sides discussed the social and economic reforms being carried out in , the church-state relations in the country and the role of the World Council of Churches (WCC) during the meeting that lasted about half an hour.

Following this meeting they moved into the plenary hall where the 9th Assembly of the WCC was being convened. Speaking in front of about 2000 participants, I said: ?Many years ago only meant football, the forests of Amazon and carnivals, that is music and dance. The world sees different values in today. Democracy, the fight against violence and corruption, social and economic reform are greeted with special praise today. , where we are gathered today, means door to happiness in Portuguese. If new cities were to be constructed in , I would have wished them to be named Porto Esperanza that is door to hope, Porto Vida that is door to life?.

President Lula then spoke in detail about the various reforms in the economic, social, educational fields and democracy related issues.

The 9th Assembly of the World Council of Churches continues in under the chairmanship of His Holiness Aram I and with the active participation of the delegates of the Catholicosate of Cilicia.

Earlier, on 16 February 2006 the sessions of the Assembly focused on issues related to social and economic injustices. The president of the , as well as specialists from Africa, Latin America and presented topics about these issues. Speaking on the issue of justice, delegate Dr. Nora Bayrakdarian-Kabakian, Political Science professor at two Lebanese Universities, proposed that it become one of the priorities of WCC not only in the social and economic areas, but also in fields related to human rights and genocides.

The delegates of the Catholicosate of Cilicia are also active in the committees formed by the Assembly as follows:

– Nominations Committee: Archbishop Sebouh Sarkissian (Primate of the Diocese of )

– Presenter of Women Issues Committee: Miss Carla Khijoyan (chairwoman of the former committee of the Union of University Students of the Armenian Church).

1- Catholicos Aram I and the President of .

2- An overall view of the plenary hall.