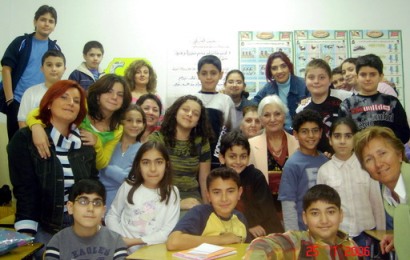 Azad-Hye, Dubai, 22 February 2006: Arousiak Sahakian, philologist, ethnographer and folklore researcher has been a guest in the during January and part of February 2006. Azad-Hye had the opportunity to conduct the following interview with her on 14th January 2006:

Who organized your trip to the ?

Initially I was invited by one of my old folklore dance students (Nvart Hovhannisian), who lives now in Sharjah (), but as you may realize, my trip needed to be arranged through official channels. For this I am obliged to Lorig Katrjian, the Principal of the weekly in Sharjah, to whom I was introduced in last summer. She happened to know a lot about my activities in and Diaspora, especially the 2 months of prolific presence in in 1997, during which I gave series of lectures on folklore, mythology, customs, traditional crafts, songs and dances, etc. I even prepared a course in embroidery, although I am not an expert in it, but I could easily find a link with folklore and traditional crafts, especially in a location like , where some of the oldest Western Armenian embroidery traditions are still alive.

Have you been frequently visiting Armenian communities?

During the Soviet era, our contacts were almost limited to few geographically close places, such as , and . My own impressions about the Diaspora are originated from my studies in Western Armenian Renaissance literature, which flourished during the 19th century in Constantinople (). In our academic curriculum we used to review the works of many Western Armenian writers. This kind of knowledge proved to be useful when I started contacting Diaspora communities, but still I was lacking many other elements.

and Diaspora represent two different sets of values. Personally I respect both worlds. No side should prevail on the expense of the other one. This diversity should be seen as a source of wealth. Generations of Armenians living abroad have accumulated experience in communicating with other cultures in globally challenging environment. We should benefit from this experience.

Some people might consider the existence of these two worlds ( and Diaspora) as a cause of division and duality.

This is narrow-mindedness. Although it is true that we aspire to see all Armenians living in the homeland, we cannot ignore the reality of the Diaspora. We have already two branches of the modern literary language. There are two transcriptions. Once I was asked about my position on reinstating the traditional Mesrobian transcription. I said it is a historical fact that we already have two literary languages, which we consider as a source of richness, so why we should opt to unify the transcriptions after using the new transcription for more than eight decades. Two of the Diaspora personalities Hilda Kalfayan and Hagop Balian, both from , waged a tough war against the new transcription (branded by them as Abeghian or Soviet). Kalfayan wrote an open letter to the famous linguist Gevorg Tchahoukian (died last year), describing the new transcription with very offensive words.

In my opinion, demanding to have one dictation is already a project for division not unity, because you will have to force the dictation on the other side. This only can lead to split. I think the best way to deal with this subject is to let it to the test of time. The loss of Western and Eastern Armenian dialects is a greater issue than the adoption of the new dictation. Many elements of the ancient Armenian language were kept in the now distinct dialects. Why those critics are not worried about the loss of this treasure? Instead they are trying to exaggerate the case of the two transcriptions. Those who are raising the transcription issue are forgetting that the Western Armenian has lost a lot of its phonetic values compared to Eastern Armenian which preserved the phonetic values.

Do you think that the economic situation in is in progress?

Although I am not economic expert, but from what I see, the term ?business? has acquired a different meaning in . For 7-8 decades Armenians did not really know what business is. What they are experiencing now are only one-sided transactions, concentrated on quick gains. This kind of understanding is harming the society and is creating unhealthy business atmosphere. We need to consider the individual as a core value.

How do you assess the experience of the Armenian communities in the ?

The 80 years of tradition in the , which preserved the Armenian identity here rather than in any other place in the Diaspora should be continued. Armenians in these countries have experience in managing community life and caring for their traditions and language. I am pleased to see the UAE Armenians not divided into religious or political fractions. The organized community life especially in the educational domain has led to the introduction of a unified Western Armenian language in the Diaspora and has resulted in the loss of the rich dialects, but nevertheless the cause was noble. Armenians from different places and cultural backgrounds learned to live together and to accept a common language. This factor united them in the struggle for their national rights.

One of the painful experiences that had to go through and still is suffering from its results is human trafficking. You have expressed the view that prostitution in is to be blamed on the male population, because they are in fact paying for the offered ?services?. What about the prostitution on a larger scale that crosses the border and transfers into the regional or international arena? What can we do about it?

I remember a saying in Armenian that goes as follows: All beggars should be sympathized except the Armenians, they should be discouraged. Why not apply the same to the prostitution and human trafficking? Provide employment opportunities and the problem will be solved.

The mission of rescuing the entrapped women from the control of the human traffickers is laid upon the Embassy of Armenia in the . The Embassy should not be only involved in protocol meetings and sending congratulation letters on different occasions. It should not spend its time by preparing tour packages to high level government officials who pick UAE as a place for their seasonal vacations. Rather it should feel completely accountable for this shameful problem. On the other hand, I cannot understand how our male political leaders do not feel uneasy, when a sizable proportion of our female society is threatened to become victims of human trafficking. Let Ambassadors stop thinking that their job is hosting national day events with glamour, while citizens who need their urgent attention are only few kilometers away. 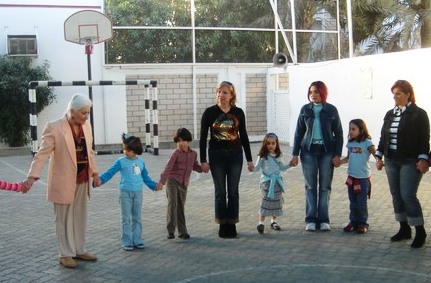 Embassies should do more than stamping or ratifying official documents. They should understand that the problem is directly affecting the ?Hay Tad? (Armenian Cause) and the image of the Armenians in Diaspora communities. This is true especially in the , where the wider society is conservative. How can we convince our sympathizers that our grandmothers resisted the efforts of turkification, preferring to throw themselves into the , instead of surrendering to the Turkish soldier, when their granddaughters are dishonoring their memory? I do not believe that those Armenian women are doing so out of absolute need. The majority now know exactly what they are doing. I wonder what kind of Armenians are they and how did they emerge like a mushroom in our society during the last one or two decades?

What is the last word you want to say?

As a nation we should prove that immigration is not in our blood as some critics would like to hint at. We should find ways to prove that we belong to Armenia even if we are not living there. I understand that in most of the times we are not capable of taking big decisions like repatriation, due to economic burdens and prevailing lifestyles. Even in Armenia people of countryside origin, like me, find difficulty now to return back to the villages and live a different life than what they experience in Yerevan.

One final thought: Wherever one hundred Armenians come together, a new little Armenia will be born, but this is not to be confused with the homeland, which is one and single.

Researcher in women?s role in family, society and mythology, from ancient times until the present days.

Graduate of the Philological Faculty of Yerevan State University (1962).

Senior staff member at the Institute of Archaeology and Ethnography, National Academy of Sciences (1965-2000).

3) Collection of popular Armenian music and songs from Taline, with other collaborators, Yerevan, 1984, 221 pages.