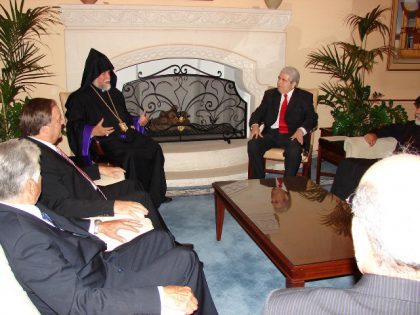 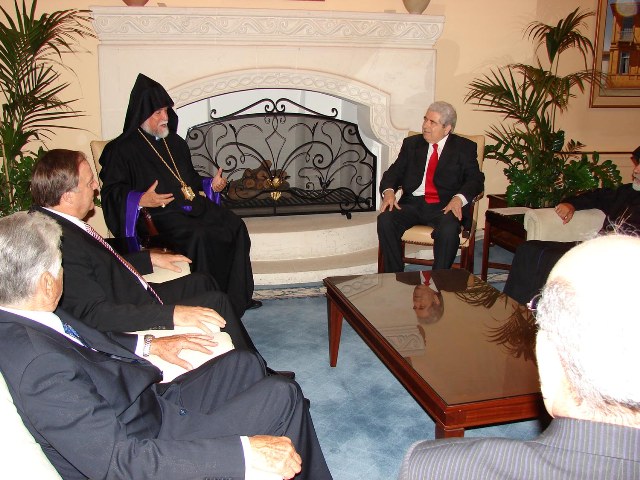 His Holiness Aram I paid an official visit to the President of Cyprus, His Excellency Dimitris Christofias, on 21 July 2008. His Holiness was accompanied by Archbishop Varoujan Hergelian, the Pontifical Vicar in Cyprus, Vartkes Mahdessian Armenian Representative in the House of Representatives, Dr. Antranig Ashdjian, Chairman of the Armenian National Committee and others.

The first ever meeting between President Christofias and the Armenian Pontiff included several items on its agenda. In the first instance, His Holiness congratulated the President on the occasion of his election. Discussions revolved around several issues of interest to the Armenian community of Cyprus. In light of the negotiations for the island?s unification, His Holiness talked about the Monastery of Magar, the old prelacy and the Armenian Quarter situated in the Turkish part of Cyprus. The Cypriot President explained to His Holiness the details of these negotiations.

Prior to his departure from Lebanon His Holiness held a phone conversation with the President of Lebanon, His Excellency Michel Suleyman, whose greetings the Pontiff later conveyed to the Cypriot President. The Pontiff and the President also talked about the internal situation of Lebanon and the prospects for the improvement of relations between the two churches.

President Christofias spoke in praise about the Armenian community of Cyprus and welcomed the stabilization of political life in Lebanon. The centuries-old friendship between the Armenian and Greek people was another topic on the agenda.

Given the shared historical experiences between the two nations, His Holiness stressed the importance of Cypriot support for the recognition of the Armenian Genocide.

Source: The website of the Catholicosate of Cilicia
www.armenianorthodoxchurch.org
22 July 2008 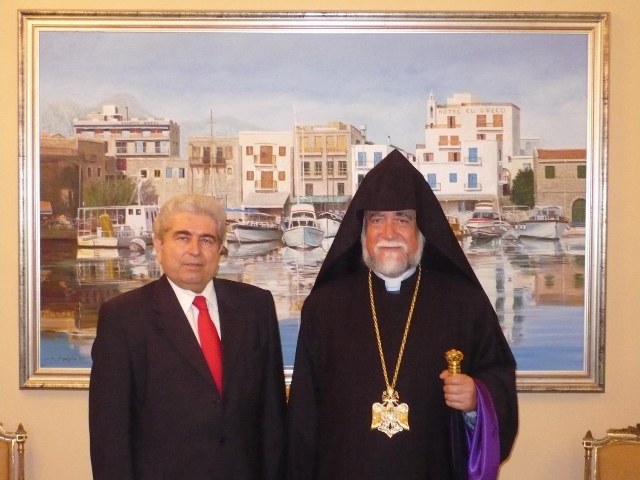