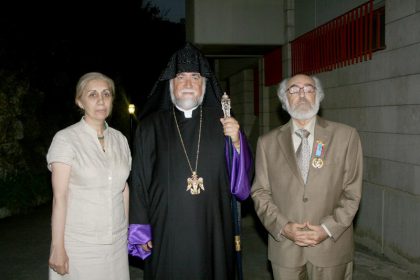 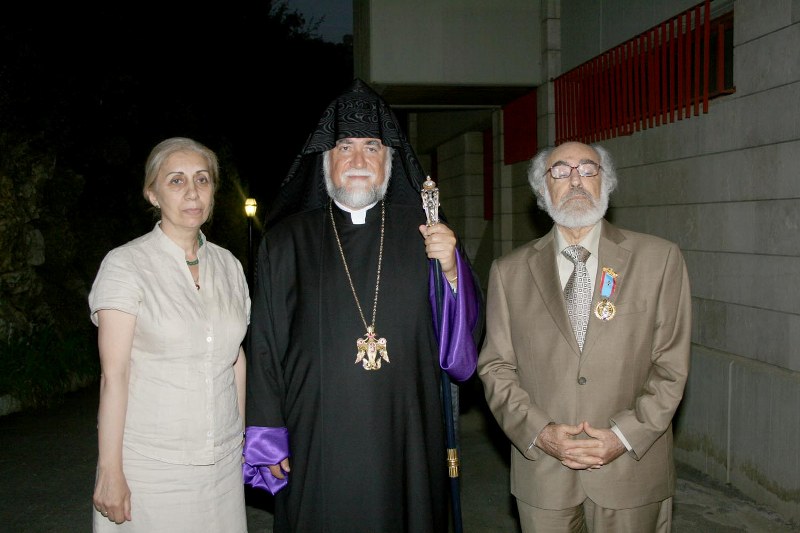 His Holiness Aram I awarded the ?Saint Mesrob Mashdots? Medal to Lebanese Armenian artist and painter Haroutioun Torossian during a ceremony in the Saint Asdvadzadzine Monastery in Bikfaya on 18 July 2008. The event also celebrated the launch of Torossian?s ?Tidangouynes? (?From my Perspective?) book.

Father Sahag Yemishian delivered the opening remarks of the event, highlighting the importance of art and its influence on the lives of people.

Well known pedagogue Krikor Shahinian, an old friend of the artist, then spoke about Torossian and his paintings. ?The lines of his paintings are clear and firm, his shapes are impressive but not severe.? Due to his long-standing friendship with Torossian, Shahinian had come to know the man beyond the artist. ?He?s a good man and a passionate Armenian. It is a true pleasure to see artistic skills and moral values on one person?, Shahinian observed.

Speaking in French, Mrs. Mary Therese Tabet portrayed in detail the artist?s personality. ?The art of Haroutioun Torossian is an experience that enriches the soul, specially when produced by an artist who has such a sensitive spirit,? she said.

A student of Torossian, Hanna Bou Soujwan, expressed his gratitude towards her teacher. ?An artist in every sense of the word, he never knew hatred, nor rest. He breathed with the colors, having Lebanon as his source of inspiration,? he said in his Arabic speech.

In his concluding remarks, His Holiness Aram I upheld the characteristics of Torossian the man and the artist. ?Haroutioun Torossian is the combination of simplicity, love and spiritual values. As an artist, he has been one that has remained peaceful at times like the calm sea and restless at others like the stormy sea.? His Holiness highlighted three unique characteristics in Torossian: the artist of letters, colours and lines; the artist of dialogue between east and west; the artist who clearly articulates the spirit of what does it mean to be Armenian.

His Holiness observed that Torossian had produced his art with faith and a firm dedication to our nation?s values. ?We come and go, but we remain in the life  of people by what we give to humanity? added the Pontiff.

His Holiness then placed the Catholicosate of Cilicia?s ?Saint Mesrob Mashdots? Medal on the artist?s chest as a symbol of appreciation for his valuable work.

The event also featured a cultural entertainment program including a performance by Father Torkom Donoyan on the piano. The ceremony ended with the collective singing of ?Cilicia?.

Source: Website of the Catholicosate of Cilicia
http://www.armenianorthodoxchurch.org
18 July 2008 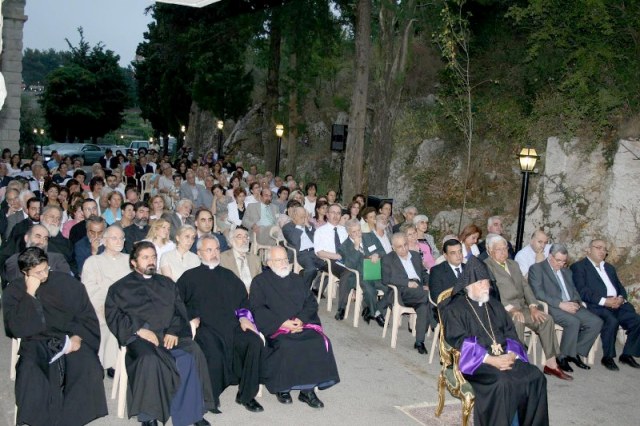