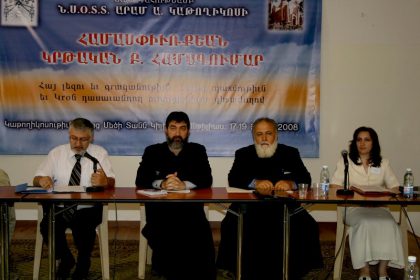 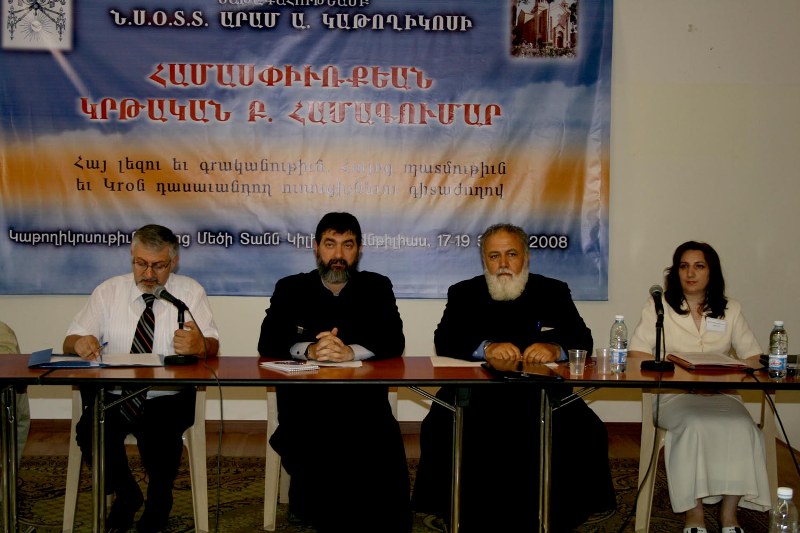 Aram I called on all educational structures to support Armenian teachers and improve their living standards.

The second pan-diaspora conference on education organized under the auspices of the Catholicosate of Cilicia concluded its activities on Saturday, 19 July 2008.

In his concluding remarks of the conference, His Holiness Aram I, Catholicoss of Cilicia, stressed the important role of the Armenian teacher in Armenian schools, particularly in contemporary times when the number of teachers specializing in Armenological topics is on the decline. ?The Armenian School is in a crisis, which should not, however, be presented in a negative way. The highpoints of our nation?s history, our most important achievements have been the results of crises. We should have the courage to see the crisis, make the correct diagnosis and look for solutions to the problems,? he said.

Pointing to the differences that exist between Armenian schools in communities around the world, His Holiness said: ?Despite being in different conditions, we can be of use to one another through systematic work and good organization,? he stressed. Finally, highlighting the true nature of the Armenian school, the Pontiff said: ?The Armenian school is not only a collection of classrooms, textbooks; the teacher that breathes life into all this is essential. Today there is a lack of Armenian teachers everywhere. It is not only the number of students that is decreasing; the same is true for the number of Armenian teachers.? The Pontiff called on all educational structures to support Armenian teachers and improve their living standards.

Some 100 representatives from all the dioceses of the Catholicosate of Cilicia (except for the Diocese of Greece) participated in the conference in addition to the representative of the Armenian schools of Istanbul. The active participation of various educational structures and councils was noteworthy.

The final session of the conference featured wide-ranging discussions on a number of issues. Many constructive proposals were also set forth by the participants.

A dinner banquet was organized Saturday evening in honour of the participants in Bikfayya coupled with a beautiful cultural entertainment program presented by the Seminary students.

Source: Website of the Catholicosate of Cilicia
http://www.armenianorthodoxchurch.org
19 July 2008

Photo: Participants of the second day of the seminar.