The new issue, volume XIII of the Seminary yearbook ?Klatsor? has been published in Antelias on the initiative of a special editorial board formed of Seminary students working under the guidance of the administration.

Encompassing 263 pages, the yearbook is the mirror reflecting the spiritual and intellectual formation of the Seminary students. Confined to their solitude in a healthy religious and national environment in Bikfaya, Seminary students work on several projects throughout the year in addition to their day-to-day lessons: research articles, analytical writings, music compositions and other literary and artistic works.

Seminary Dean V. Rev. Shahe Panossian writes in the introduction to the volume: ?Although this volume is a beautiful collection of personal writings, ?Klatsor? is a group initiative. The writings in its express not only our students? individual aspirations and thoughts but depict a true picture of the atmosphere of creativity and religious life in the Seminary.?

The Dean presented the first copy of the new volume to His Holiness Aram I as the result of a year of fruitful work. The Pontiff highly praised the collective work, considering it the first step of the Seminary students? spiritual-intellectual formation, where the feelings of the new generation towards our nation and church are reflected.

Source: The Newsletter of the Catholicosate of Cilicia, Issue Number # 61/07, 19 June 2007
Website: www.cathcil.org

ADDITIONAL READING FROM THE SAME SOURCE

2nd annual meeting of the Seminary teachers held in Bikfaya

ANTELIAS, Lebanon – The second annual meeting of the Seminary teachers convened upon an invitation from the administration in the Seminary reading room in Bikfaya on June 16 to discuss issues related to the past academic year and review the Seminary?s academic curriculum.

The administration asked the Catholicos to address the teachers during the inauguration of the meeting to provide a guiding framework for the discussions. Following the opening prayers, the Pontiff pointed to the main areas of the Seminary?s curriculum, underlining among them the linguistic, religious and Armenology fields. Highly praising the role of teachers, the Pontiff talked about their commitment and dedication, stressing that aside from the subjects they teach, teachers are called upon to provide spiritual formation to their students.

?Spiritual-intellectual formation does not have a start and an end and it is the teachers that forms the future man, Armenian, religious leader, servant of the nation in students as a driving force behind all positive aspirations,? His Holiness said, adding that the emphasis should be put on spiritual inspiration rather than verbatim teaching from textbooks.

In consecutive sessions the teaching staff discussed the work carried out during the previous academic year and took several decisions in this respect. The explanations provided by Dean V. Rev. Shahe Panossian helped the participants have a clearer view of the educational academic curriculum planned by administration members Rev. Sipan Ketchedjian and Rev. Magar Ashkarian for adoption during the next academic year.

On this occasion all the teachers received copies of the new issue of the Seminary yearbook ?Kelatsor?, where the intellectual development of Seminary students is reflected in several articles in the religious, historical, literary, music and other fields.

The Seminary students honored their teachers with a lunch table in the vineyard of the Seminary in Bikfaya. The event marked one of the most pleasant experiences of the academic year, when students and teachers gathered together in a warm atmosphere, putting behind them the heavy burdens of the day-to-day work throughout the year. 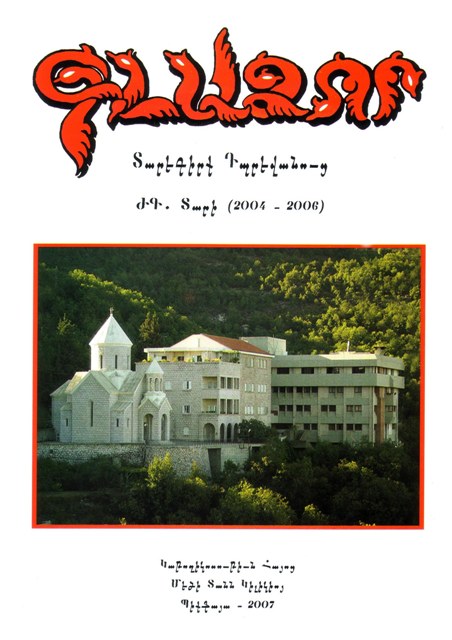