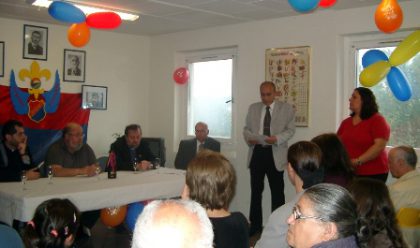 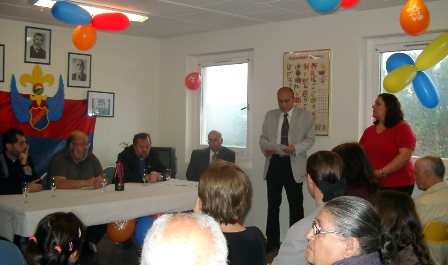 After several years of a club absence, finally Homenetmen Stockholm Chapter (Sweden) made a very vital decision by opening its club in Stockholm, Sweden. About 150 guests attended the opening ceremony including special guest of the day Hrach Maroutian, who as a faithful member of Homenetmen cut the ribbon.
?
The ceremony started with “Mer Hayrenik” anthem, followed by opening speech by Brother Hagop Mardirossian, Chairman of Homenetmen Stockholm Chapter, who emphasized the importance of Homenetmen's duty to the Armenian young generation, in order to educate them with the spirit of the humble Armenian, always ready to give his utmost for the prosperity of the Community.
?
Brother Hagop Khatcherian (Chairman of the Chapter) delivered a speech in the name of the Homenetmen Sweden Chapter and officely announced the name of the club to be dedicated to one of our contemporary “Fedayis” during the independence struggle war in Artsakh and who was killed in 1993 (Brother Shahen Meghryan). He spoke about several issues including the difficulty of our new generation in speaking our language and promised that Homenetmen would do its utmost for educating the young on national language, religion and history subjects.
?
Our special guest Brother Hrach Maroutian expressed his gratitude towards the attending members for their fantastic and hard work on creating this club, which would serve not only for them but for the whole Armenian community of Stockholm.
?
Representative of the Armenian National Committee of Scandinavia Suzanne Khardalian talked about the importance of Homenetmen in Sweden, specially for the youth, as it provides valuable opportunity to come closer and learn more about our motherland, language, culture, history and religion.
?
Father Nerseh Khalatian, Vice Vicar of the Armenian Apostolic Church of Scandinavia (accompanied with Father Norayr Gandjumian, the priest of Stockholm and Uppsala)? expressed his gratitude towards Homenetmen's faithful approach to our church and promised to contirbute extensively in this process by teaching religion to both youth and adults, thus creating a fruitful cooperation between the generations.
?
The ceremony ended by “Harach Nahadag”, followed by a reception and donations to Homenetmen Stockholm Chapter.
?
Source: Press release by Homenetmen Sweden
Contact: Hagop Khatcherian
Tel: 0046707461495
E-mail: [email protected]
? 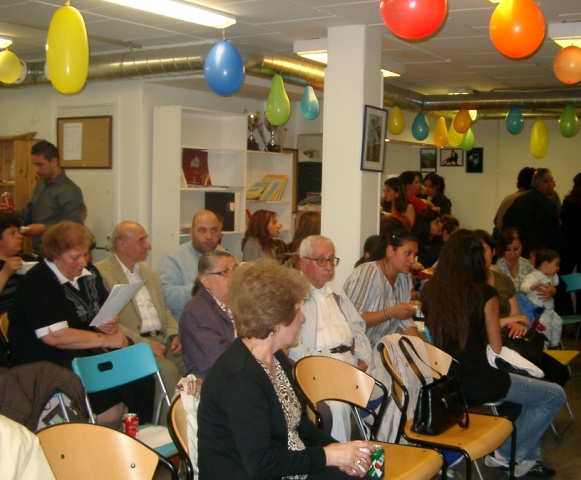