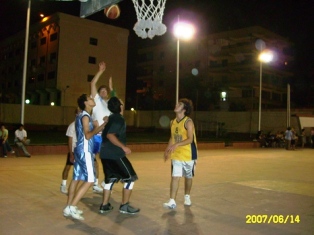 As the 4th Pan-Armenian Games to be held in Yerevan from 18 to 26 August 2007 get closer, the best Egyptian Armenian basketball players were chosen for this event forming one single team. It was decided to participate, in principle, with one basketball seniors men team uniting the best basketball players of the following clubs: HMEM Nubar Cairo and Alexandria, HMEM Ararat and HMEM Gamk clubs.

Hayg Assadourian was chosen as the team coach. The players have already been selected and trainings have started twice a week on Wednesdays and Saturdays at the HMEM Nubar Heliopolis club. The team coach is satisfied with the ongoing of the trainings: “Players are taking these sessions very seriously. I made it clear to them that we're not going for a sightseeing trip. We're going to Yerevan to play some good basketball.”

The opening Ceremony of the Games will take place in Yerevan?s “Hrazdan” Stadium on the 18th of August 2007. The Games include: football, mini-football, volleyball, basketball, tennis, table tennis, athletics, chess, swimming, and badminton.