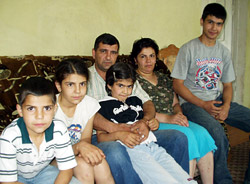 Two years ago Parsegh Hampartsoumian and his family emigrated from Iraq to Armenia. They lived for a year and a half in Yerevan's Avan district, but paying $180 a month rent was a luxury the family couldn't afford, and so they moved to Echmiadzin, where they found a place for $50 a month. They have five children, all of them in school. Sixteen-year-old Masis frequently skips school because of the language barrier, and prefers to apprentice with his father, as an electrician. Ten-year-old twins Minas and Maral do their best to excel in school, and Alis and Moris, who are in middle school, are trying with difficulty to overcome the language barrier. They believe that one day they will be as fluent in Armenian as they are in Arabic.

Fifteen-year-old Aida Bedrosian, the daughter of Parsegh's sister, whose family also emigrated to Armenia from Iraq with them, said what she liked here was the free and peaceful lifestyle. ?There, it was forbidden to go out from six at night till eight in the morning. We couldn't even sleep. When the bombings would stop, we would call our relatives to find out if they were still alive,? the girl recalled.

Her mother Arshaluys, who was visiting her brother's family, asked us to pass her complaints and condemnation along to the Armenian government, for completely ignoring Iraqi Armenians.

?My brother's family of seven and my own family of four are barely surviving. It's good that my brother got a job at VivaCell with the help of the Red Cross. He is one of the few Iraqi Armenians who has gotten a job here, and that is only because of his five children,? said Arshaluys Yeghiazaryan.

Arshaluys explained that they and other Iraqi Armenian families living in Armenia survive on the money they received from selling their homes and land in Iraq. ?But that will run out one day. I've calculated, and we spent $1,000 in five months only for the rent and various taxes. Without a job, how are we going to live? I don't know,? she said worriedly. She said that they had been to several job agencies, but were always rejected with the reply, ?There aren't enough jobs for us, and now we have to worry about you?? She couldn't remember precisely which organizations gave that reply, but she does remember that at Yerevan's 8 th Hospital she paid 6,000 drams for an X-ray, instead of 2,000. ?That's how it is if you don't have a residency passport,? they told her.

Arshaluys is not happy with the school, either. ?Every day they collect money. How can I pay them if none of us are working? But not paying is no good, either, since the children suffer.? Both Parsegh Hampartsoumian and Arshaluys Yeghiazaryan are disillusioned by Armenia. ?The Armenia that our parents talked about day and night did not live up to our expectations. We feel ignored and uncared for here. If it weren't for that damned war, we would never have left Iraq,? said Arshaluys, who is relatively fluent in Armenian.

Parsegh's wife Muna Hampartsoumian, who is Assyrian and understands only a few Armenian words, told us via her husband's sister that despite the fact that she became sick from the fear of bombs, she would happily go back, because at least in Iraq they didn't have problems with food. ?Once a month, the Iraqi government would distribute free flour, sugar, cooking oil and soap. Plus we had jobs. And here only the UN helps, and they give us so little food that it's not enough to last us till the end of the month, ? Muna said. According to her, the UN will continue supporting her because of her five children, but for people with smaller families, assistance will be given only once a year.

They are upset now, too, but for another reason?they want to go back. ?A person dies once. If we have to die of hunger in our homeland, it would be better to die in Iraq in an explosion,? said Arshaluys. Her brother Parsegh, who after work receives rare orders to repair electric appliances, wants to go to Europe instead of Iraq.

?If we had money, we could go to Syria. We could buy a Shengen visa there and move to Europe. It's true, Armenia is the best country in the world, but we can't live here, and also, people treat us like foreigners, ? Parsegh said.

Related Azad-Hye.net coverage:
Living in a dangerous place
Fleeing violence from U.S.- caused war in Iraq, refugees find their way to Glendale
Life under threat in present-day Iraq
They lost their last hope for freedom

Newer PostDr. Henry Astarjian recounts past as both a child and prisoner of Iraq
Older PostUnited basketball team to play in Yerevan