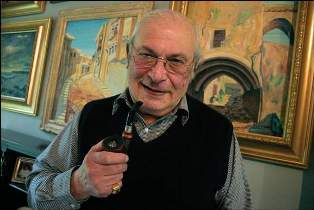 Dr. Henry Astarjian has a unique perspective on the war in Iraq and the tensions in the Middle East.

He?s not only an Iraqi native; he also knew some of the major players in the Iraqi government before the reign of Saddam Hussein.

It?s what he knew that prompted him to leave the country more than 40 years ago.

The 73-year-old Hollis resident?s first book, ?The Struggle for Kirkuk: The Rise of Hussein, Oil, and the Death of Tolerance in Iraq,? hit bookstores this month.

The book details Astarjian?s life in Iraq from a boy living in Kirkuk to his arrest, torture and imprisonment in a military prison by a childhood friend.

Astarjian?s book is a mix of his life story in Iraq and the political events and ethnic tensions during that time, but only as he experienced them.

Astarjian, who is now a neurologist for the Massachusetts?s Department of Disability Services, said he wrote the book to educate more Americans about the country the U.S. military is fighting in and why he believes democracy will never take hold there.

?I thought American people should know the area and the people we have invaded in the name of bringing democracy and freedom,? he said.

Astarjian?s parents survived the Armenian genocide in 1915 and relocated to Kirkuk ? one of the three principal cities in Iraq along with Baghdad and Basra. Astarjian said he isn?t Arab but rather an Armenian Christian.

He lived in Kirkuk until 1952 when he left for medical school in Baghdad.

Growing up he attended lunches with his school friends, including Adnaan Azzawi, who were budding communists despite the royal regime that ruled Iraq at that time.

By the time he moved to Baghdad in 1952 to attend the Royal College of Medicine, he was known as an outspoken anti-communist, a label that would prove problematic when the Royal family was overthrown by communist sympathizer Abdul-Kareem Qasim in 1958.

?I was an anti-communist. I was an outspoken guy,? Astarjian said. ?I always have been, and I have paid the price.?

Astarjian was an eyewitness to the revolt on the morning of July 14 that year. He describes vividly the ?decrees? broadcast on the radio and the mood of the mobs as they dragged and desecrated the bodies of their former rulers.

After college, Astarjian was stationed near the Iranian border to complete the required one-year term in the army as a medical officer. It was there that Astarjian was taken into custody by members of the communist party and accused on smuggling guns from Iran to support an uprising in Mosul.

When he was dragged into the room where the ?torture party? was to be held, Azzawi was there. According to Astarjian, his childhood friend from Kirkuk didn?t help torture him, but he didn?t stop the ?party? either.

Astarjian refused to confess to smuggling weapons across the Iranian border. He continued to refuse even when he was tied down and the soles of his feet were beaten with wooden dowels, and his face and torso were punched and kicked.

But he did give in when his torturers threatened to kidnap his sister and rape her in front of him.

After he signed the confession, he was transferred to Rasheed Military Base in Baghdad.

It was in the military prison that Astarjian met some of the future leaders of Iraq ? the ones who convinced him he needed to find a new life in the West. They were his cellmates. He shared a cell with men including Jameel Sabri Al-Bayaati, Abdul-Azeez Al Uqayli and Abdul Ghani Al-Raawi.

?Knowing them individually, I didn?t think these were the proper people to create a peaceful and modern Iraq,? he said. ?I didn?t see a future there.?

When those men helped lead a counter-revolt against Qasim in 1963, he knew it was time to leave the country.

Astarjian said he hasn?t looked back and has committed to being an American.

?What brought me to this country was a bill of rights,? he said. ?You pledge allegiance to your new country and that?s that. I don?t look back, but one does remember. There were good things before all these revolutions. Life was good.?

Astarjian?s family left Iraq shortly after he did, and he hasn?t been back. He said he would like to visit his birthplace someday, though.

Astarjian, who has been a legal citizen since 1970, said he doesn?t believe democracy will succeed in Iraq because of its tribal roots. The tribal mores that dominate the rural areas of the country call for ?one person who is the boss,? he said.

?We are cheating ourselves and the government is cheating us, the American people, in the reason we went: to spread democracy,? he said. ?That is a deception.?

PSI is the newest branch of Greenwood Publishing Group and specializes in material on international security, according to the company Web site.

Joe G. Cote can be reached at [email protected].

Photo: Dr. Henry Astarjian, an Iraqi native and the author of a new book titled ?The Struggle for Kirkuk: The Rise of Hussein, Oil, and the Death of Tolerance in Iraq,? stands in his Hollis home 5 June 2007 (Nashua Telegraph Staff photo by Emily Berl).

Newer PostClarissa Payne: The whole event just seemed like a logical thing to do
Older PostIraqi Armenians are disillusioned