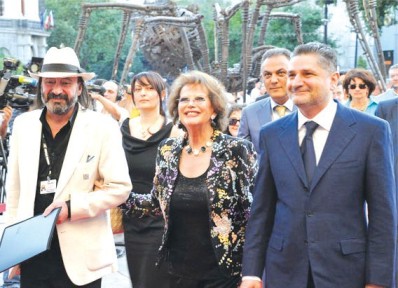 It is only after painful efforts that Armenia, a land of ancient culture, and the young muse of Cinematography, finally met.

In the early 20th century, the attempts of individual Armenian artists to reflect their ideas and hopes on the screen were all in vain. The Armenian land has long been tormented by mortal blows from fighting empires. Although it finally became a suitable site for foreign camerateams, it could not become a nourishing ground for local film production until the formation of the statehood and peace, which made the emergence of national cinematography possible.

Given the current favourable conditions, the Armenian cinema industry after producing over two thousand feature, animation and documentary films in the last century, made the local and international audience happy with the establishment of the annual Golden Apricot International Film Festival (GAIFF) in 2004.

This year, the 7th GAIFF launched in the Armenian capital Yerevan giving a rare opportunity for the country?s film critics and movie buffs to sample some of world cinema?s latest offerings. The weeklong grand occasion opened on 11 July with a gala ceremony attended by several star guests, including renowned Italian actress Claudia Cardinale. The Prime Minister, Minister of Culture and the Mayor of Yerevan were present at the tribute event to the iconic actress in the first day. The festival chairman Atom Egoyan and his wife, Canadian actress Arsin? Khandjian, were also present during the opening ceremony.

Among the notable guests of the 7th Golden Apricot Festival was Allen Hughes, the American film director, producer and screenwriter, who, together with his brother Albert Hughes, presented the film ?The Book of Eli?. French actor and director Serge Avedikian, who won the Best Short Film Prize
at Cannes with his film ?Barking Island? two months ago, was also in attendance. Lee Chang-Dong, who was honored with Best Screenplay at the Festival de Cannes this year, was another participant in the Golden Apricot.

?This is not one of the biggest film festivals yet, but one of the most friendly and intimate for sure. A film festival means where film makers and the audience communicate directly and easily, and this is exactly what we have here in the Golden Apricot,? said the famous South Korean director.

In an interview with Baladna, Golden Apricot Festival general director Haroutyun Khachatryan stated that ?we had several major achievements this year and the most important of them is that the best artists of cinema language in the world acknowledged Yerevan as a new capital for cinema culture and we could finally emerge as an international center on the world cinema map.?

For the past two years, the ?Arabian Nights? screening program was conducted within the framework of Golden Apricot, providing a perfect opportunity not only for cultural exchange of expertise, but also for partnership and cooperation between filmmakers of Armenia and the Arab world.

The initial ?Arabian Nights? was a resounding success, and quickly established itself as one of the premier cultural events of the region. Films of Arab artists with international success like ?Paradise Now?, ?Falling From Earth? and ?Caramel? were featured in last year?s Golden Apricot, as well as series of Emirati films entitled ?The Emirati Nights?. However, several films participating from the Middle East covered the absence of the Arabian Nights this year, such as ?The Fifth Column? from Lebanon, and ?A Beautiful Snowy Day? from Iran.

This year?s groundbreaking achievement was the Armenia-Turkey Cinema Platform (ATCP) initiated by the Golden Apricot with the cooperation of Anadolu K?lt?r, a nongovernmental organisation from Turkey, aiming the establishment of a common network through which filmmakers from both countries may become able to cooperate and produce films together.

The formal establishment of ATCP was announced in April 2009 during the “Meetings On The Bridge” program at the 28th Istanbul International Film Festival. But cooperation and exchange between film makers from Armenia and Turkey started earlier than that. Since 2004, over 25 films from Turkey have been screened at the Golden Apricot. In 2006, Yesim Ustaoglu, who participated with his film ?Waiting For The Clouds? a year before that, was in the Jury of Golden Apricot?s International Feature Film Competition programme. In 2009, ?Autumn? by ?zcan Alper, won the competition?s Silver Prize.

On the final day of this year?s festival, ?Kosmos? by Reha Erdem from Turkey has won the Best Feature Film Prize. The coveted Golden Apricot was
handed to Cigdem Mater, Anadolu K?lt?r Advisor and ATCP program management coordinator, on behalf of the director.

?First, I have to say that I am extremely happy with the results of 7th edition of Golden Apricot Film Festival. Not only because the Golden Apricot
went to Reha Erdem?s extraordinary work ?Kosmos?, but also [because] more than 20 participants from Turkey?s film industry had the chance to visit Yerevan, to meet with Armenian filmmakers both from Armenia and the Diaspora, and they had the chance to talk about possible future projects,? said Cigdem Mater.

?As the the coordinator of ATCP from the Turkish part, we aim to do movies by co-production with the two countries. It is a real pleasure to announce that by the beginning of May 2011, we will be able to watch five short films by filmmakers from Armenia and Turkey,? she told Baladna.

?I believe that maybe not the politicians, but arts and culture have the power to open the borders and they already did,? she added. 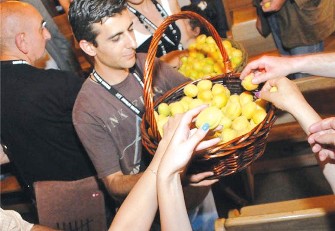 Last year, Golden Apricot general director and film director Haroutyun Khatchatryan won the Grand Prize of Antalya International Film Festival in
Turkey with his film ?Border?. Golden Apricot Festival art director Susanna Haroutyunian stated that ?The Golden Apricot jury team, which is composed of artists from various nationalities, had very objective discussions before their decision. Although this is not about reciprocal moves or gestures
by both sides, it helps bring people of both countries together.?

Turkish director, producer, screenwriter and cinematographer Semih Kaplanoglu, who presented ?Honey?, the last film of his trilogy at the 7th Golden Apricot Festival mentioned that ?walking in the streets of Yerevan feels like home.? Kaplanoglu, who was in Golden Apricot International Feature Film
Competition Jury this year, is also convinced that festivals make it possible to study, understand and find solutions to the problems between the nations. ?I wish the films could change the world,? he said.

Within the framework of the 7th Golden Apricot Festival, Fatih Akın, the famous German filmmaker of Turkish origin, was in Armenia for the first time to present his new film ?Soul Kitchen?, as well as to be present at the retrospective screenings of his previous films. ?At first sight Yerevan is a very hospitable, modest city with a magical meaning?, said Akın. ?Armenia is the most oriental country I?ve ever visited. I am very much interested in Armenia with many expectations, and my conviction is that I will enjoy my visit, since I am planning to spend most of my time in the city and not in the cinemas.?

Akın is convinced that film is the best form of intercultural communication. ?All my films were an attempt to understand Turkey. Yet, I would say that I am not thinking and acting based on my national identity, since I consider that to be chauvinism. Any director should be able to pull down the borders and overcome the barriers. If not possible, better build a bridge?.

Armenia and Turkey have no diplomatic relations since the independence of Armenia from the Soviet Union. In 1993, Turkey closed its borders with Armenia, after the independence of the Armenian enclave of Nagorni Karabakh from Azerbaijan, an ex-Soviet country with close ties to Turkey.

1) Celebrated Italian actress Claudia Cardinale makes her entrance on the red carpet to the GAIFF on its opening night.

2) A festival staff member hands out the symbolic gold apricots after a blessing ceremony at St. Zoravor Church in Yerevan.

See the article as appeared in Baladna (2 pages):