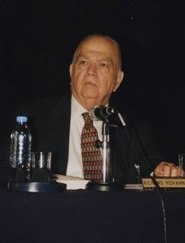 By Dr. Nelida Boulgourdjian-Tufekjian
?
Professor Richard Hovannisian was in Buenos Aires, Argentina, from 20 to 25 November 2007 to participate in an international conference on genocide and to give a public lecture to the Armenian community.
?
The conference was organized by the Universidad Nacional de Tres de Febrero (UNTREF) on the social aspects of genocide. Invited as a distinguished speaker during the plenary session, Dr. Hovannisian focused on the social and economic causes and consequences of the Armenian Genocide. During his presentation, he noted the progress in the study of the Armenian Genocide since his first publication on the subject, The Armenian Genocide in Perspective, an outgrowth of a conference held in Tel Aviv in 1982, which the Turkish government tried to prevent in many ways, including political blackmail. The authors in that volume were mostly Armenian, whereas in the subsequent volumes edited and published by Richard Hovannisian, there has been an increasing number of non-Armenian scholars, and the contents have shifted from primarily description of the genocidal process to analysis and interpretation. For example, his fifth volume on the subject, The Armenian Genocide: Cultural and Ethical Legacies (released in November 2007), includes chapters on art, music, cinema, philosophy, literature, and even an essay on historiography by a Turkish scholar. A positive development is that a growing number of post-nationalist Turkish writers feel the need to confront their history, delving into difficult subjects such as the treatment of the native Armenian population in the Ottoman Empire.
?
During his presentation, Dr. Hovannisian noted that other participants spoke of events that had occurred during their lifetime (Argentine under the military dictatorship; the Balkan conflict and Bosnian massacres; Guatemala; the Holocaust) and therefore spoke with deep feeling, but he explained that the trauma and emotions connected with genocide do not stop with the immediate victims; rather, they are passed down through subsequent generations as in the case of the Armenian Genocide. This trauma is compounded by denial or self-imposed amnesia as manifested for decades by Western governments that had failed to fulfill their pledges regarding the punishment of the perpetrators and rehabilitation of the survivors.
?
Professor Hovannisian reflected on the endeavors to gain worldwide recognition of the Armenian Genocide, recent developments in the United States Congress, and continued efforts of the perpetrator side and deniers to suppress both truth and memory. He also drew attention to popular misconceptions about tolerance in the Ottoman Empire, as the structure of the Ottoman ruling system was based on institutionalized inequality and second-class citizenship. This was reflected both in official and unofficial ways, including collective popular prejudice and aspersions directed toward the Armenian Christian population. Armenian attempts to achieve equality were perceived as a threat to traditional society and therefore as treachery that had to be punished, as demonstrated during the reign of Sultan Abdul Hamid II.
?
The policies initiated by the Young Turks after 1908 can be seen as a case of social engineering. Their perception was that the greatest threat to the creation of a Turkish nation-state and eastward expansion was the existence of a large Armenian population still living in their historic homeland. The Turkish rulers resolved to eliminate this major obstacle and ultimately all non-Muslims such as the Yezidis, Assyrians, and Greeks and at the same time to Turkify all non-Turkish Muslim elements such as the Laz and Kurds. These policies continued during the Kemalist era, as Alawis of the Dersim region and elsewhere were massacred and suppressed. The Turkish government?s social engineering continues to this day throughout the Kurdish-populated regions of the country.
?
Dr. Hovannisian also referred to the economic aspects of genocide that entail the transfer of enormous personal and collective wealth from the victim group to the perpetrator side. The Young Turks were determined to create a Muslim bourgeoisie at the expense of Greek, Armenian, and Jewish traders and merchants. Once again this policy was continued into the Republican period in the discriminatory economic policies imposed on the minority elements, especially during World War II.
Consequently, the Armenian Genocide may be considered a prototype of the evolution of modern ultra-nationalistic regimes, particularly those driven by an ideology that can rationalize or justify the use of extreme violence in order to defend against a real or imagined enemy or can facilitate the implementation of xenophobic agendas. The conference participants and audience expressed their strong appreciation of Hovannisian?s presentation.
?
Professor Richard Hovannisian?s second lecture was organized by the Free Chair of Armenian Studies at the Faculty of Philosophy and Letters of the University of Buenos Aires and the Armenian Center (Centro Armenio) and held in the Tekeyan Cultural Center. Before an overflow audience, Hovannisian spoke in Armenian about the current situation of Turkey?s Armenian provinces, which he recently visited with his wife, Dr. Vartiter Kotcholosian Hovannisian, who also attended the Buenos Aires conference. He presented a realistic picture of the conditions in these areas and their inhabitants and the pitiful state of neglect and destruction of the marvelous monuments of Armenian architecture, either because of neglect or by malicious acts at the hand of man.
?
During their visit to Argentina, Richard and Vartiter Hovannisian, together with other conference participants, were honored at a reception hosted in the Armenian Embassy by Ambassador and Mrs. Vladimir Karmirshalyan.
?
Press Release: December 19, 2007
Contact: N?lida Boulgourdjian
Email