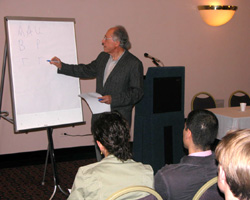 By Jake Goshert, Department of Communications, Diocese of the Armenian Church of (Eastern)

As designs, they're intricate and nuanced. In the hands of artists, each one is a masterpiece.

On November 1, 2006, the in hosted a lecture by three experts who spoke about the evolution of the Armenian alphabet and the enduring beauty of those centuries-old characters. It was part of the on-going celebration of the 1,600th anniversary of the creation of the alphabet by Mesrob Mashdots.

REALITY OF THE MYTH

“There is sufficient mythology making us believe the letters appeared in a vision and were literally outlined by the hand of God,” said Dr. Abraham Terian, professor of Armenian patristics and academic dean of St. Nersess Armenian Seminary in New Rochelle, NY, one of the evening's three speakers. “But this is pure myth.”

Dr. Terian outlined the story of Mashdots as told by Koriun, a historian writing shortly after the invention of the alphabet. Dr. Terian recently completed a new English translation of Koriun's biography.

He said Mashdots did in fact have a leading part in the creation of the alphabet. But the letters came about through study of letter design and hard work, rather than a grand vision from God, according to Koriun's history, Dr. Terian said.

“In the history it says that 'as he begot the Armenian alphabet we called him father,'” Dr. Terian said, relaying the story from his recent translation. “So it was not a divine hand but it was Mesrob Mashdots' own hand writing — begetting — the letters.”

The story relates that to create the alphabet, Mashdots traveled to a Greek-speaking region and once he came up with his draft letters he worked with a Greek calligrapher to fine-tune the designs. Terian outlined some of the similarities between the Greek and Armenian script. The finished alphabet, he said, was a culmination of a decade of work and several design models.

“He must have been working very hard to come up with an Armenian alphabet, perhaps to fulfill an evangelical endeavor,” he said, noting that the goal of the project was to create an alphabet to allow for the spread of Christianity to the masses.

“When Mesrob Mashdots was thinking about evangelizing his people, he was following in the footsteps of St. Gregory,” Dr. Terian added. “Mashdots was realizing the people of the were in darkness. He was persuaded these people could not be fully Christianized unless they received the message in their own language.”

Along with working on the Armenian alphabet, Dr. Terian pointed out that he is also credited with creating the Georgian script and the alphabet of the Caucasian Albanians, who lived in present day . All three alphabets were an attempt to evangelize.

Mashdot's designs have withstood time, Dr. Terian said. They have changed little over the centuries and remain very similar today to the original designs.

BEAUTY OF THE SHAPE

Along with providing an outlet for language, the letters are also beautiful designs. Speaking at the lecture, which was organized by the Krikor and of the Diocese of the Armenian Church of America (Eastern), was an English designer, Carolyn Puzzovio, who has been inspired by the Armenian alphabet.

A lecturer at the of in the , Puzzovio's background is in graphic design and her major interest within the subject has been lettering and type design. She has been studying the Armenian alphabet, creating Armenian fonts, and using the letters in her artistic work.

“This is a culturally important alphabet,” she told the 45 people gathered at the for the lecture. “The alphabet was vitally important as it is really culturally specific to the Armenian people that allowed them to grow and flourish.”

The Armenian Ministry of Culture invited Puzzovio to hold a one-woman exhibition of her work at the Armenian National Gallery in October 2005. She returned to this fall as part of a British government-funded research project to design/revive traditional Armenian typefaces for digital settings which also have Latin characters for dual-alphabet use.

“The idea is to design characters that harmonize well. It is not an easy task,” she said, as she shared historic and modern examples of Armenian lettering with the audience.

Examples of her work were showcased throughout the week at the Diocese and in her talk she used photos from her trip to to illuminate her discussion on the forms used in the alphabet. She especially noted the expansive use of carved letters in stone in .

“I wonder if the permanent rendition of letters carved in stone is a deep-rooted effort to leave a lasting legacy of the Armenian language,” said Puzzovio, who traveled to at her own expense specifically for the lecture at the Diocese. “This is a fascinating alphabet which has left an amazing legacy for all of us.”

Rounding out the trio of speakers that evening was Peter Bain, a designer who spoke about the use of typography in design and how various Armenian fonts achieved different design goals.

Bain, principal of Incipit, a Brooklyn-based design studio, spoke about the connection between lettering, layout, and page design and how they all tie together to tell a cohesive story.

“Typeface design is taking a series of letters and creating a cohesive set,” he said, outlining ways the Armenian letters were designed to make them appealing and readable.

Source: Website of the Diocese of the Armenian Church of (Eastern)

Photo: Dr. Abraham Terian, professor of Armenian patristics and academic dean of St. Nersess Armenian Seminary in , , outlines the similarities between Greek and Armenian during a lecture on the creation of the Armenian alphabet, organized by the Diocese's on November 1, 2006.