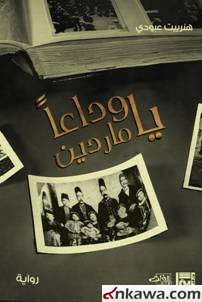 An interview with novelist Henriette Aboudi about her latest novel “Farewell Mardin“, written in Arabic.

The novel is about Seyfo (the Genocide of Syriac, Assyrian and Chaldean population in the Ottoman Empire during WWI), which coincided with the Armenian Genocide.

Due to the importance of the subject to the Armenians we addressed author Henriette Aboudi and asked her about her book.

The Swedish parliament has already recognized the Armenian genocide and mentioned the Assyrian genocide in the known pronouncement. The publishing of your novel coincides with a time when there?s a growing interest in the fate of the nations that were part of the Ottoman Empire before the Genocide of 1915-1918. Will reading the novel help understand what had happened from both a historical and a political perspective?

The purpose behind this novel is to further clarify the events. It gives a chronological order of the events through real characters such as some of my family members who witnessed the atrocities. For example, the scene about Bishop Maloyian?s brutal killing with many other Armenians is taken from history books, while the one where my uncle and his pregnant wife were murdered and their son was kidnapped is taken from my family memoirs. My cousin was later recovered by my family – thanks to the mediation of Cardinal Tabuni – who later became one of Aleppo?s prominent writers.

Why is it that the Assyrian massacres do not grab the same attention like the Armenian genocide? Is it simply negligence by your own people or do you blame the international circumstances?

I do not have one answer to this question. Assyrians in fact did not speak of the persecution they incurred in the last days of the Ottoman Empire with the same determination as the Armenians had. Why? The reason could be because Assyrians, unlike the Armenians, do not have an independent country of their own. There?s also the language factor. For the Assyrians, the first language has always been the Arabic albeit a small number still speaks the old language. By many this language is considered as religious rather than a national one. Just like the Maronites in Lebanon, the Assyrians do not use their language any more, except for the rituals.

There are of course calls to revive the Assyrian nationality but they are seen as reactions to the rise of the religious wave in the region, which was seen in Iraq as bloody conflict between the followers of the same religion and between Islamic extremists and Christians. This is not far from nationalistic struggles between Arabs, Kurds and Turks in the region which could be extended to Turkey and Syria.

Some authors have told details of massacre from personal perspective. Are there any events in the novel that you have personally witnessed?

Both my parents were displaced from Mardin, also most of my relatives. Some still live in my hometown Aleppo, and some have moved to Lebanon or migrated to America or Canada. There are many who have been captivated or killed. To all of these I owe my existence and there is no mission more important than reviving their memory through my novel, especially that their tragedy has been silenced for a long time. Isn?t it unfair that the thousands of innocent victims who have been killed in a moment of insanity in history can find no one to mourn them and tell the story of their tragedy?

I have written this novel driven by the spirit of tolerance that I learned from my mother. My mother, who suffered like everyone else but then she forgave.

Would you like to have your book translated into other languages?

Definitely, every novelist likes to be read in other languages. Translating this book will help introducing the Assyrian tragedy to the public opinion which gives further consolation to those who were displaced, captivated or killed, simply because they represented “the other” or “the different one”, from the viewpoint of their persecutors.

We should not forget that what helps victims most and leads them to the stage of forgiveness is the confession of the crimes by the murderers.