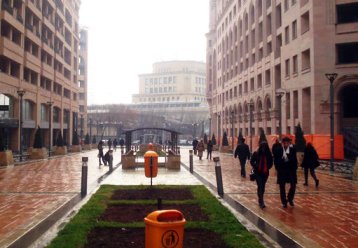 Critics say laws may look good but monopoly grip on some sectors remains a problem.

Armenia has edged upwards in this year?s ranking for business freedom around the world produced by the Heritage Foundation, a think-tank in the United States. Opposition figures in Yerevan, however, said the assessment overlooked the real difficulties faced by entrepreneurs.

The 2011 Index of Economic Freedom put Armenia in 36th place on a list of 183 countries ordered by the ease of doing business. Up one place from last year?s report, Armenia was just behind South Korea and ahead of European Union members like Hungary or Slovakia.

Opposition figures like former prime minister Hrant Bagratyan, however, said the report failed to take into account the fact that while the country?s laws looked good on paper, they were not enforced.

?The situation with economic freedom in Armenia can be divided into the formal and the real,? he said. ?For example, everyone in Armenia has the right to import goods freely, but only one person has the right to import sugar, while another ships in all the grain and flour. In reality, the market has been divided up?. Although we must acknowledge that the economic sector in Armenia was initially free, in recent years we have constantly been backsliding.?

The Index, which is published jointly by the Heritage Foundation and the Wall Street Journal, pointed out that Armenia has a lot still to do before the economy can be described as truly free, but nonetheless praised the advances it had made.

?Despite the economic slowdown in recent years, a macroeconomic policy environment supported by low taxes and stable government spending has promoted steady economic growth. The regulatory framework is sound, and an open trade regime with low tariffs facilitates the free flow of goods,? it said.

On the negative side, it said, ?Corruption is perceived as widespread and even pervasive. Demands for bribes by government officials are routine. Government-connected businesses hold monopolies on the importation of numerous vital products.?

Businessmen agreed that some certain sectors were controlled by monopolies, particularly involved in food imports, but argued that there was still scope for competition.

?Armenia?s economy is divided up between a few oligarchs. Imports of some goods are monopolised, and there is little freedom there. However, there are areas where freedom exists. For example, there is full competition when it comes to imports of diesel fuel, although you can?t say the same of sugar,? Vazgen Safaryan, head of the Union of National Producers, said.

Deputy Finance Minister Vardan Aramyan agreed that the government still had work to do.

?In the main, in terms of economic fundamentals and the law, the Armenian economy is pretty liberal,? Aramyan said, pointing out that rules requiring businesses to obtain licenses before operating were relaxed last year.

?I think that the measures the government has taken are enough to ensure economic freedom, but we still have a lot to do,? he said. ?Of course one can?t say we?ve done enough; there are many tasks still to do, for example with regard to tax and customs administration. The system will be simplified and become clearer, and the administrative procedures will improve gradually.?

Bagratyan expressed doubt that such measures would work as long as the current government was in power.

?At one time, we took the right steps to attract capital and develop the country. But since we?ve had the wrong political system and an Asiatic style of government, 80 per cent of that work has been neutralised and destroyed,? he said.

The US-based rights watchdog Freedom House categorises Armenia as ?partly free? in this year?s Freedom in the World ranking, as it has done since 2002.

?Armenia retains its low rating, and in the last year we have not noticed any significant improvements or moves,? Christopher Walker, director of studies at Freedom House, said in an interview with Radio Free Europe/Radio Liberty.

*Armen Poghosyan is a freelance journalist in Armenia.