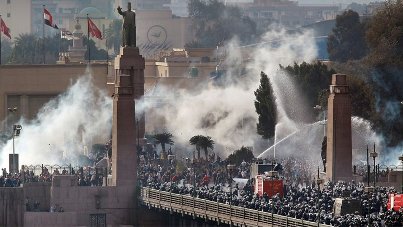 Egyptian Armenians will start going to their work tomorrow (Sunday, 06 February 2011) as the curfew was adjusted to 6pm instead of 3pm enforced during the demonstrations last week.

Roubina Aslanian from Cairo said to Azad-Hye that she is “somehow optimistic that a new and better era will start in Egypt with a better look to the future”.

Like the majority of the population, the Egyptian Armenians were staying at their home during the curfew. ?In the morning were trying to buy our daily stuff and the youth were taking part in protection efforts in the evening?, Aslanian said. According to her the streets are now safer than before and the protesters are concentrated only in Tahrir square and Mohandseen.

To give an idea about their life in the past few days Hrant Vartzbedian from Alexandria said to Azad-Hye: ?We have been protecting our homes throughout the day pushing back hordes of thieves using hunting rifles and some home made weapons?. He has urged his friends and other families to meet in the church tomorrow morning to see each other after a separation of ten days.

Ohan Janikian, an Egyptian Armenian blogger, believes that the activities taken place in Egypt against the ruling regime might eventually fail, because “the demonstrators trusted the army, which in fact is the regime itself”. The situation can create further frustration and “many more might be pushed one step closer to extremism”, he says.

Nektar Harutyunian a Republic of Armenia citizen who lives and works in Egypt and corresponds for the local Armaveni website said that the Embassy of Armenia has made an effort to register the Armenian citizens and holders of dual citizenship with the intention of arranging a get away flight to Armenia if needed, but “after two days we understood that there would be no flight to Armenia. Thanks God that nothing happened to us and we are all safe, but things could have developed into different direction”.

In an interview with local Armenian website Armaveni, Bishop Ashot Mnatsakanyan, the Primate of the Armenian Apostolic Church of Egypt said that three shops belonging to Armenians were looted during the demonstrations. There were no human casualties.

Ambassador Armen Melkonian admitted to Armaveni reporter that he did not expect such a dramatic and extensive downturn of events in Egypt. He said that the Embassy faced difficulty in preparing the list of citizens of Armenia living in Egypt because the majority of them did not maintain previous registration with the Embassy. “In the past Armenian law required citizens staying abroad to register at the Embassy but this is not valid any more”.

The Embassy however managed to compile a comprehensive list of citizens of Armenia and holders of dual citizenship. The total number was 100. The five Armenian students of the exchange program of University of Cairo are currently staying in the Embassy premises until the situation gets better.

In Yerevan about 20 people demonstrated on 04 February 2011 in front of the Egyptian Embassy (see below photo). They held placards saying “Struggle, struggle till the end”, “Go Mubarak”.

Demonstrations in Egypt are continuing since 25 January 2011 against the 83 years old President Hosni Mubarak, the ruler of Egypt since 1981. More than 400 people are reported death according to UN figures. 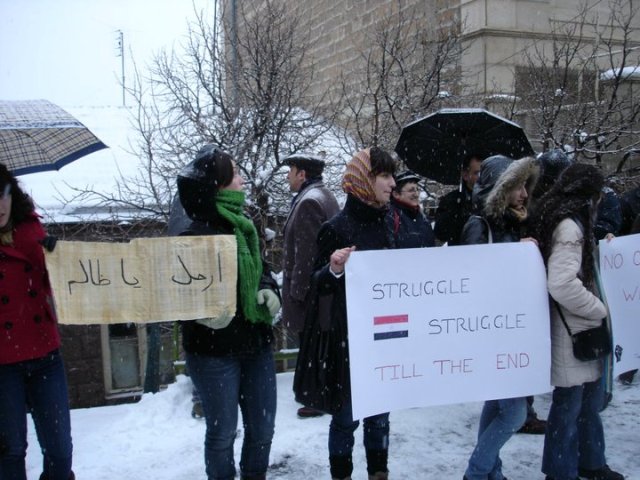