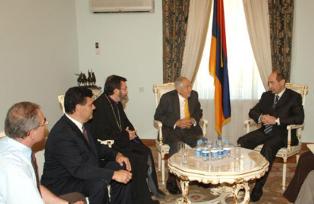 “The emergence of a climate of confidence among the public of Armenia and Azerbaijan will be a good contribution to the settlement of the Karabakh conflict,” Armenian president Robert Kocharian said after meeting the delegation in Yerevan on 28 June 2007.

Azeri president Ilham Aliyev echoed similar sentiments later the same day when the group, made up of scientists and cultural figures, visited Baku.

The Organization for Security and Cooperation in Europe (OSCE) has organized cross border trips for journalists from Azerbaijan and Armenia and is trying to broker a permanent peace deal.

Armenian Foreign Minister Vartan Oskanian told ITAR-TASS News Agency on 29 June 2007 he hailed the trip by a group of Armenian and Azerbaijan intellectuals to Stepanakert, Yerevan and Baku. “Trust should be restored by all means. Otherwise it will be difficult to make a compromise decision. In this sense it is a very positive development intellectuals from Armenia and Azerbaijan at the initiative of Armenian and Azerbaijani ambassadors in Moscow have gathered together and decided to make this trip,” he said, specially noting the fact that both ambassadors (Armen Smbatian and Polad Bulbuloglu) were former culture ministers.

According to Azeri Press Agency ambassador Bulbuloglu will again meet with his Armenian counterpart on returning to Moscow. “We plan to organize more productive and long-lasting mutual visits between the two countries,” he declared.

Excerpts from an interview with Kamal Abdulla by “Azeri Press Agency”, 29 June 2007

Kamal Abdulla is the Rector of Baku Slavic University, corresponding member of Azerbaijan National Academy of Sciences and one of the intellectuals who took part in this trip.

How did you meet the proposal on visiting Karabakh?
It was unexpected for me. Azerbaijani ambassador to Russia Polad Bulbuloglu offered this to me. The nobleness of the mission made me believe in the importance of the visit and I agreed to. The aim was that a group of Azerbaijani and Armenian intellectuals would visit Nagorno Karabakh, Shusha and Yerevan, watch the state of Azerbaijani and Armenian monuments, at the same time Armenian intellectuals would watch the state of the Armenian monuments in Azerbaijan. There were impressions in both countries that all monuments were destroyed. We had no idea what Shusha is like. We witnessed the situation, Karabakh reality. I was trying to look at Karabakh from the eyes of Azerbaijanis deported from there many years ago.

What was Shusha like?
There was no sign of life in Shusha. There are ruinous houses, remains of cultural monuments. Only four walls of our mosque in Shusha remain. There are stones in front it, as though it will be repaired. One of the places we visited in Shusha was the memorial house of Polad Bulbuloglu's father, the great singer Bulbul. Only four walls remained from the house. Bulbul's bust was covered with bullet holes. It was unrecognizable. I can not explain firing on a cultural monument. Let Armenians explain it. They planned our route. We wanted to see Jidir plane, they refused to take us there. They said the roads are in bad conditions.

What was the aim of your visit?
This problem will one day be solved, either peacefully, or in other way. We are obliged to be Armenia's neighbor after the problem is solved. This is our fate. We had pacific times and war period. How will these two nations live after the problem is solved? Will we be able to live with Armenians? We paid this visit to find answers to these questions.

How did Armenians meet you?
Very well. May be there were dissatisfied people. But the visit was accompanied by positive people. Our delegation was composed of Azerbaijani ambassador to Russia Polad Bulbuolglu, rector of Baku Music Academy Farhad Badalbayli, chief of Theater Figures Union Azerpasha Nematov and famous engineer-architect Ilhami Fataliyev. Ilhamli Fataliyev once chaired the reconstruction of cultural monuments in Shusha. A lot of Armenians there recognized and greeted him.

Are there contact points with the Armenians?
I think yes, because our countries are neighbors. Nagorno Karabakh conflict will be solved sooner or later. I think that mutual visits will help to the solution of the conflict. After passing contact line we met Armenian side without mediators and talked. There was no any mediator, OSCE mediators or Russian representatives there. We sat and talked.

What did you discuss while meeting with Gukasyan and Kocharyan?
No political issues were discussed. We were searching for the common point, not for principal issues. There was no any arguing discussion. We were trying to check common points whether we could seat nearby and talk or not.

Did you touch on the issue regarding our monuments in Karabakh which are in critical condition at your meeting with Gukasian?
Of course, we did. We even proposed that our specialists participate in the restoration of our monuments together with Armenian ones. The symbolic aspect of the issue is that the warring parties are jointly involved in removing the aftermath of the war. So, why not those who destructed the Shusha mosque restore it together with those intending to rebuild it? Our proposal was met normally. Anyway, they came to realize our serious intention.

What about the Armenian visitors? What did they visit in Baku?
We took them to Armenian church. They witnessed a clean, tidy church. The Armenian visitors also viewed the rich library of the church where a lot of Armenian books are kept. The church is not operating, but it is in normal condition. This is our attitude to God's house. This antidote is sourced from our culture.

Will you further continue making such visits?
Well, it is difficult to say. It depends on the development of political processes.

The visitors were received by Azerbaijani President Ilham Aliyev. What was on focus at the meeting?
The President received the mission and underlined the importance of that. The societies should be prepared to possible political decisions. We are to find out whether the hostility will last for many years, for centuries or we can live together in a peaceful atmosphere. There are some who think the hostility will last forever. We wanted to monitor the real situation and looked into their eyes. The door has opened… I hope it will be followed by political decisions soon. The Armenian side witnessed how decisive is the Azerbaijani president in his position. I would say this visit woke them up from euphoria.

What is the living condition is Armenia? What impressions did Armenians got from Baku?
I think we passed central streets of Yerevan. We saw two or three new constructions. And what did the Armenians see in Baku instead? I find it difficult to express the very meaning in their eyes when they were in Baku…. We could demonstrate our economic power to them through our city. I believe the Baku night turned to be one of strange nights for them. They realized that they have achieved nothing. We could demonstrate this reality to five Armenian intellectuals. That was the very aim of our visit.

Azad-Hye Note: It seems that the last few sentences have no relation with the general spirit in which the interview was conducted and they contradict the earlier views of the Azeri intellectual Mr. Kamal Abdulla. Regardless of those lines (and some other comments in the text), we can consider the interview as a positive step towards expressing good intentions towards a neighboring nation. We are pleased to know that Abdulla is enthusiastic about similar joint programs with Armenia in the future.