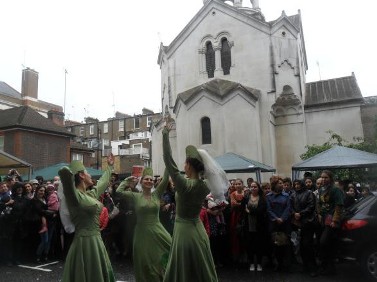 Celebrating Armenian heritage, culture and cuisine in the streets of London

The Primate's Office of the Armenian Church of United Kingdom and Ireland organized on 12 June 2011 the first Armenian Street Festival in London in cooperation with the Royal Borough of Kensington and Chelsea in London.

The festival followed church services on the Feast of Pentecost. It included an impressive programme of entertainment including Armenian songs, music and dance, as well as a children?s area with puppet show, bouncing castle, and other activities.

There were stalls with vendors selling paintings, books, jewellery, arts and crafts. Delicious Armenian food and grills (Khorovadz) were available for purchase in Gulbenkian Hall as well as grills on the churchyard. The Iverna Gardens Street was turned into a public plaza with two big tents where people sat and enjoyed the Armenian music, dance and the delicious food, as well as the beautiful backdrop of the St. Sarkis Church and its grounds.

Dignitaries and guests were invited as well as residents of the local community.

Dozens of Armenians volunteered to make the festival a success.

In a posting on social networking the V. Rev. Dr. Vahan Hovhanessian, Primate of the Armenian Church of United Kingdom and Ireland said: “Thank God, and despite the rainy forecast, the first Armenian Street Festival in the UK (Kensington, London), sponsored by the Primate's Office of the Diocese of the Armenian Church of the UK, was a smashing success. Thank you to all, volunteers, performers, guests and dignitaries. It was truly a powerful celebration of our identity, culture and heritage. See you at next year's Armenian Street Festival. Date to be announced soon!”