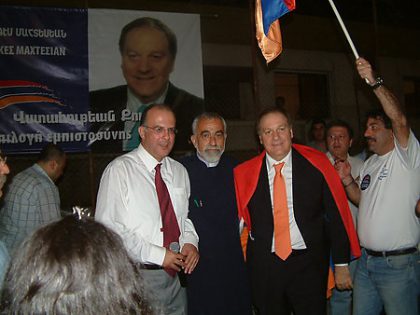 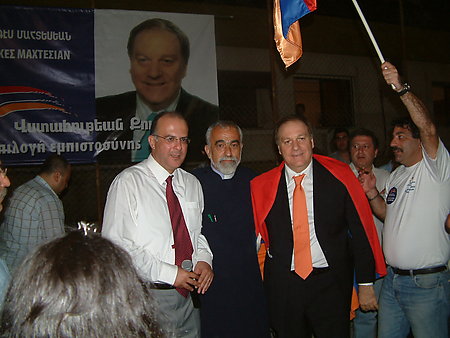 Under the terms of the constitution of the , the Armenians, Maronites and Latins, officially termed as religious groupings, elect their own representatives who deal with only educational and religious matters, but are usually members of parliamentary sub-committees. They have no vote on other matters in parliament.

The Cypriot Armenian community has three elementary schools – in , Larnaca and Limassol, which come under an overall committee appointed by the elected representative. These schools are entirely financed by the Cyprus Ministry of Education and Culture and children of Cypriot Armenians attend free of charge.

Mahdessian was the candidate of the Dashnak party while Atamian was supported by the Ramgavars, Hentchaks, the AGBU clubs and the small Shahumian grouping attached to the communist party.

Then, just as in the present case, one of the main topics during the electioneering campaign was the unilateral decision of the AGBU Board to close down the Melkonian Educational Institute, which created a serious breach in the non-dashnak camp.

Meanwhile, in the Cypriot parliamentary elections, which were also held on Sunday 21 May 2006, Marios Garoyan (Armenian from his father's side and Greek from his mother's) became the first Armenian to become a full member of the House of Representatives (parliament).

In a brief statement during celebrations at Mahdessian's election he said: “Now we will have two Armenian voices in the Cypriot legislative”. Ha was elected on the ticket of “Dimocratiko Komma” (Democratic Party – DIKO) founded by former Cypriot President, the late Spyros Kyprianou and currently led by President Tassos Papadopoulos. For the past three years, Karoyian was the Director of President Papadopoulos' Political Office and often acted as government spokesman.

In the parliamentary elections, the Cyprus Communist Party AKEL secured 31.13 percent of the cast votes, very closely followed by the Democratic Rally (right wing) with 30.34 percent, while President Papadapoulos' Democratic Party could only muster 17.91 of the votes, and the local socialist party EDEK clinched 8.92 percent. Ecologists and Environmentalists collected 1.95 percent. 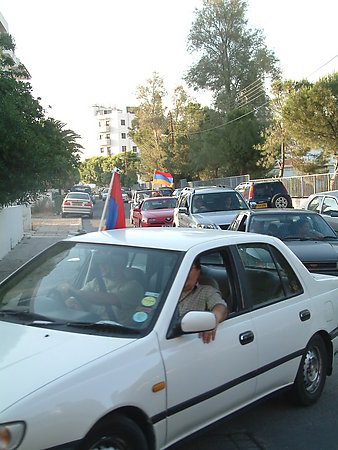 Highlights of Mahdessian's manifesto include improvement of the living conditions and problems of compatriots from and other countries, get more Armenians to serve on government boards, secure additional funds from European Union programs for the needs of the community. He also promises to be “the impartial representative of all members of our community, because we can only achieve our goals through cooperation.”

Mahdessian pledged full support to the Armenian Patriarch of Constantinople in the fight against the closure of the Melkonian, as well as the Melkonian Alumni Association's efforts to find a solution to the problem of the Melkonian, the only Armenian boarding high school in the Diaspora.

– Number of people voted in favor of Dr. Vahakn Atamian: 810

– Number of invalid or blank votes: 53

– On the evening of the election-day and as the results were announced hundreds of Armenian fans paraded with their cars in the areas populated by Armenians in .

– The newly elected representative Vartkes Mahdessian thanked the Armenian community and called his victory a fresh page in the community's history.

– More than 1.000 people celebrated the victory at AYMA stadium with all-night party. Armenian and Cypriot flags covered the scene.

– Marios Garoyan becomes the first Cypriot Armenian to be elected directly to the Cyprus Parliament. Garoyan won a seat with the Democratic Party (also known as DIKO) in the district.

– Another Armenian M. Sarkissian (competing for the communist AKEL's seat in Limassol district) did not manage to win.

– It is worth informing United Arab Emirates (UAE) readers that Mahdessian has branch of his business in Sharjah, the third largest city in the UAE.

1- Two members of the parliament Garoyan and Mahdessian address the public in AYMA stadium, . Many years ago Garoyan has been a football player in AYMA. In the middle Catholicosal Vicar to Cyprus Archbishop Varoujan Hergelian.

2- Armenians celebrate in the streets of .